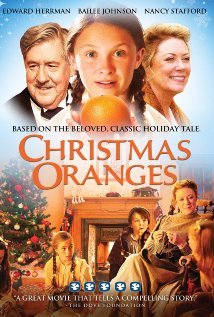 CHRISTMAS ORANGES is an endearing drama. It opens with Rose’s young mother leaving her as a baby on the doorstep of Greenwoods Orphanage, where she’s welcomed by Mrs. Hartley and the other orphans. Due to unexpected events, Rose and the orphans are split up. They are either adopted or sent to other orphanages. Rose is taken to Iron Gates Orphanage under the care of Mr. Crampton, a fair but hard man. Rose runs away, but learns the reasons for Mr. Crampton’s behavior. She returns and brings forgiveness and reconciliation.

CHRISTMAS ORANGES is a good movie with solid acting by Bailee Johnson and the supporting cast. The movie has a strong Christian, moral worldview. There are only a few minor issues. First, there are a few times where the dialogue and setting are a bit too modern for the period. Also, more growth or transformation in Rose’s character would make the story even more compelling. Her character sometimes is rebellious. Finally, an ultimate twist should have come earlier during the movie’s climax. Otherwise, CHRISTMAS ORANGES is a fine movie for the entire family.

(CCC, BBB, V, M) Very strong Christian, moral worldview as characters show charity and kindness to orphans and character sacrifices for the children and the children sing Christmas carols about Christ such as “What Child Is This?” and “Silent Night”; two deaths from influenza; no foul language; no sexual content; no nudity; no alcohol use; no drug use; and, some lying, disobeying rules, vengeance, young mother abandons her baby at an orphanage.

CHRISTMAS ORANGES is an endearing movie.

The movie opens with Rose’s young mother leaving her as a baby on the doorstep of Greenwoods Orphanage, where she is welcomed by Mrs. Hartley and the other orphans. Mrs. Hartley is the only mother Rose has ever known. When Mrs. Hartley dies unexpectedly, Rose (Bailee Johnson) and her family of orphans are split up, adopted, or sent to other orphanages. Rose is taken to Iron Gates Orphanage under the care of Mr. Crampton, a hard but fair man. Rose soon learns he’s not at all like her beloved Mrs. Hartley.

During Rose’s stay at Iron Gates, she meets Emily, who becomes her dearest friend and two antagonists, Gilbert and Celeste. She also meets Joe, Mr. Crampton’s brother. Joe is kind and benevolent and brings the children an orange for Christmas every year despite Mr. Crampton insisting this tradition is frivolous.

Rose looks forward to tasting her first orange Christmas day. However, in her excitement she breaks the rules. Mr. Crampton forbids her to have her orange and speaks harshly to her, so Rose runs away. While away, she discovers why Mr. Crampton is so bitter and is urged by Joe to return to Iron Gates. Upon Rose’s return, she brings forgiveness and an opportunity for reconciliation between Mr. Crampton and his long lost daughter.

CHRISTMAS ORANGES is a good movie with solid acting performances by Bailee Johnson and the supporting cast. There are a few times in which the dialogue and setting are a bit too modern for its time period. However, overall, the movie is nicely shot and is well cast.

As the storyline unfolds, Rose’s character remains constant. She’s a humble yet charming girl who cares for others and even feels sorry for those who treat her harshly. Her only character flaw seems to be she doesn’t always follow the rules, but even this isn’t with any malicious intent. More growth or transformation in Rose’s character would make an even more compelling story. Lastly, a final twist comes near the end credits, but it should have been revealed earlier during the story’s resolution.

CHRISTMAS ORANGES only has a few minor questionable elements. There’s the problem of the mother leaving behind her baby. Also, there are two deaths due to influenza. CHRISTMAS ORANGES has a strong Christian, moral worldview. Mrs. Hartley and Joe show charity and kindness to Rose and the other orphans. Also, Mrs. Hartley sacrifices for the children. Finally, the children sing Christmas carols about Christ such as “What Child Is This?” and “Silent Night.”