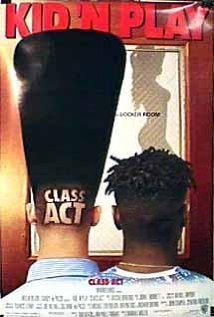 CLASS ACT is about two high school students, a brainy bookworm and a street-smart hoodlum, who switch identities. Punctuated with slang and vulgarity, the movie falls flat with two major flaws, approval of teenage rebellion and sexual promiscuity, which should discourage conscientious teenagers from viewing it.

CLASS ACT is about two high school students, a bookworm and a hoodlum, who switch identities. Punctuated with slang and vulgarity, the movie falls flat. Duncan Pinderhughes and Blade Brown meet during their senior year at a Black high school. Blade is warned by his parole officer that unless he completes high school with better than average grades, he will be subject to incarceration at an adult prison. Meanwhile, Duncan is a straight “A” student in jeopardy of losing an Ivy League scholarship because of his inability to pass P.E. On the first day of school, Duncan and Blades’ files are mistakenly switched. Before Duncan can get to the principal to correct the faux pas, Blade persuades him to carry out the charade or suffer the consequences. What follows is the not-so-funny attempt to fool the school.

The most favorable point the movie makes is an opposition to drug use, albeit weak. However, this nod to wisdom is countered by a bellowing approval of illicit sexual encounters, so long as the participants practice “safe sex.” Of course, this movie’s approval of teenage rebellion and sexual promiscuity should discourage conscientious teenagers from viewing it.