"Love and Support Your Family" 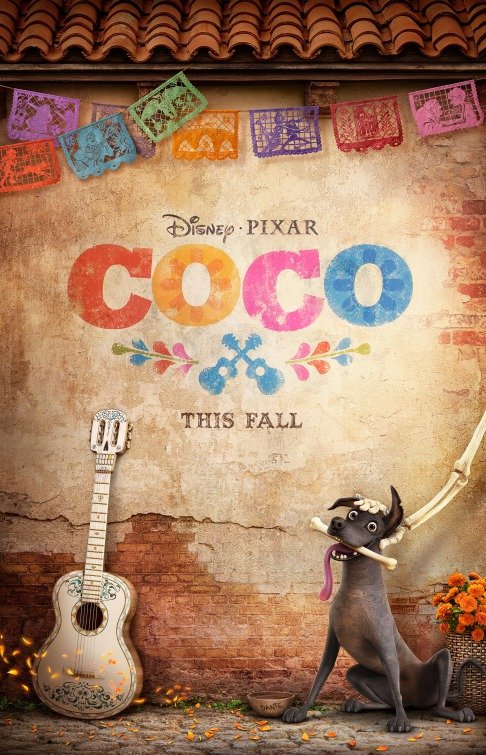 COCO is a Pixar animated fantasy about a young boy named Miguel in Mexico who dreams of becoming a musician, but who’s forbidden to pursue this by his family. They have a strong generational prejudice against music. When Miguel steals a guitar from a famous Mexican musician’s memorial, whom he believes is his great-great-grandfather, he’s transported to the “Land of the Dead.” Stuck in the land of the dead, Miguel undertakes an adventure to find his long-lost grandfather, who actually abandoned his family, so Miguel could pursue his musical dreams.

COCO has some strong moral, redemptive messages about loving your family even when it’s hard, being a committed husband and father, and being willing to forgive. It also has some positive Christian references. However, it’s set around a Mexican holiday that’s all about mystical paganism and doesn’t fit a biblical view of the afterlife. Caution is advised for older children due to scary images and the movie’s objectionable worldview elements. Families who consider viewing COCO with their older children should be ready to discuss COCO’s positive and negative themes and values.

Dominant Worldview and Other Worldview Content/Elements:
Pagan worldview surrounding the mystic, superstitious Mexican holiday Day of the Dead, with pagan views of the afterlife and pagan ceremonies such as lighting incense for the dead and occult spirit guide creatures, plus some light Romanticism about following your heart at all costs, but the extreme version of this immoral Romantic idea is refuted in the end, as well as light moral worldview stresses forgiveness, loving and appreciating your family and relatives, and sacrificing your dreams in order to stand by your loved ones, crucifixes on walls, graves with crosses, churches, and vague references in movie clips to “having faith”.
Foul Language:
No foul language, but one use of “heck”.
Violence:
Moderate violence for an animated movie, including a plot that surrounds death, a singer dies because a giant bell falls on him, one person murders another through poison, lives are threatened, and some scary images of skeletons and big fantasy creatures.
Sex:
No sexual content, but Mexican singer gets attention from the ladies, and in one movie he acts in is shown kissing a woman.
Nudity:
No nudity, but in the Land of the Dead, a lady skeleton is posing “nude” in a studio (but she’s literally all bones), so the nudity is implied.
Alcohol Use:
Light drinking.
Smoking and/or Drug Use and Abuse:
No smoking or drugs.
Miscellaneous Immorality:
Stealing (which is punished), lying and nonsexual crossdressing in a few instances.

COCO is a Pixar animated fantasy adventure about a young boy in Mexico who dreams to be a musician, but is forbidden to pursue this from his family because of a generational prejudice against all things musical. COCO is a colorful story that falters in the middle, but resolves itself in the end. However, it’s not without some questionable messages and iconography that require caution.

In the movie, Miguel is a 12-year-old boy whose family has been shoemakers for generations. Miguel tells a story of how his great-great-grandfather was a talented musician, and chose to abandon his wife and daughter in order to pursue his musical dreams. Because he abandoned his family, his wife lived without him, became a successful shoemaker and passed down this skill to future generations. The only rules are that the family must always stay away from music and must never mention the great-great-grandfather again.

Miguel loves to sing and play the guitar (secretly of course). He idolizes the talented and memorialized Ernesto de la Cruz, the most famous musician in Mexico’s history. Based on a picture, he deduces that Ernesto is actually his great-great-grandfather. Miguel wants to perform at the village’s talent show, but when his family finds out, his grandmother destroys Miguel’s makeshift guitar.

Miguel runs away and decides to steal Ernesto de la Cruz’s guitar that hangs at his memorial in order to use it at the talent show. However, as soon as he grabs the guitar, his body becomes invisible to the land of the living, but visible to the dead. He sees skeletons of people all across the cemetery who have traveled from the Land of the Dead to see their families on the Day of the Dead. Miguel is found by his dead skeleton relatives who were on their way to visit the altar Miguel’s family left for them. Concerned that Miguel, who’s living, can see them, they take him back to the Land of the Dead to resolve the issue.

In the Land of the Dead, Miguel meets his great-great-grandmother, Mamá Imelda. They learn that Miguel needs to receive a blessing from one of his relatives to return to his living form, but he needs to do so by sunrise or else he’ll be stuck in the Land of the dead forever. Mamá Imelda begins to give Miguel her blessing, but adds a condition that he may never do music ever again. Miguel becomes angry and refuses. He runs away from Mamá Imelda and concocts a plan to find his great-great-grandfather Ernesto, the famous musician, to give Miguel his blessing, because he’d understand Miguel’s dreams of pursuing music. To find Ernesto, Miguel teams up with a trickster named Hector, who’s desperate to get his picture back to the Land of the Living so he won’t be forgotten forever.

Can they find Ernesto before it’s too late for Miguel?

COCO is a colorful movie with terrific animation and beautiful, catchy music. Sadly, though, once Miguel enters the “Land of the Dead,” the story falters and becomes uninteresting, scary and occult. However, right before the movie’s final act, there’s a surprising twist that changes the character dynamics and adds emotional resonance.

COCO at times has a light moral message about loving your family, even when it’s hard. It also promotes forgiveness.

Other times, however, the story has negative messages, though some of the negative messages are redeemed and turned around by the end. For example, one character says she can’t forgive another character because of their terrible actions. The line she says is pretty harsh and makes it seem like the movie will end on an unforgiving note, but an image at the end implies she does in fact forgive the other person. Also, a good portion of the movie seems like it’s promoting a Romantic message that it’s okay to forsake your family for a dream, but this idea eventually is rejected. Hopefully, children will follow the moral arcs all the way through to the conclusion. Otherwise, they could pick up on some bad values just based on a few bad decisions characters make. Parents should discuss the importance of forgiveness and family with their children nonetheless. Surprisingly, the ending reinforces the positive value that we shouldn’t pursue our dreams at any cost, because some things, like supporting your family, are more important.

One of the biggest problems with COCO, though, is the Mexican holiday around which the story revolves, the Day of the Dead, which is a mixture of beliefs about honoring past heroic Christians, who have gone to Heaven on “All Saints Day” on Nov. 1 each year and mystic, occult superstitions from Mexico’s indigenous people that the Catholic Church originally condemned. Viewers actually see this in the movie when the family sets up incense at an altar in a room (a pagan ritual), while on the wall a crucifix is prominent. The question is, is the family Roman Catholic with cultural, pagan traditions? Or, is the family pagan, with Catholic, cultural traditions? Therein lies the problem with the movie’s pagan syncretism.

Regardless, MOVIOEGUIDE® advises strong caution for older children for COCO due to some scary images and its objectionable, problematic worldview content. For families who may consider viewing COCO with their older children or grandchildren, here are some discussion questions they can use to create educational theological dialogue with their youngsters:

What does the Bible say about the afterlife?

How are we able to enter Heaven, according to Jesus?

What does the Bible say about forgiveness, and who in COCO must choose to forgive?