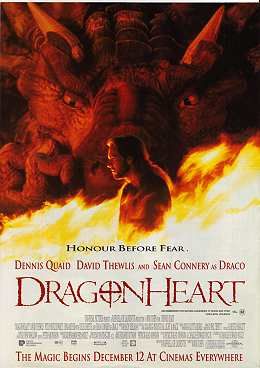 DRAGONHEART tells the story of one of the last of the noble knights, played by Dennis Quaid, who joins forces with a dragon and the peasants to overthrow an evil king. DRAGONHEART is a confused mythic mix of Christianity combined with pagan and occult myths. Furthermore, the script meanders, loses focus and is too talkative. It is regretablle that a movie with so much potential and such great special effects should be so lackluster.

(B, C, Pa, NA, L, V, S, A, M, B) Moral worldview in a mythic setting where Christianity and paganism are combined into a confused New Age amalgam; 3 exclamatory profanities & 1 obscenity; action violence and battle scenes with little bloodshed, but some cruel scenes such as an implied blinding, implied castration, a subtle sub-theme of a mother saying she should have killed her son, the King, and a son killing his mother (off screen); no overt sex except that the King tries to force himself on Kara; no nudity; some drinking; and, deception rebuked & Scripture quoted frequently.

DRAGONHEART opens in 984 England with Dennis Quaid playing Bowen, one of the last of the noble knights, who teaches the young prince Einon how to sword fight. When the Prince’s malevolent father, the King, ruthlessly attacks a peasant village, the Prince heads off to battle. The King is mortally wounded, the Prince seizes the crown, but he mortally wounds himself. Bowen takes him to the Queen, who takes him to a dragon. She implores the dragon to heal the Prince. The dragon says he will do so only if the Prince promises to live by the old Code. The Prince promises, and the dragon gives the Prince half of his own heart. Twelve years later, the Prince has grown up to be a malevolent ruler, ruthlessly exploiting the people to build his new castle. Bowen joins forces with the Dragon and other freedom fighters to overthrow the King. It is then that we realize that the King will only die if the beloved dragon dies since they share a heart.

Although free from foul language, nudity, sex, and ruthless violence, DRAGONHEART is a confused mythic mix of Christianity combined with pagan and occult myths. Beyond the philosophical problems, the script does not sustain the weight of the story. It meanders, loses focus and is too talkative in many places. It is unfortunate that a movie with so much potential and such great special effects should be so lackluster.