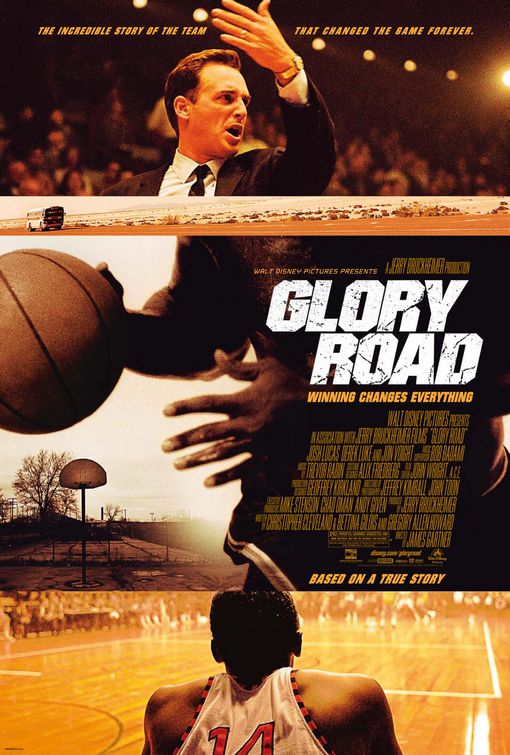 GLORY ROAD tells the true story of the 1966 Texas Western basketball team’s arduous season that culminated with an NCAA championship. Josh Lucas plays Don Haskins, a coach determined to find success on college basketball’s grandest stage. With no recruiting budget and waning support, the coach’s assignment to turn the program into a winner is a tall task. By aggressively recruiting African-American players from northern cities, a daring move in the Deep South at the time, Haskins builds a team that sneaks up on the basketball establishment. Their growing success on the court, however, is greeted by racially motivated persecution that increases with each win.

With convincing acting and a redemptive message, GLORY ROAD is a winner, full of teamwork, drama, heart, and soul. Played during several scenes, GLORY ROAD’s theme song is the gospel spiritual “People Get Ready,” a soul-stirring anthem appropriate for the story. The team’s victory on the court, as well its social implications, is portrayed as a situation made possible by a sovereign God. Coach Haskins’ commitment to doing the right thing, and his faith that doing so would pay off, is a moral lesson that’s worth sharing.

(CCC, BBB, RH, Pa, Ro, FR, LL, VV, S, N, AA, MM) Very strong Christian worldview with elements emphasizing self-discipline, the importance of hard work, self-sacrifice for the benefit of others, making moral choices despite persecution or pressure to do otherwise, plus several positive Christian references, including a basketball team praying prior to a game, several gospel songs played throughout the movie, with slight revisionist history regarding portrayal of Adolph Rupp and other elements of the South, plus light pagan and Romantic elements, and one character speaks briefly of Malcolm X and his distorted Black Muslim movement in a few scenes; twenty very light and often muffled obscenities and no profanities, but a number of racial slurs throughout movie; several cases of racially motivated violence, one in which African-American character is beat up in bathroom and his head is dipped in toilet; kissing and suggestive dancing; upper male nudity throughout, though never in a sexual context; light alcohol abuse in two scenes; and, a large number of sinful actions motivated by racism, including extortion and unkindness.

GLORY ROAD tells the true-life story of the 1966 Texas Western basketball team’s arduous and inspiring season that culminated with an NCAA championship. With convincing acting and a redemptive message, GLORY ROAD is a winner, full of teamwork, drama, heart, and soul. If you liked REMEMBER THE TITANS, you will love GLORY ROAD. I (Ted) wept and cheered GLORY ROAD.

Josh Lucas plays Coach Don Haskins, a Southern-drawled flame-thrower determined to find success on college basketball’s grandest stage. After spending several years working with high school teams, Haskins finds his big break when offered the head coaching position at Texas Western. With no recruiting budget and a waning, apathetic group of supporters, the coach’s assignment to turn the program into a winner is a tall task. Haskins aggressively approaches his less-than-ideal circumstances with a recruiting strategy highly unconventional among Southern schools. By recruiting a group of players consisting mostly of African-Americans from cities all over the country, a daring move in the Deep South at the time, Haskins builds an impressive team that sneaks up on the college basketball establishment. Their growing success on the court, however, is greeted by racially motivated hate and persecution that only increase with each victory.

Although its delivery certainly exceeds Hollywood’s ever-decreasing standards, GLORY ROAD works because of the movie’s inspiring story. It’s interesting to watch the subtle but significant evolution of Coach Haskins as the movie progresses. As a coach expectedly obsessed with victory, Haskins recruits black players not to make a social statement, but to win basketball games. From the outset, Haskins appears almost oblivious to the Southern taboo of recruiting and playing African Americans, and seems unaffected by comments and warnings from the college administration and supporting alumni. Coach Haskins is, essentially, colorblind. As the team becomes more accustomed to winning, however, it also faces increasing harassment, forcing Haskins to acknowledge the ugliness of racism.

After returning home from a road game, Haskins is approached by his visibly shaken wife, who, like the team’s players, has received violent threats from the Ku Klux Klan. At this point, the coach finally seems to realize that he’s in the center of a cultural firestorm, and that the significance of his decisions extends far beyond the basketball court. Like his approach to basketball, the coach meets the social challenges head on and works to overcome difficulty with a commitment to perseverance and hard work.

“This is more than just a game now,” the feisty Haskins sneers, “I sure can’t quit on it.”

Haskins’ team reflects the unstinting leadership and character of their coach. Despite struggling with racial tensions, they develop a close bond that helps them succeed as champions.

Jon Voight is outstanding as Kentucky coach Adolph Rupp, but the story exaggerates the legend’s flaws. More revisionist history is included during the championship game against Kentucky, in which the large assemblage of Kentucky fans are depicted waving confederate flags. These embellishments are unnecessary for such a compelling story, and underestimate the audience’s ability to recognize the nuances and complexity of the vile racism that plagued the Old South.

Also, there are some muffled obscenities, racial slurs, some drinking, raucous scenes in a African American party, and carousing. There is even a reference to Malcolm X and his black power movement. Furthermore, one white athlete is taught that “bad is good” and “good is bad” in black slang.

On the other hand, church is strongly commended by a player’s mother, one player leads the team in prayer, and various postive references are made to the Christian faith. Played during several scenes, GLORY ROAD’s theme song is the gospel spiritual “People Get Ready,” a radiant soul-stirring anthem very appropriate for the story. “People get ready, there’s a train a comin’ / You don’t need no baggage, you just get on board / All you need is faith to hear the diesels hummin’ / You don’t need no ticket, you just thank the Lord.” It’s encouraging that, however subtly implied, the team’s victory on the court, as well its social implications, is portrayed as an act of a sovereign Lord. Coach Haskins could not have planned for the firestorm of which he became a part, but his commitment to doing the right thing, and his faith that doing so would pay off, is a moral lesson that’s worth sharing.