"The Long Winded Story of the Invincible" 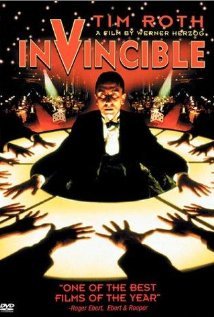 INVINCIBLE focuses on Zishe, a Jewish blacksmith. Zishe’s enormous strength is revealed in when he silences four anti-Semitic men in a restaurant. His fame spreads to Berlin, from which a recruiter comes to hire Zishe. Zishe travels to Berlin to work as the strongman for Hanussen (Tim Roth), a German illusionist at the House of the Occult. Hanussen’s greed and manipulation contrasts with Zishe's innocence. When Zishe reveals that he is a Jew, it causes an uproar, but he is welcomed as a leader of the Jewish community.

INVINCIBLE contrasts a pagan worldview with a Judeo-Christian worldview. There are numerous images of rituals like Passover in an orthodox Jewish family and Biblical references. As the anti-thesis, Hanussen's house of the occult depicts black magic, psychic powers, new ageism, and other demonic themes. INVICIBLE also has subtle sexual inferences and womanizing. INVINCIBLE is based on a great story, but the movie was far too long. Also, having the actors speak English with German accents produced seemingly poor acting. Despite these things, INVINCIBLE tells a heroic story of a man who should be honored for his courage to stand up against Nazi Germany to redeem his people.

(BB, OOO, PaPa, AbAb, V, S, NN, AA, D) A strong biblical and world view is seen in Zishe’s religious and cultural life as a Jew, including quotes such as: “God made me strong for a reason,” “Sometimes we don’t understand why God does the things He does,” “My children are the salt of the earth,” “I thank God for my family and children,” and several biblical references are made to Proverbs and Psalms, the Day of Atonement and Passover are illustrated, there are several scenes talking specifically about God, and there are several scenes taken place in the synagogue as well as a major occult theme illustrated through black magic, psychic powers, mediums, trances, new ageism, cosmology, hypnotism, levitation and Hanussen’s house of the occult, with brief instances of anti-Semitism normal for Nazi Germany; some crude sexual jokes and inferences; brief instances of violence including a fight, wrestling match, and a brawl; womanizing; partial nudity during the dance sequences with the show girls and Zishe’s’ strongman scenes; 2 scenes involving alcohol, one of which is more explicit with the Nazis partying on a boat; and, rare instances of smoking.

INVINCIBLE opens with a glimpse of daily shtetl life in an eastern Polish marketplace during the 1930s. The lively scene soon focuses in on Zishe Breitbart (Jouko Ahola), a Jewish blacksmith, and his nine-year-old, articulate and insightful little brother, Benjamin (Jacob Wein). Zishe’s enormous strength is quickly revealed in the next scene when he is involved with a fight, silencing four anti-Semitic men in a restaurant. To pay for the damages, he competes with and defeats the strongman of the local circus and becomes known as a strongman himself.

His minority celebrity status spreads to Berlin, from which a recruiter comes to hire Zishe. Tempted by the flashier city life of Berlin and wanting to find his own identity, a purpose of God’s gift to him, Zishe travels to Berlin and finds himself working as the strongman for Hanussen (Tim Roth), a German illusionist at the House of the Occult.

Hanussen’s well-disguised greed for power and his mastery of manipulation contrasts with the innocence and purity of the simplicity of Zishe. Hanussen is introduced as a man of great influence over Nazi Germany and its leaders. He is not only a provider of great entertainment to the Nazis, but Hanussen is also a self-proclaimed prophet, who foresees the coming reign of Hitler. Hanussen “Aryanizes” Zishe since no German citizen will be able to accept a Jew being so strong. Zishe is transformed and quickly becomes a sensation.

Before the fame gets to Zishe’s head, his little brother, Benjamin, and his mother come visit him. Benjamin hardly recognizes Zishe. Benjamin, acting as his older brother’s unstated conscience, tells Zishe how much Zishe has changed. Benjamin’s words have great impact on Zishe and he is suddenly transformed by realizing a purpose of his life and reveals his true identity as a Jew to the audience. This causes an uproar in the Nazi party, but incites cheer within the Jewish community. Zishe is quickly welcomed as a leader of the Jewish community in Berlin and steps out into his calling as the new Samson. This new Samson also receives a prophetic dream one night about the horrible fate of his people.

Zishe’s genuine romantic interest for Marta (Anna Gourari), the piano player, eventually leads to a conflict with Hanussen. Hanussen’s fall from glory comes shortly after a series of events and Zishe returns home. After overcoming the trials and difficulties in Berlin, Zishe finds obstacles at home when he tries to mobilize his village to prepare for the impending doom he saw in his dream. The story has an ironic end for a man who considered himself to be as invincible as Samson.

INVINCIBLE contrasts a pagan occult worldview with a Judeo-Christian worldview. There are numerous images of Jewish principles and rituals like Passover in an orthodox Jewish family and Biblical references. As the anti-thesis, Hanussen and his house of the occult depict black magic, the occult, psychic powers, new ageism, and other demonic themes. Because of the large portion of the movie devoted to showing the occult, this movie is not recommended for young children. There are also some instances of violence through fights and large brawls. INVICIBLE also has subtle sexual inferences and womanizing.

The story of Zishe in INVINCIBLE is a great one that should be told, but the movie itself needed some to spend more time in editing. The movie was far too long and took a painfully extensive time to develop the characters. The development of Hanussen’s character took away from Zishe and was rather distracting. Also, having the actors speak English with German accents produced seemingly poor acting. Despite these things, INVINCIBLE tells a heroic story of a man who should be honored for his courage to stand up against Nazi Germany for a redemptive purpose of his people.