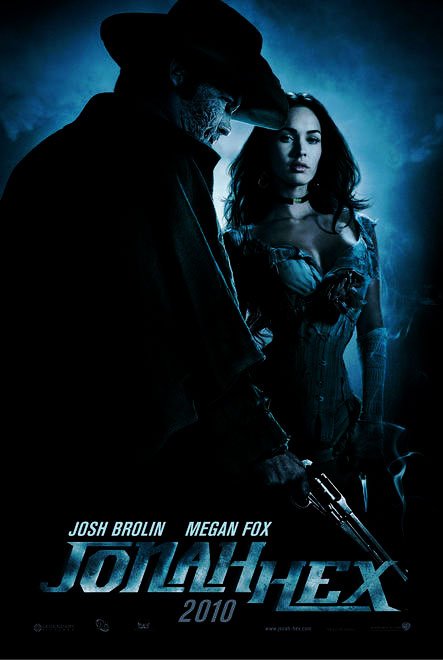 Josh Brolin stars in JONAH HEX, a supernatural western thriller. Jonah’s family is murdered after he shot it out with his Confederate superior’s son when Jonah refused to help burn down a hospital. John Malkovich plays the Confederate colonel, Turnbull. Years later, Turnbull is still alive. This time he’s threatening the whole country with a powerful new weapon. President Grant orders his men to get help from Jonah Hex, whose bounty hunter reputation precedes him. Jonah agrees but he also wants to get revenge against the evil Turnbull for killing his wife and son.

JONAH HEX is a strange mix of spaghetti western, terrorist action thriller and supernatural horror. As such, it doesn’t try to stray too far from its B movie roots. This keeps it relatively fun and entertaining without being overbearing. That said, it has some occult themes, foul language, strong violence, and sexual innuendoes. The main plot, however, is to stop the evil villain from killing more innocent people. Please go to Movieguide.org for more details on this or any other movie. It will protect your family from being unpleasantly surprised when the theater lights go down.

(PaPa, BB, C, OO, LL, VV, S, N, A, DD, M) Strong, somewhat mixed, pagan worldview with some biblical, moral and backhanded Christian elements, including references to Hell and the powers ruling Hell (a character tells the hero that the powers of Hell are waiting for him when he dies because they have plans for him) and anti-hero works with U.S. Government after the Civil War to stop a terrorist planning on destroying Washington, D.C. with a powerful new weapon, mixed with a revenge motif that includes a prostitute character who wants to go away with the hero, plus some overt occult references to anti-hero’s power to wake a dead person and get information from them, which he does twice, and to the hero getting healed from unmentioned magical American Indian powers; 10 or 11 obscenities (two or three during the end credits in a song) and three strong profanities; strong violence includes shootouts, explosions, villain destroys a town with powerful new weapon and blows up a train car with people on it, hero has dynamite gun, fighting, hero has power to wake up people’s dead corpses and get information from them and he does this twice, and villain burns hero’s house down with his wife and child in it but their deaths are not shown; implied prostitution as customer pays female lead’s character, implied fornication and hero lies in bed with woman who loves him, and she kisses his bare chest; upper male nudity and female cleavage, especially in scenes where female lead’s character wears only a corset outfit; alcohol use; smoking and a vague reference to Indian peyote smoking (the word peyote is not mentioned); and, revenge motif is not really rebuked and movie contains some spooky moments.

JONAH HEX is a supernatural western about a bounty hunter in the Wild West with supernatural protection, who is hired by the American government to stop a terrorist plot led by his old nemesis.

Josh Brolin stars as the title character, Jonah Hex, whose family was killed after he shot it out with his Confederate superior’s son when Jonah refused to help them burn down a hospital. John Malkovich plays the Confederate colonel, Quentin Turnbull.

After killing Jonah’s wife and son, Turnbull leaves Jonah for dead, deliberately branding his face. Some Crow Indians rescue Jonah, however, saving him from certain death. Their mystical healing makes Jonah harder to kill. He also has the power to wake the dead and get information from them. After hunting for Turnbull, Jonah comes to believe that he died in a fire.

Jonah then becomes a bounty hunter. He brings three dead criminals into a small western town, but the officials refuse to pay him and try to kill him. Jonah succeeds in killing them instead, and he pins the late sheriff’s badge on the blacksmith as he leaves town.

Meanwhile, it turns out that Turnbull is very much alive. Not only that, but he is stealing parts for a powerful new weapon to attack the U.S. government out of spite. President Grant orders his men to get help from Jonah Hex, whose reputation precedes him. Jonah agrees. but he also wants to get revenge against the evil Turnbull for killing his wife and son.

JONAH HEX is a strange mixture of spaghetti western, terrorist action thriller and supernatural horror. As such, it doesn’t try to stray too far from its B movie roots, which is a good thing. The movie is fun and entertaining without being overbearing. As usual, John Malkovich makes a striking villain.

That said, JONAH HEX has some occult themes, foul language, strong violence, and sexual innuendoes. JONAH HEX also, however, has some strong moral content as the hero tries to stop the evil terrorist villain from killing more innocent people.