"Hilariously Learning to Do the Right Thing" 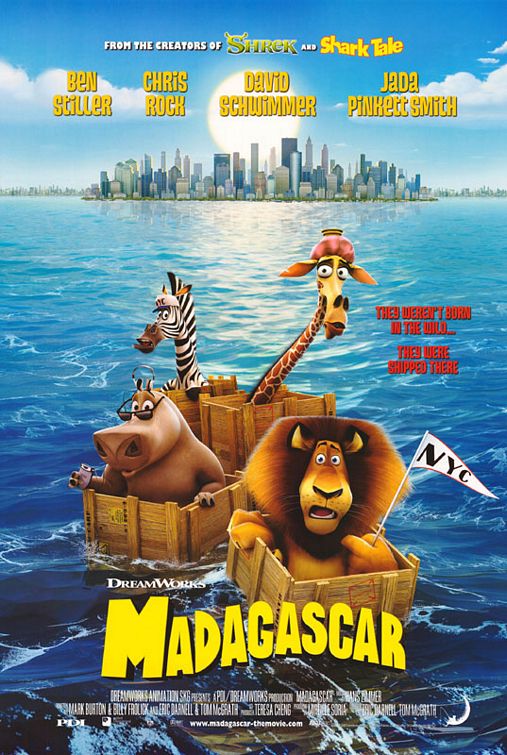 MADAGASCAR, the new animated feature from DreamWorks, tells the story of Alex the lion, Marty the zebra, Melman the giraffe, and Gloria the hippo. Marty wants to leave the Central Park Zoo to see the wild, and Alex, Melman and Gloria try to stop him. After an unsuccessful escape, animal rights activists convince the zoo to send the animals back to Africa, but their crates break free and they float onto the island of Madagascar. On the island, Alex and his friends quickly realize that they preferred life in the zoo. When Alex realizes that he’s going native and even tries to bite his best-friend Marty, he runs off to protect his friends, and Marty has to risk his life to rescue Alex.

MADAGASCAR manages to be laugh-out-loud hilarious, while refuting Jean-Jacques Rousseau’s philosophy of the noble savage by urging its heroic creatures to adopt self-discipline and abandon their baser instincts to become civilized, careful, thoughtful, and self-sacrificing. Some light scatological humor, suggestions of violence and a couple scary scenes make MADAGASCAR more appropriate for ages seven and up, but it is otherwise an excellent summer film for families.

(BBB, CC, L, V, A, D, M) Very strong moral worldview with solid Christian principles about learning to overcome our baser instincts to do the right thing, mitigated by some scatological humor but also with self-sacrifice, loyalty, compassion, forgiveness, and other Christian traits; seven light obscenities such as butt and hell; action violence, pratfalls and some scatological violence such as animals get squashed, animal gets its head stuck in subway, lion bites rear end of best friend zebra, animals take pratfalls, hungry dingo-like creatures attack animals, lion visualizes friends as steaks; no sex; no nudity; animals drink and spit out seawater cocktails; animal has hallucinations twice after being struck by drug dart; and, reference to bad luck which is not directly refuted for the benefit of the little children but refuted in fact by the storyline.

MADAGASCAR, the new feature-length cartoon from DreamWorks, is laugh-out-loud hilarious, and it refutes the whole noble savage philosophy of French intellectual Jean-Jacques Rousseau by urging its heroic creatures to adopt self-discipline and Judeo-Christian virtues. Although there is some scatological humor, at its core, this movie is a morality tale with great messages. And, the messages are clear.

MADAGASCAR opens at the Central Park Zoo in New York City, where the animals live in luxury. They are groomed, personally trained and treated like superstars. Alex the lion is the zoo’s star, posing for adoring fans and being treated nightly to gourmet steak dinners delivered just the way he likes them. Little does Alex realize that the steaks he so loves originally come from other animals. As for the other animals, they are almost equally spoiled, as every night a troop of chefs serve delicious dishes catered to each animal’s desires.

Alex’s best friend, Marty the zebra, however, wants to see the wild. At Marty’s birthday party, Alex, Melman the giraffe and Gloria the hippo try to talk Marty out of leaving the zoo. But, Marty’s wanderlust is inflamed by four brilliant, prodigious penguins tunneling their way to Antarctica, and Marty escapes.

Dreaming of steaks, Alex is rudely awakened by Melman and Gloria screaming about Marty’s escape. They pursue Marty to Grand Central Station, where they are surrounded by police along with a handful of other animals who also escaped the zoo (including two very funny monkeys).

After being beaten by a little old lady, Alex is sent into a hallucinogenic state by the drugged darts used to restrain him. A prototypical animal rights activist reporter informs the world that the zoo escape clearly indicates these animals should be returned to their homes in the wild. So, they are crated and sent off in a ship to Africa. Needless to say, four crates break free and Alex, Melman, Gloria, and Marty float ashore at Madagascar. Meanwhile, the penguins commandeer the ship and head off to Antarctica.

In the wild, Alex and his friends quickly realize that they preferred life in the zoo, but, while his friends learn how to eat and forage vegetables in the forest, Alex starves and starts to hallucinate. He begins to see his friends as giant steaks.

In their explorations of the island, the four friends discover a lemur clan. Leading the lemurs is a wacky king who tries to recruit Alex to protect the lemurs from some dingo-like creatures called foosa. When Alex realizes that he’s going native and even tries to bite his best-friend, Alex runs away and imprisons himself inside a fort to protect his friends.

Eventually, the penguins bring the ship back and the friends refuse to leave without Alex. Marty is forced to put his life on the line to rescue Alex, but little do they know that the foosa are after all of them.

Just imagine a movie that urges people to abandon their savage and baser instincts to become civilized, careful, thoughtful, and self-sacrificing. MADAGASCAR is such a movie.

Some moments of this film are hysterically funny. As I was jaded going into the screening, it took some brilliant and very innovative humor to get me to start laughing, but once I did I couldn’t stop.

Although like every good movie, there are references to films that will strike a chord with the audience, there is also a lot of unique, really fresh humor in MADAGASCAR. Furthermore, the characters are extremely well developed. The audience gets to know them, to like them, and to identify with them. Except for a little intentionality in developing the storyline in the beginning, the plot moves very fast.

It’s hard to decide which of the characters are most attractive – the penguins, Alex and his friends, or the monkeys. You could spin off several movies from MADAGASCAR.

The music is also delightful and is well integrated into the plot, helping tell part of the story. The animation itself is fun and often amusing, especially the lemurs.

All that said, MADAGASCAR has some scatological humor, including references to rear ends, some pratfalls and suggestions of violence, and some scary scenes when the wild foosa prepare to attack. One little girl behind us in the press screening did echo our hero’s call for help at one point, so the movie probably skews for ages seven and up.