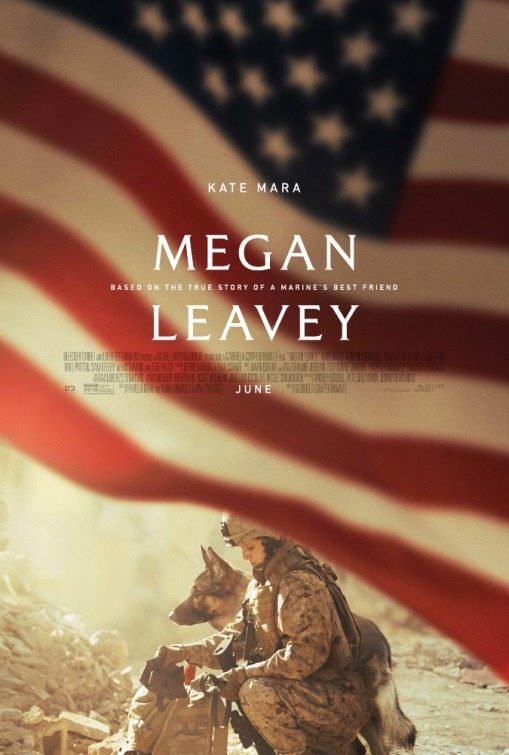 MEAGAN LEAVEY is an engaging war drama. Ever since her best friend died, Megan Leavey’s life has gone off the rails. She can’t keep a job and has no motivation. When she walks past a Marine recruiting office, she joins. After completing boot camp, she’s sent to Camp Pendleton. She gets in trouble and has to clean the cells of the dogs in the K9 division. Seeing the dogs and their trainers, she decides to join the program and does whatever she can to do that. In the end, Megan finds a new best friend.

MEGAN LEAVEY is an entertaining, suspenseful movie with some heartfelt moments. Overall though, the script could have been improved and condensed. The movie seems to linger toward the end and could have been edited more tightly. MEGAN LEAVEY has a strong moral, patriotic worldview. Sacrificing for others brings purpose to Megan’s life. The movie honors the military in a very positive way and truly shows what it was like for American soldiers in Iraq. However, MEAGAN LEAVEY has some gratuitous foul language, violence and mature subject matter.

(BB, PP, C, LLL, V, S, AA, M) Strong moral, patriotic worldview of sacrifice and fighting for those you love, plus there is a church in the background of one scene; 19 obscenities, four GDs and three uses of Jesus’ name as a curse word, plus woman urinates in bushes; bombs go off and a character is hurt, dog bites character in the behind, dog bites into character’s arm, people shoot at each other in war; implied fornication; woman takes a shower, but nothing shown; drunkenness but condemned; no smoking and no drug use; and, villains lie and talk about child bombers in Iraq.

MEAGAN LEAVEY is about a young American woman who has a deadbeat life, until one day she decides to enlist in the Marines, where she bonds with a military combat dog. MEGAN LEAVEY is an entertaining movie with some heartfelt moments and a strong moral, patriotic worldview, but the story drags toward the end and contains some gratuitous foul language.

Ever since her best friend died, Megan Leavey’s life has gone off the rails. She can’t keep a job and has no motivation. When she walks past an office for the Marines, she gets an idea to join. Without telling anyone, Megan joins and is shipped off to boot camp. At first, she questions her decisions, but then ends up enjoying the Marines. After graduating from boot camp, Megan gets sent to Camp Pendleton in California.

Megan gets in a bit of trouble and has to clean the bomb dog’s cells in the K9 division. Seeing the trainers with their dogs, Megan gets very interested in taking on the position of a bomb dog trainer. In this case, the trainers and their dogs go ahead of the soldiers to make sure there are no bombs on the ground so the other soldiers can pass. It’s extremely hard to get this position, but Megan is willing to put out the effort.

Finally, Megan is accepted into the program, but has to take care of the most aggressive dog, Rex. Rex is known for biting through a man’s arm. Megan needs to learn how to bond with Rex, so he will trust her in the field. After weeks of training, Rex and Megan finally bond, and the bond is stronger than any bond Megan has had since her best friend died.

Once in Iraq, Megan meets another dog handler named Matt Morales. Matt is able to give Megan tips while in the field, and the two start spending more time together. One day, Megan and Rex must go out on a big mission, and the question is, will they make it back?

MEGAN LEAVEY is an entertaining movie with some heartfelt moments. Overall though, the script could have been improved and condensed. The movie seems to linger toward the end and could have been edited more tightly. Even so, Kate Mara does a good job playing the title character, Megan Leavey. There is lots of suspense in MEGAN LEAVEY, but also some heartfelt moments.

MEGAN LEAVEY has a strong moral, patriotic worldview, with the lead character learning to sacrifice for others. The movie honors the military in a very positive way and truly shows what happened in the Iraq War. Caution is advised, however, because of some gratuitous foul language and violence.