METALLICA THROUGH THE NEVER 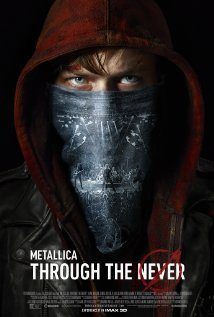 METALLICA THROUGH THE NEVER inserts a bizarre, violent fantasy story around a concert featuring the famous American “thrash metal” band, Metallica. As the band begins a stadium concert, a roadie named Trip is given a gas can. He’s told that a truck delivering an important package for the concert has run out of gas. Trip leaves to get the gas to the truck, but a riot is underway in the city. Eventually, he gets caught between the riot police and the crowd. While trying to protect himself, a masked horseman carrying a giant mallet rides into the riot. Will Trip find the truck? Will he escape the masked hangman?

There’s no denying the power of Metallica’s lead singer’s voice and the technical musical talent of his bandmates, but the music isn’t for everyone. The lyrics run the gamut, from songs with appeals to God, to songs about death and madness to songs about oppression and liberty. There’s only one song about romance. The fictional story is anticlimactic, however. The movie also has some strong foul language and violence. So, extreme caution is advised.

(PaPaPa, RoRo, PCPC, H, C, B, Ab, LL, VV, S, A, DD, MM) Very strong but mixed pagan worldview in concert movie mixed with a fictional action horror story, with some strong Romantic politically correct content, some humanist nihilism in a fascination with death at points, and some Christian, moral content including two or three songs with appeals to God, but that content, otherwise, is weak, and one song lyric seems to say “God is dead”; nine or ten obscenities (mostly “f” words) and one light exclamatory profanity (Good God!), plus some appeals to God, one or two of which may be seen as borderline; strong violence includes rioting in the street at night, man gets caught between riot police and demonstrators, sudden car crash, masked horseman lassos people and hangs them from lampposts, images of corpses hanging from lampposts, horseman tries to run man down, rioters ready to attack man, but he sets himself on fire though he survives somehow, man smashes giant hammer into concrete roof twice and the vibrations are felt throughout the city, including the concert stadium where lights giant speaks crash; no depicted sex, but one or two sexual references; no nudity; alcohol; no smoking, but man takes a pill, and at least one song is about drug addiction, but drug addiction is apparently seen as bad, because drugs take control of your life; and, songs about death, songs about madness, hedonistic attitudes depicted, rioting, rebellion.

METALLICA THROUGH THE NEVER inserts a bizarre, violent fantasy story around a concert featuring the famous American “thrash metal” band, Metallica. There’s no denying the power of Metallica’s lead singer, James Hetfield’s, voice and the technical musical talent of his bandmates, but the music isn’t for everyone, and the ending is anti-climactic.

As the band begins a concert in Toronto, a Metallica roadie named Trip is given a gas can. He’s told that a truck driver delivering an important package for the band has run out of gas.

As Metallica continues to perform its songs, Trip exits the stadium to get the gas to the truck. He discovers that a riot is underway in the city. Suddenly, a car crashes into his car, and he has to start walking. However, he gets caught between the riot police and the crowd. While trying to protect himself, Trip discovers a masked horseman carrying a giant mallet rides into the riot. The horseman lassos some of the people and hangs them on lampposts.

Will Trip find the truck? Will he escape the masked hangman?

METALLICA THROUGH THE NEVER definitely shows what a Metallica concert is like, so fans of the band or the heavy metal genre probably will appreciate the movie. The fictional story, however, has an anticlimactic ending. Eventually, the roadie finds the package, a duffel bag, and looks inside it, but the viewer never gets to see what’s inside. Of course, that’s part of the point – it doesn’t matter what’s inside. The journey is more important. This appears to be an homage to director Alfred Hitchock’s famous theory about the McGuffin, which is the device, object, or goal in a story that the characters want to get or reach. To Hitchcock, it didn’t matter what the thing turned out to be, the search to get it or reach it was more important. However, what this movie forgets is that Hitchcock still showed you what the thing was. Eventually, the events in the fictional story affect what happens in the concert.

During the concert, one song is about obsession, madness, and violence. One song sings about the nightmares a sleeping child endures. Another song talks about the ravages of drug addiction. Some of Metallica’s concert songs are about death. For example, in the movie, the song “Creeping Death” is about God sending the Angel of Death to kill Pharaoh’s first-born son but pass by the houses of the Hebrews. At one point, a large replica of the Statue of Liberty is built and destroyed during a song about oppression, corruption, and injustice. At another point, war images are shown from Communist Dalton Trumbo’s movie of his antiwar book, JOHNNY GOT HIS GUN, while Hetfield sings about the maimed and hospitalized soldier in that story and wonders what happens when it’s his turn to go to war. One of the lyrics implies that democracy is just an excuse to send young men to war but another lyric says, “For democracy, any man would send his only begotten son,” which is eventually followed by, “Oh, please God, wake me” and “Oh, God, please make them hear me.” During another song, crosses rise up from the stage, and there seems to be another reference to God. Despite this, the band seems to sing “God is dead” in one song, though it is hard to determine which song that might be. Only one of the songs, “Nothing Else Matters,” is about the usual pop music subject, romantic love, and it’s probably the most melodic song during the concert. Of course, it’s not always easy to hear or decipher Metallica’s lyrics while the crowd is screaming, the guitars are blazing, the drums are pounding, and Hetfield is working his vocal chords.

Ultimately, however, the sentiment in the movie is the kind of mixed Romantic paganism that seems to have infected American culture. Christian, biblical values are not absent from the movie’s worldview, or even from Metallica’s lyrics, but they are muted. Thus, salvation and man’s relationship with God, much less Jesus, aren’t the main focus. Consequently, people are left adrift, their lives have become fragmented in a nightmarish way, and leftist ideology sometimes becomes the new religion. Along with that comes some strong foul language.