"Mentor to the Mighty" 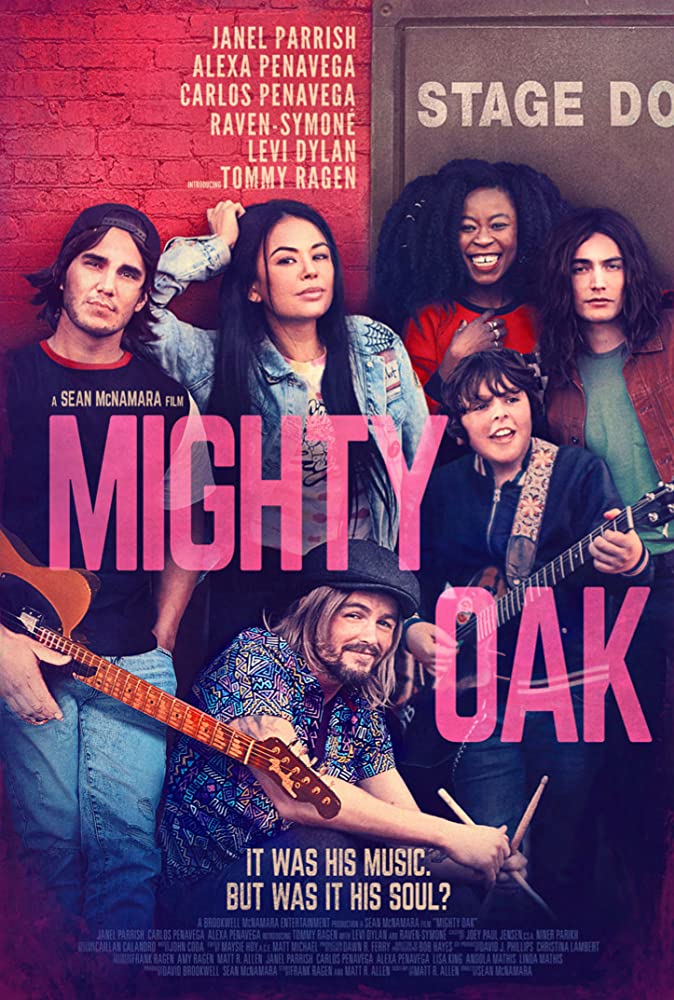 MIGHTY OAK is a sometimes endearing, sometimes confusing drama about Gina, a former band manager still mourning the loss of her brother 10 years after his tragic death. One day, Gina meets Oak, a talented 10-year old boy with guitar-playing skills. Gina gets the band back together with Oak front and center, but she has her own warped reasons for doing so. Eventually, however, she learns to truly care for Oak and move from her past.

MIGHTY OAK has a good cast with some notable veterans. MIGHTY OAK almost functions like an indie movie rather than a studio release. If there were less foul language and mature content, MIGHTY OAK could’ve been a movie for the family, but, alas, it isn’t. The movie has a strong moral worldview with some Christian elements and some negative content. The characters take care of one another, and there’s a prayer scene. However, the lead female character is fascinated by the idea of reincarnation, although she eventually drops the idea. MIGHTY OAK also contains gratuitous foul language and some drug references. So, MOVIEGUIDE® advises extreme caution.

(BB, CC, Pa, FR, LL, V, S, AA, DD, MM):
Dominant Worldview and Other Worldview Content/Elements:
Strong moral worldview with some Christian elements includes characters take care of one another in various seasons of life, woman mourns her late brother, prayer is shown before a band plays for a live audience, but they don’t pray in Jesus’s name, a church is shown, and there’s a Catholic painting of the Virgin Mary, mixed with a few New Age pagan, false religion elements where one character is obsessed by the idea of reincarnation and makes a comment about the universe sending her a sign that her late brother lives in someone else, but she eventually abandons the notion
Foul Language:
17 obscenities, four light profanities and two obscene gestures
Violence:
Guns shown in a painting, car accident shown where a van flips, and characters appear injured with a bit of blood depicted, and there’s a joke about killing someone,
Sex:
Unmarried couple almost fornicates, but the guy stops it, couple kisses two other times, and a mention of “getting laid”
Nudity:
No nudity
Alcohol Use:
Social alcohol use, beer shown in a painting, comments about being/getting drunk
Smoking and/or Drug Use and Abuse:
No smoking, but a drug addict has various medications on her bedside table, addict travels across the border to get drugs, gets arrested and eventually dies of an overdose, and a character talks about being on anti-depressants after the tragic death of her brother; and,
Miscellaneous Immorality:
Bullying, name-calling, comment poking fun at eating disorders, brief depiction of gambling.

MIGHTY OAK is a sometimes endearing, sometimes confusing drama about a former band manager named Gina Jackson who mourns the loss of her brother 10 years after his tragic death. MIGHTY OAK has a mixed worldview with some elements of morality but includes one character who’s fascinated by the idea of reincarnation, gratuitous foul language and some drug content, so MOVIEGUDE® advises extreme caution.

MIGHTY OAK begins with a flashback. A popular band, Army of Love, preps to take the stage at a concert. Cut to the drive to the next gig location. Gina Jackson, the Army of Love’s manager, relays that she got them a major concert right before the van flips, and Vaughn, the leader singer and Gina’s brother, dies to the accident.

Cut to 10 years later in San Diego, Calif. Members of the band live their lives but stay in touch. It seems that everyone has transitioned except for Gina, who turns to gambling to fill the void Vaughn left. There’s an odd silver lining in Gina’s life when she finds out that a friend of hers gave away Vaughn’s $3,000 guitar to a child named Oak. Oak has skills on the guitar. With a little grooming from Army of Love alum Pedro, Oak could really be something special.

There’s only one problem, however. Oak’s mother is a drug addict and adamant that Oak get compensation for playing in the revamped Army of Love. Gina takes back her former status as the band’s manager and convinces Oak’s mother that he will be sheltered, compensated and respected. However, Gina has her own reasons for adding Oak to Army of Love. She thinks it’s possible Oak could be her brother reincarnated.

When Pedro and the other band members unearth Gina’s motivations, they shake their heads and encourage her to stop being attached to her late brother. Meanwhile, Oak’s mother overdoes on drugs and dies, leaving Oak an orphan. The future of Army of Love is at stake but so is the health of all the characters. How will things play out (pun intended)?

MIGHTY OAK has a good cast with some notable veterans like Carlos and Alexa PenaVega (Hallmark), Janel Parrish (PRETTY LITTLE LIARS) and Raven Symone (THE VIEW, THAT SO RAVEN). However, MIGHTY OAK almost functions like an indie movie rather than a studio release. Sometimes it feels like the dialogue is distant, but the transition music is well-done. If there were less foul language and mature content, MIGHTY OAK could’ve been a movie for the whole family, but alas, it isn’t.

That said, MIGHTY OAK has a strong moral worldview with some Christian elements, but mixed with some very negative content. Characters take care of one another whether they’re up or down in life. Also, a band prays before playing before a live audience, a church is shown, and there’s a Catholic painting of the Virgin Mary, However, the lead female character is fascinated by the idea of reincarnation, although she eventually drops the idea. The movie also contains gratuitous foul language and some drug references. So, MOVIEGUIDE® advises extreme caution for MIGHTY OAK.