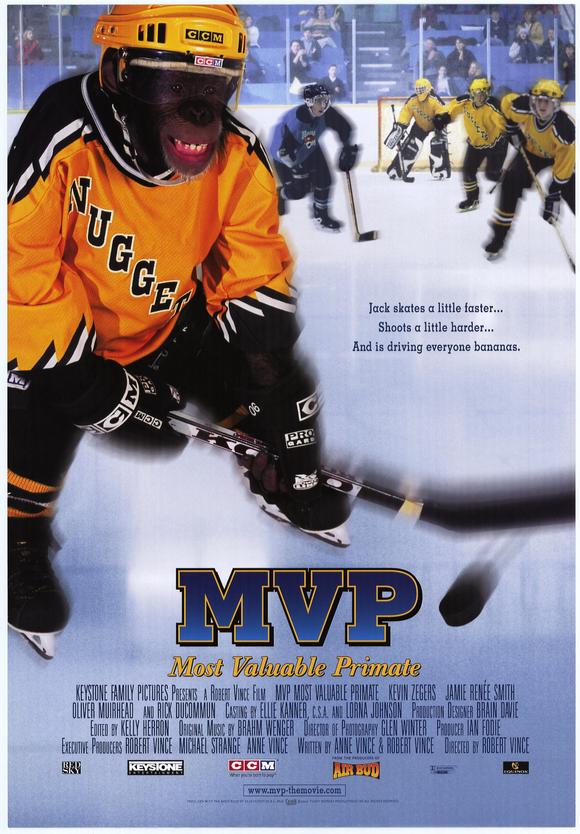 The makers of AIR BUD return to the big screen with a winsome children’s film, MVP: MOST VALUABLE PRIMATE. Instead of a basketball-playing dog, the movie features a hockey-playing chimp named Jack. Slated for the research lab, this intelligent ape finds its way to Canada, where it inspires a local hockey team with its antics. The hockey team is led by a transplanted Californian named Steven, played by Kevin Zegers of the popular AIR BUD movies.

If the plot seems familiar, it is because it’s made by the same folks who made the AIR BUD movies, but, in spite of its familiarity, some silly over the top moments and a lot of monkeying around, MVP is a very winsome movie. Just when some silly antic is about to illicit a groan from the audience, the movie wins back the viewer's hearts. In the tradition of GORDY, BABE, AIR BUD, and other animal comedies, MVP stands out as very likeable and cute, with only a couple very minor flaws. Those include sometimes making animals seem more human than they really are and a subtle case against animal research, points that parents should discuss with their children

(BBB, C, V, M) Strong moral worldview with one reference to having faith & an implicit anthropomorphic view toward animals; no foul language; mild hockey violence including pushing, shoving against the boards, being hit by a puck, but very low key & mostly slapstick; no sex; no nudity except for chimpanzee; and, genius chimpanzee & very subtle case against animal research, which actually saves millions of human lives.

The makers of AIR BUD return to the big screen with a winsome children’s film, MVP: MOST VALUABLE PRIMATE. Now instead of a basketball-playing dog, the movie features a hockey-playing chimp.

The movie opens with an archetypal morning bedroom scene. This time, however, as the alarm rings, a hairy hand turns off the alarm clock. The covers go back to reveal a chimp, who proceeds to take a shower and brush his teeth. Next, he prepares coffee and breakfast, and finally heads out with two cups of coffee to the stage, where he sits down next to Dr. Kendall in front of an auditorium of students who are studying primate behavior. Clearly, this chimp is no chump, but as Dr. Kendall points out, he is Jack, a real genius with a wry sense of humor.

Dr. Kendall decides to give Jack a vacation at the wildlife park where he was born. However, when Dr. Kendall dies that very night, the Dean at the university, Dr. Peabody, decides to make some money by selling Jack to a hepatitis research laboratory.

Overhearing this diabolical plan, Jack’s keeper takes pity on Jack and puts him on a train to go back to the wildlife park. Regrettably, Jack sleeps through his stop and ends up at the end of the line in the frozen town of Nelson, Canada. There he meets deaf but not dumb Tara West and her hockey-playing brother Steven, who have just moved to Nelson. Steven has just joined the B-hockey team, made up of losers who couldn’t make it into the A-league. These losers consist of: a goalie who cannot see; the best player who feigns sickness so he doesn’t have to play; another player who prefers knitting; and, an assortment of oddballs who only seem to be found in these types of movies.

Steven is a gung-ho player, and, although he’s from California, he is very good. After getting his share of knocks on the ice, he inspires the team.

The team is even more inspired when Jack joins them on the ice. Jack can skate rings around everyone and has a wicked slapshot.

Naturally, the team goes from being in the B-league to the A-league, and makes it into the playoffs. At which time, Dr. Peabody locates Jack and comes to take him back to captivity.

If the plot seems familiar, it is, but, in spite of its familiarity, some silly over the top moments and a lot of monkeying around, MVP is a very winsome movie. Just when some silly antic is about to illicit a groan from the audience, the movie wins back the viewers hearts.

In the tradition of GORDY, BABE, AIR BUD, and other animal comedies, MVP stands out as very likeable and cute. There are two flaws. First, it anthropomorphizes Jack to such a degree that children should be cautioned that monkeys are not just little people with hair all over them. God created each species as their own kind. However, the good news is that the movie refrains from any evolutionary double speak. Secondly, the movie does make a very subtle case against animal research, again a point that should be clarified with children. These flaws are very minor, however.

The movie is full of good moral principles and good fun. If it doesn’t make you laugh and cry, you’re not a child at heart. Children of all ages will love MVP: MOST VALUABLE PRIMATE.