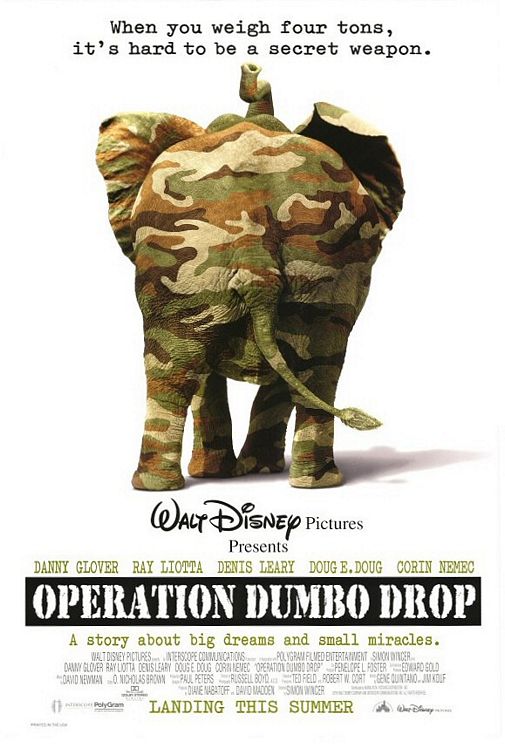 OPERATION DUMBO DROP is based on the true story of five Green Beret's in 1968 Vietnam. When their village base looses their prize elephant, the Green Beret's have to find and deliver another one, all in time for an important village ceremonial ritual where a king must ride atop an elephant. The story is a heart-warming tale of persistence and achieving a goal, without much offensive content.

(B, O, L, V, M) Moral worldview, with some minor elements of superstition, but are mostly looked at in a comical manner; 4 minor obscenities, 3 profanities & scatological humor; and, brief violence -- some shooting & fist-fighting.

OPERATION DUMBO DROP is based on the true story of five Green Beret’s in 1968 Vietnam. The village of Dak Nhe has been helping the Americans with the whereabouts of the Ho Chi Minh Trail, when the Viet Cong come and kill their prized pachyderm. The villagers need an elephant by the next Friday for their ceremonial ritual where a king rides in on an elephant. If there’s no elephant, then the king will not visit the village. The Green Beret’s realize they have to help the village and promise to bring them an elephant. Many funny moments mount as the men move the elephant toward the village with many unique modes of transportation.

OPERATION DUMBO DROP is an entertaining film, that will touch the hearts of the young and old alike. The acting is well done by all, including the elephant. There are some references to superstition, but it is always treated lightly with humor. Foul language and violence too, are kept at a bare minimum. It is a pleasure to see a positive part of the Vietnam War, where usually the negative side is only seen. The movie starts with every character holding a different motive, but ends with everyone caring about what happens to the others. Thus, the story shows what can happen when people stop thinking of themselves and start thinking of others.