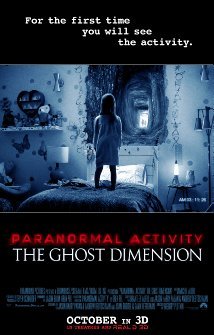 PARANORMAL ACTIVITY: THE GHOST DIMENSION is another depressing entry in an increasingly annoying franchise. It opens in 1988 in Santa Rosa, Calif., where a man tells two little girls they will become friends with “Toby.” Cut to Nov. 29, 2013 in Santa Rosa, where a married Christian couple, Ryan and Emily, and their young daughter, Leila (“Leela”), recently moved. Ryan’s brother, Mike, finds a box filed with a strange camera and tapes from 1988. Ryan starts filming inside the house. As he does so, something seems to invade their house. Meanwhile, Leila starts mentioning her allegedly imaginary friend, Toby. Of course, it turns out Toby is actually an evil demon. GHOST DIMENSION certainly has its share of scares, but the plot breaks down midway through the movie. It makes the demonic world too powerful. So, when the priest and the mother finally rely on their Christian faith in God and Jesus, the demon is able to counteract them too easily. The movie also has lots of strong foul language. PARANORMAL ACTIVITY: THE GHOST DIMENSION is a silly, nonsensical, unbelievable, abhorrent horror movie

(OOO, C, B, LLL, VVV, S, A, MMM) Very strong occult, demonic worldview with witchcraft and demonic symbols where Christian efforts to stop the demonic forces and their witchcraft supporters (including invocations of the Name of Jesus) are ultimately and totally ineffectual; at least 45 obscenities (mostly “f” words), two strong profanities mentioning Jesus, and 11 light profanities, plus woman vomits something acidic out of her mouth; very strong scary violence includes man impaled through chest, necks snapped, demon attacks people and scares them by rushing at them somehow, but he’s not in a physical form, man’s face apparently burned with acid, scary images of something invisible or supernatural taking up residence in various rooms of a house, hypnotized little girl tries to burn Bible and rosary in fireplace before mother stops her, a demonic tunnel opens up in one wall of a house where little girl has been put into a trance to draw demonic/occult symbols, little girl suddenly bites priest trying to minister to her, little girl scratches at wall where demonic portal is, and her hands get bloody, priest dragged off, etc.; wife solicits husband to come to bed, with her but nothing shown; no nudity; brief alcohol use; no smoking or drugs but a verbal reference to hallucinogenic “mushrooms”; and, priest is called but he’s ultimately ineffectual, secret cabal of witches want to conjure a demon physically, kidnapping of children is successful, occult and demonic deceit against a Christian family is successful.

PARANORMAL ACTIVITY: THE GHOST DIMENSION commits the huge theological mistake of making an evil demon and its witch cabal of supporters more powerful than the Christian family they are stalking and the priest who comes to help the family. It’s evil to make demonic forces more powerful than they truly are. It’s also evil to make their power and their existence look negligible or non-existent. The obscenity-laced GHOST DIMENSION is also a rather silly example of false advertising because there really are no ghosts whatsoever in this movie. Shot in the found-footage style, the movie opens in 1988 in Santa Rosa, Calif., where a witch magically snaps the neck of a wounded young man crawling on the floor. She goes upstairs with the two daughters of the house, Katie and Kristi, where she introduces them to a man who will train them to become friends with and “serve” someone named “Toby.” Cut to Nov. 29, 2013 in Santa Rosa, where a married Christian couple, Ryan and Emily, and their young daughter, Leila (“Leela”), recent moved. Ryan’s brother, Mike, shows up for a visit and says he’s going to visit there two weeks instead of just a few days. Emily is perturbed, but she rolls with the news. A few brief scenes later, Mike finds a strange box filed with a strange camera and a bunch of tapes from 1988. Ryan starts playing with the camera and shooting inside the house. As he does so, he sometimes sees a murky outline and small pieces of debris floating in the viewfinder. Meanwhile, Leila starts mentioning her allegedly imaginary friend, Toby. Of course, it turns out that Toby is actually a demon, who wants Leila and her family to help him gain a physical body. Ryan and Emily try to enlist the help of a priest, Father Todd. As he tries to help, “Toby” seems to become more and more powerful, and Leila’s behavior more and more bizarre and threatening. GHOST DIMENSION certainly has its share of scares, but the plot breaks down midway through the movie, even when the scares become more numerous after a slow beginning. Also, when things start getting really intense, the filmmakers make sure there’s always someone there to hold the haunted camera. At some point, wouldn’t you put the camera down??!!!?? Aside from that, PARANORMAL ACTIVITY: THE GHOST DIMENSION is also theologically impaired. It makes the demonic world too powerful. When the priest or the mother rely on their Christian faith in God and Jesus, the demon is able to counteract them too easily. This abhorrent flaw makes the movie even less credible, as well as more aggravating and more deplorable. Ultimately, as in previous PARANORMAL ACTIVITY movies, the demon and the witches win, even though the best horror movies usually give the protagonist or good guys at least some kind of victory (see HORROR OF DRACULA with Peter Cushing and Christopher Lee or THE DEVIL’S BRIDE where Christopher plays a Christian who foils a satanic plot by a Satanist/warlock). PARANORMAL ACTIVITY: THE GHOST DIMENSION also has an excessive amount of foul language, including many “f” words. There is some brief innuendo in a couple scenes as well. Despite the title, there are no real ghosts in the movie. GHOST DIMENSION is a silly, nonsensical, unbelievable, abhorrent horror movie.