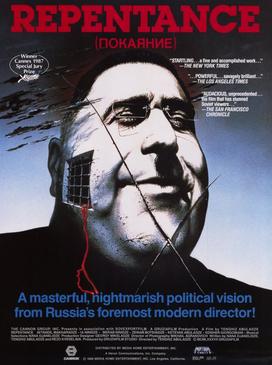 REPENTANCE is a 1984 Russian movie made in the Georgian province of the old Soviet Union. In the story, the mayor of a small Georgian town dies and is buried. A day later, his corpse turns up and is secretly reburied. The corpse keeps returning. Eventually, the police capture a local woman. They accuse her of digging up the body. She says the mayor should not be buried, because his reign of terror led to the disappearance of many friends. She says the town must repent of the former mayor and his policies, not bury him.

This magnificent, subtitled movie exposes the evils of communism, socialism and totalitarianism while exalting the suffering and triumphant Church of Christ Jesus. A very philosophical movie, it functions as a general study in tyranny and victimization, beautifully filmed and masterly acted. REPENTANCE is an allegory about Russia under Stalin. God is central to the movie’s plot. It shows that the Devil or petty Marxist tyrants can’t defeat God’s people. According to many experts, REPENTANCE helped end communist tyranny in Russia and Eastern Europe in the 1990s.

(CCC, BBB, ACACAC, V, A, D):
Dominant Worldview and Other Worldview Content/Elements:
A scathing, allegorical Christian expose and indictment of the evils of communism
Foul Language:
No foul language
Violence:
Some violence
Sex:
No sex
Nudity:
Shadow female nudity
Violence:
some violence
Alcohol Use:
Some alcohol use
Smoking and/or Drug Use and Abuse:
Some smoking but no drugs; and,
Miscellaneous Immorality:
Nothing else objectionable.

REPENTANCE, a 1984 Russian movie made in the Georgian province of the old Soviet Union, was banned for several years in its homeland because it exposes the evils of communism, statism and totalitarianism while lifting up the suffering and the triumphant, eternal Church of Christ Jesus. REPENTANCE is credited with bringing down the Soviet Union, along with President Ronald Reagan, Prime Minister Margaret Thatcher, and Pope John Paul II.

REPENTANCE tells an allegory about the Soviet Union under Joseph Stalin. It focuses on the story of Varlam, the communist mayor of a small town who tries to destroy all individuality and Christianity, but ends up destroying himself and his family. Christians should see and support REPENTANCE.

The movie opens with Keti baking cakes in the shape of churches. Then, it cuts to Mayor Varlam’s funeral. After his burial, someone exhumes his body to everyone’s horror. This grisly activity continues until we discover that Keti has been exhuming him because he persecuted unto death both her father, Sandor, an artist who loved Jesus, and her beautiful mother, Nina. Sandor is a Christ figure, who suffers with quiet strength the avaricious machinations of the state.

Varlam, who looks like a combination of Hitler, Stalin and Mussolini, is proud of himself. He’s full of banal wit and pretends to deal with every situation with aplomb. He is the devil incarnate, as we see when his son confesses to a priest only to find that the priest is Varlam the Devil.

In the end, Varlam’s grandson takes his own life because of the atrocious sins of his father and his grandfather. The boy’s father repents, exhumes Varlam and throws him off a cliff. Likewise, REPENTANCE calls the people of the world to repent of the sin of communism by renouncing it, turning away from it, exorcising it, and throwing it into the dustbin of history.

God is the center of this movie. The Spirit He gives us cannot be defeated by the Devil, or petty Marxist tyrants. The dialogue in a critical scene in this heartrending movie captures its essence:

Old Woman: “Does this road lead to a church?”

Keti: “This is Varlam street. It will not take you to a church.”

Old Woman: “What good is a road, if it doesn’t lead to a church?”

REPENTANCE is a powerful, beautiful movie. There are moments of great suspense and moments of laughter. MOVIEGUIDE recommends REPENTANCE very highly, but with caution. There is a brief scene of shadow nudity; an unfortunate blemish in one of the most Christian films to come along in years.

Also, some parts of REPENTANCE may fail for some Americans because it has references that only Russians will understand, but it is well worth seeing, even with these obscure moments. For others, REPENTANCE may require work and persistence, but if you apply the effort to get into it, it is very, very rewarding.

If you have friends who are drifting into humanism, socialism, communism, or any other statist evil, convince them to see REPENTANCE so they can understand that the truth is to be found in Jesus Christ, not in the state.

2. What is the premise of REPENTANCE? Do you agree with it?

6. Why can’t the people just bury communism and forget it? Why must they repent?

7. Why does the Varlam’s son throw him off the cliff? Cite Scripture.

8. How is God shown to be triumphant in this film?

10. How does REPENTANCE show that the truth is only found in Jesus Christ?