"Overcoming Fears for Your Family" 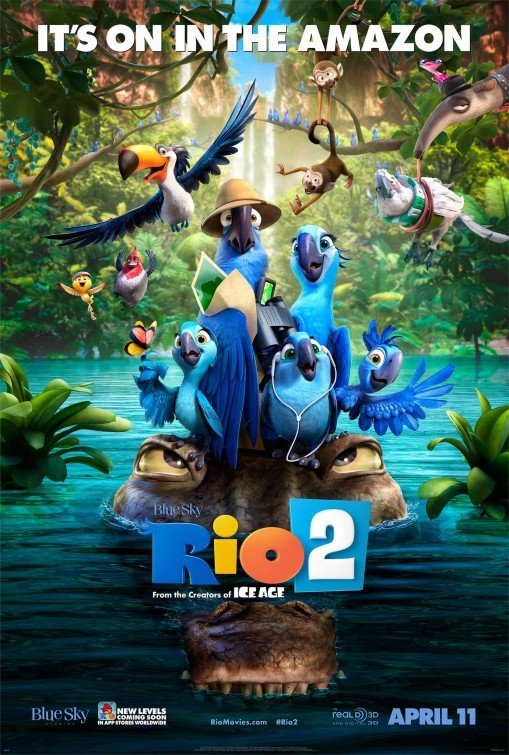 RIO 2 is the sequel to the 2011 animated hit about a rare Blue Macaw bird named Blu who moves from Minnesota to the very different Rio de Janeiro to save his species from extinction. In the sequel, Blu, and the only other Blue Macaw, Jewel, live with their three children in a bird sanctuary in Rio. When they find out there are other birds in the Amazon just like them, they decide to take the family on a trip to the Amazon to revisit their roots. However, Blu is highly domesticated and isn’t accustomed to the wild. They come across an illegal logger who wants to destroy the forest. It’s a wild ride with adventure, music and some danger.

RIO 2 is a very entertaining movie that all ages will enjoy. The story has all the right elements to be a road-trip/meet-the-in-laws movie with plenty of clever, clean jokes. The animation is beautifull. There are also many strong, positive moral themes regarding family, sacrifice, courage, humility, and selflessness. RIO 2 has some light environmentalist elements, however, so minor caution is warranted.

(BB, C, E, O, V) Strong moral worldview with some light Christian, redemptive elements stressing family, selflessness, sacrifice, humility, and courage, some powerful shots of the Christ the Redeemer statue in Rio, and a woman says “thank heavens,” with a light environmental message regarding the villainous illegal loggers and the “tree huggers” who just want to protect the environment and an occult moment where one superstitious bird says she read something in her “droppings”; no foul language but a few light scatological jokes; some light animated violence that could seem a little dark, some wild animals get killed in non-dramatic ways, and the climax ends in a battle where hundreds of birds attack some humans and drive them out of the jungle, and one villainous bird tries to poison another bird, but fails; no sexual content; no nudity; no drug use; no smoking; and, nothing else objectionable.

RIO 2 is the sequel to the 2011 animated hit about a rare Blue Macaw bird named Blu from Minnesota who moves to the very different Rio de Janeiro in order to save his species from extinction.

In the sequel, Blue and the only other Macaw, Jewel (voiced by Anne Hathaway), and their three children live in a bird sanctuary in Rio run by Blu’s owner Linda and her new ornithologist husband, Tulio. Linda and Tulio uncover a forest where they believe more Blue Macaw live. This new discovery gives Jewel the idea to take the whole family to the jungle to rediscover their roots. Blu, who was raised highly domesticated isn’t crazy about leaving the sanctuary, but he agrees to do it when his buddies tell him “happy wife means happy life.”

As the family travels to the Amazon, Nigel, the nefarious bird who tried to kidnap them in the previous movie but was injured in the process, discovers their plan and sets out to take revenge on Blu. Nigel is accompanied by a poisonous frog who’s in love with Nigel and will do anything for him and an Anteater.

When Blu and his family arrive at the heart of the Amazon, they are greeted by a multitude of Macaws. They turn out to be Jewel’s long lost family who she thought was dead. The reunion is sweet for Jewel and the children, but Blu has a hard time adjusting to their way of life. Feeling inadequate to do how they do things, Blu wants to find Linda who’s somewhere else in the jungle. What Blu and the other Macaws don’t know is that an evil illegal logger has captured Linda and Tulio and threatens to destroy the jungle where all the Macaws live. Will Blu save the forest and his family?

RIO 2 is a very entertaining movie that all ages will enjoy with more fun musical numbers, hilarious characters, and a moving story about family. The story has all the right elements to be a road-trip/meet-the-in-laws movie with plenty of clever and clean jokes. Blu and Jewel are an endearing bird couple, and Nigel is a hilarious villain. The animation is beautifully rendered. Families will love soaring through the jungles and cities of Brazil in this well-animated movie.

RIO 2 has some strong moral themes regarding family, sacrifice, courage, humility, and selflessness. Blu starts off a little selfish, not wanting to move to the jungle for his own personal reasons, but he learns he must overcome his fears and put his family’s needs above his own. Along with the moral themes are some powerful shots of the Christ the Redeemer statue in Rio. Though the main villain is a man who’s illegally logging, this isn’t so much of an attack on the logging industry which is very beneficial to society, but against those who are doing it illegally in Brazil. By either cutting down trees that belong to others, or obtaining land through corrupt means, illegal loggers cheat, threaten, blackmail, and manipulate. There is an environmental message in that the villain continuously calls Linda and Tulio “tree huggers.” Otherwise, RIO 2 is a fun movie requiring light caution.