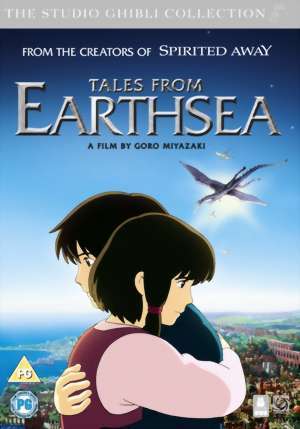 TALES FROM EARTHSEA is a feature-length animated fantasy movie from Japan dubbed into English by Disney. It is based loosely on a series of novels by acclaimed science fiction and fantasy writer Ursula LeGuin. A wizard and a teenage prince with a magical sword meet up with the wizard’s female friend and her adopted daughter. An evil wizard searching for immortality kidnaps everyone but the girl. The girl must bring the magic sword back to the prince in order to stop the evil wizard and restore the “balance” to the world that the evil wizard disrupted.

TALES FROM EARTHSEA is almost a four-star movie, though fans of the original novels probably will be upset by the movie’s changes to the original stories. The beginning is a little slow and mysterious, but this colorful movie picks up when the prince runs into some slave traders led by the evil wizard’s henchman. The story, characters and animation in TALES FROM EARTHSEA are compelling, especially the good wizard’s mixture of gentle kindness and strength. The story has strong fighting violence, scary moments and a vague mixed worldview with magic. So, caution is advised, especially for pre-teen children.

(PaPa, E, OO, C, B, FR, VV, AA, M) Strong, slightly mixed pagan worldview with vague environmentalist notions about the “balance” of nature in a fantasy world on another planet where magic and occult sorcery works, minimized by some redemptive, allegorical, symbolic references to light indicating that light is the source of good power as well as redemptive references to forgiveness and some moral elements such as finally deciding to accept the consequences of bad decisions and defeating an evil sorcerer seeking immortality and willing to kill and enslave people to get it, plus a reference to the “cycle” of life and death but in the sense that death is a part of life and a statement about having only one life to live (but this may only be in the English language version because the original novels apparently support the theory of reincarnation), but also some apparent dualistic notions are expressed but not fully explained and there is no reference to God by the protagonists, though one minor character mentions “gods”; no foul language; some strong action cartoon violence such as fighting, man’s arm cut off, dragon bites another dragon and blood flows, scary villains, main villain tries to strangle girl, much of tower crumbles with people on top of it, people hang on top of crumbling tower for dear life, prince stabs father (the king) and steals magical sword; no sex; no nudity; alcohol use and drunkenness in a villain; no smoking; and, stealing, kidnapping and slavery but much of it is rebuked in some way.

TALES FROM EARTHSEA is a feature-length animated fantasy movie from Japan dubbed into English by Disney Studios. Based loosely on a series of novels by acclaimed science fiction and fantasy writer Ursula LeGuin, the story comes across as very compelling, but it has a fascination with magic and sorcery that many modern fantasy stories have.

The story opens with Prince Arren stabbing his father, the King, and taking his sword, which apparently has magical powers. Arren meets up with Sparrowhawk, the wandering “archmage” of Earthsea who is trying to restore balance to the world. Somehow, the balance of nature has been upset, which is causing crops to die, magic to weaken and dragons to return.

After several adventures, Arren and Sparrowhawk cross paths with Sparrowhawk’s female friend Tenar and her adopted daughter, Therru. Sparrowhawk finds out that the balance has been disrupted by an evil wizard named Cob whom Sparrowhawk once knew. Cob is searching for immortality and is breaking the separation between life and death.

Cob kidnaps Arren, Sparrowhawk and Tenar to get the magical sword, which Arren has misplaced. It’s up to Therru to go to Cob’s castle, return the sword to Arren, and help Arren stop Cob’s search for immortality and free Tenar and Sparrowhawk.

TALES FROM EARTHSEA is almost a four-star movie, though fans of the original novels probably will be upset by the movie’s changes to the original stories (the movie’s basic plot is taken loosely from the third and fourth books in a series of five novels). The beginning is a bit slow and mysterious, because it doesn’t reveal the details of Sparrowhawk’s quest until about halfway through the story. Interest is achieved, however, by piquing the viewer’s desire to see where the story is leading. An exciting interlude with some slave traders, who turn out to be led by Cob’s henchman, helps. The characters are also interesting, especially Sparrowhawk’s mixture of gentle kindness and strength, which comes through very strongly in Timothy Dalton’s excellent voice work in this dubbed version.

Of course, the story’s pagan mixture of magic, sorcery, balance, and issues of life and death never quite comes together or makes much sense overall. It is just specific enough to intrigue but vague enough not to offend too deeply, like some of the STAR WARS movies. For instance, at one point there is talk about the “cycle of life and death,” which could intimate reincarnation, but there is also a line of dialogue that the people in this fantasy world have only one life to live. Also, at one point it is said that dragons and humans were part of one race but that they decided to become their own separate races sometime in the distant past.

The problem with a fantasy movie based on a series of books like TALES FROM EARTHSEA is that it can only suggest the philosophies and worldview of the original author. To delve more deeply into that world and discover what the author really says and means, one has to read the books. This movie only suggests some of the original author’s themes in her earlier EARTHSEA books – the more recent EARTHSEA books have more of a feminist outlook.

All in all, however, the story, characters and colorful animation in TALES FROM EARTHSEA are compelling, despite some strong fighting violence, scary moments and a vague mixed worldview with magic in it. Caution is advised for viewers, especially pre-teen children.