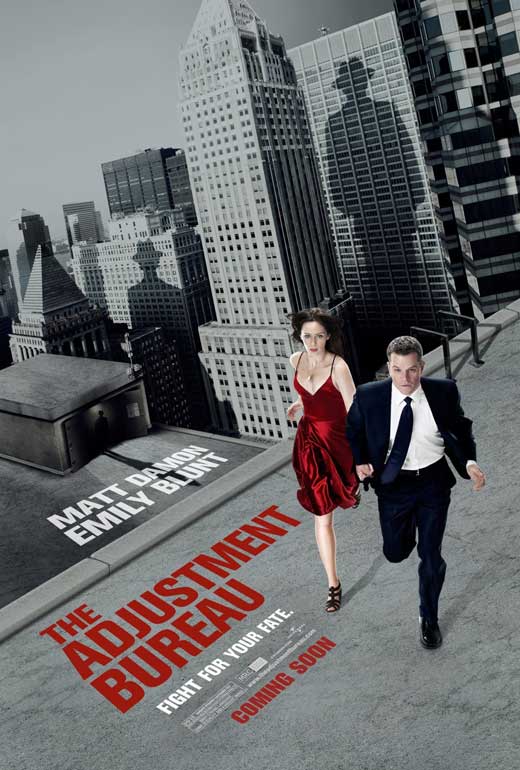 THE ADJUSTMENT BUREAU stars Matt Damon as David Norris, an idealistic young politician who fails to win a seat in the U.S. Senate. On election night, David meets Elise, a talented ballet dancer. They feel an instant connection, but Elise is chased away by mysterious men in hats. David runs into Elise twice more and establishes an even deeper love connection. Then, David stumbles across the mystery men, who forcibly take David aside. They explain to him they work for “The Chairman” – an obvious reference to God. They say God’s plan is supposed to prevent David and Elise from falling in love. David decides to keep fighting back, no matter the cost.

THE ADJUSTMENT BUREAU is very suspenseful. It also offers deeper food for thought. For example, the movie discusses free will and predestination in ways that may please and inspire people on many sides of the issue. It mostly avoids questions about God’s identity, His moral will and Christian salvation, however. There is also some strong foul language, a bedroom scene and a couple false pieces of dialogue. Strong caution is therefore advised.

(BB, C, Ro, FR, RH, LL, V, S, N, A, D, M) General theistic, moral, slightly redemptive worldview with some Romantic elements, as the movie’s central premise focuses on whether the lead characters – and humanity by extension – truly have free will, or whether our lives are completely controlled by God, who gives us only an illusion of free will (movie gives a both/and answer, though it’s left open enough that viewers of any persuasion can decide for themselves the answer, but there is one slightly ambiguous, theologically false “Joan of Arcadia” comment toward the end about God appearing in different, personal ways to individuals that can lead people away from Jesus Christ, but the movie does not really discuss what does or does not lead to salvation or redemption and a piece of dialogue gives a left-oriented, revisionist view of human history; about a dozen obscenities and several strong and light profanities; light violence is limited to exciting but not graphic car and foot chases in which a few auto crashes occur, including a man is hit hard by a taxi yet manages to walk away unscathed, random passersby are pushed aside during foot chases, and the antagonists threaten the protagonist; unmarried couples kisses in bed, which leads to implied fornication; upper male nudity from male lead; a few moments of casual drinking in social settings like restaurants and bars, plus newspaper articles about lead character’s past drunken escapades; no smoking or drugs; and, lead male character tries deception and theft to stay ahead of the mysterious agents who claim they are working for God who wants them to keep him from falling in love with lead female character.

THE ADJUSTMENT BUREAU is one of the most original films to come out in years, a refreshing change of pace from typical Hollywood cookie-cutter fare. It stars Matt Damon as David Norris, an idealistic young congressman who in the opening minutes is scrambling to win a seat in the U.S. Senate, only to surprisingly lose on election night.

That night, David meets Elise, a supremely talented ballet dancer with whom he feels an instant love connection, but who is chased away from him by mysterious men in hats. David runs into Elise again a while later and develops an even stronger connection, only to again be separated from her in mysterious fashion.

This time, though, David stumbles across the mystery men – revealed to be angels – as they are erasing the memories of his colleagues in his law firm. The men explain to him they work for “The Chairman” – an obvious reference to God – and help keep certain important people’s lives running according to a strictly written plan. The Chairman’s plan is supposed to prevent David and Elise from falling in love, because each is meant to have a separate profound impact on the world.

David is haunted by his knowledge and for years can’t move on to other relationships. When he sees Elise on the street five years later, he risks everything to tell her about the angels and the Chairman. Eventually, the two decide to fight against all odds to preserve their love and break the hold God’s plan has on their lives. Will their true love convince the Chairman to alter His plan?

Based on a short story by the late, imaginative writer Philip K. Dick, THE ADJUSTMENT BUREAU offers surprising food for thought for viewers, but especially faith-filled ones. In fact, Universal Pictures has a specific marketing outreach designed to win believers over to seeing it. Issues of free will and predestination abound, but are relayed in an easily digestible fashion, while the alternate-universe New York City that the angels chase the lead couple through is composed of astonishing special effects and never-ending inventiveness.

The movie offers arguments both for and against free will versus predestination that the movie seems to be saying at times BOTH/AND, in a way that seems to support a compatibilist view of Free Will and Destiny. In a compatibilist view, free will is defined in such a way that allows it to co-exist with ideas of predestination, including God’s Absolute Sovereignty. Needless to say, this is a heavy topic that philosophers and theologians have been debating in various ways for centuries.

In discussing these topics, the movie avoids discussing the differences between a Christian worldview of God versus a Non-Christian worldview. Thus, many issues such as the identity of God, God’s Moral Law, the Bible, and the need for salvation or redemption are not mentioned. This neglect may bother some viewers more than others.

Regrettably, however, the movie does include a line of dialogue that gives a JOAN OF ARCADIA spin to the concept of God. In contrast to this, the orthodox, biblical view is that every epiphany or appearance of God is Jesus Christ, although God acts in and through people, and we become His hands, feet and voice as His church. When he appears in the flesh, however, He is always Jesus Christ. Instead of this, the movie suggests God can appear to people in other, less obvious, less specifically Christian ways. The movie also doesn’t deal with many questions of morality, such as what God asks of us ethically.

All in all, however, THE ADJUSTMENT BUREAU is a suspenseful, thought-provoking movie that does say there is a God who has a plan for human beings. That message is a good starting point for Christians to get into the specific teachings of the Bible, which is the Word of God.