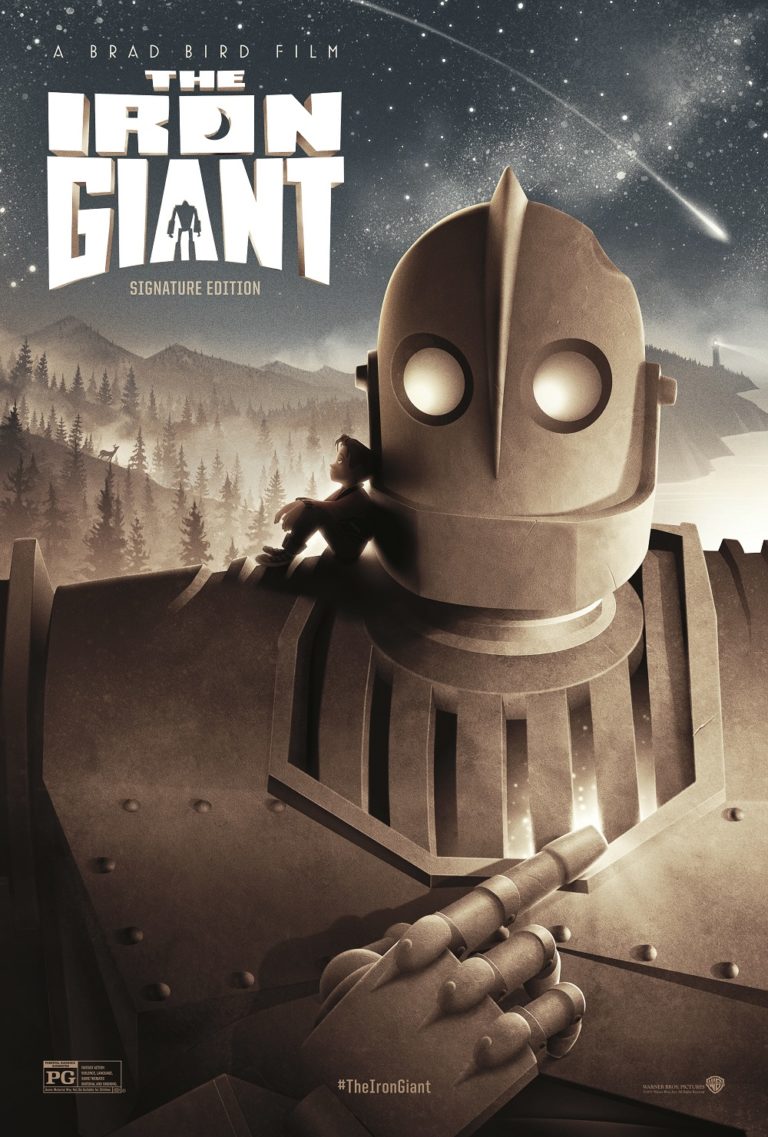 In THE IRON GIANT, young Hogarth befriends a giant robot, which is designed for war, but is transformed by love in the face of military attack. The story makes it seem like all guns are bad and includes problems in describing the soul. Yet, the story also has wonderful elements of love overcoming evil, death and resurrection.

THE IRON GIANT has surprised the major entertainment studios in Hollywood. After several attempts at animation which failed to find an audience at the box office but which were appreciated by MOVIEGUIDE® (CATS DON’T DANCE and QUEST FOR CAMELOT), Warner Bros. was about to give up and leave the animated feature field to Disney, until they acquired THE IRON GIANT. Surprising everybody from the studio executives to the critics, THE IRON GIANT has had tremendous audience response from test screenings.

It is easy to see why this is a very well crafted movie. True, it doesn’t have the expensive animation of TARZAN, but in place of expensive effects and computer graphics, it has a very tight plot and great sound. It proves once again that, ultimately, the play is the thing that captures the attention, as William Shakespeare noted in HAMLET.

THE IRON GIANT opens in the middle of a storm and then tracks what seems to be a meteor falling to earth and hitting the ocean just off the Maine coast. However, a fishing boat captain discovers that this is no ordinary meteor, when he runs into a hundred-foot-high giant robot emerging from the ocean. The fisherman tells his friends, but nobody believes him. So, he calls Washington, D.C. Since the year is 1957, and Sputnik has just been launched by the evil Soviet Empire, fear of aliens and invasions is running rampant in Washington.

In fact, one Washington insider, Kent Mansley, who may be with the super-secret National Security Agency though he won’t say for sure, takes this sighting very seriously. Therefore, he travels to the small Maine town to find out what is happening. Meanwhile, little Hogarth Hughes, one of the wisest, spunkiest, most courageous young heroes in the history of animation, finds out that his home TV antenna has been eaten. With the self-reliance and fortitude only available to youth, he goes out to track down what he discovers to be an iron giant.

He finds out that this giant is not such a bad sort. In fact, with a little bit of love and care, the giant becomes quite a friendly companion to Hogarth. Rightfully so, Hogarth is concerned about the reaction of adults to this giant. So, he tries to keep him hidden in the junkyard of his beatnik friend Dean.

Eventually, however, word gets out and Mansley sets out to rid the world of this dangerous invader. Dangerous the giant is, with built-in defense mechanisms that can throw energy balls and waste conventional weapons as if they were mere toys. Love, however, overcomes the giant’s programming to kill, even defensively, and the ending has a powerful emotional resonance with redemption and resurrection.

If this sounds pretty good, it is. There are a lot of positive things going on here. Clearly, the giant was a weapon, or a gun as Hogarth calls him. Clearly, it is Hogarth’s love that gets the giant to choose the path of peace. However, poor usage and terminology muddle this positive message. The story makes it seem like all guns are bad, and that, when the giant chooses to save the town, he is now no longer a gun. However, the action shows something otherwise. Clearly, he uses his military weaponry, i.e., his missile capacity or more sophisticated form of gun, to destroy an incoming missile. So, the real message, contradicted by the dialogue, is that guns can be used for good or bad.

THE IRON GIANT is really the FRANKENSTEIN story. He is labeled as bad. He is a creature, and he has a capacity for good and bad. He is misunderstood, but he uses his power ultimately for good. However, this monster is not made of flesh fresh from the grave, but from metal fresh from outer space. So, there is a deeper alien, like ET, and technological, like many of the humanization of the humanoids in the first STAR TREK movie or BLADE RUNNER, reconciliation suggested by the film.

Furthermore, the movie has this wonderful theme of love overcoming evil, death and resurrection, very Christian elements. However, the dialogue talks about some kind of pleasant New Age concept of the soul living in eternal bliss which contradicts the truth. Even so, the robot must either choose to follow his self-destructive sinful nature or choose the good. As the Bible says, he has to choose this day whom he will serve.

Little Hogarth is asked to say grace at the dinner table – a wonderful nod to the Golden Age of LEAVE IT TO BEAVER and LASSIE days, but his grace comes close to cynicism and perhaps something worse as he attempts to distract his mother from a piece of the robot, which is trying to reunite with the robot body.

Also, the government has portrayed the villain as an McCarthyesque government agent with simplistic irrational fears. In contrast, Dean, the beatnik scrap artist, is portrayed as the good guy, though slightly muddled. Fortunately, it is the General who decides not to listen to the off-kilter ravings of Mansley.

Ted Hughes, who is the Poet Laureate of England, wrote THE IRON MAN in 1968. The book told the story of a giant metal machine of mysterious origins that frightens residents of a small town with its arrival in the late 1950s. The machine finds humanity through its friendship with a nine-year-old boy named Hogarth, ultimately saving the townspeople from their own fears and prejudices.

The creator of THE IRON GIANT movie, Brad Bird plans to etch his name in animation history with an animated feature like no other. Over the years, he has devoted his talents to THE SIMPSONS and KING OF THE HILL, but THE IRON GIANT is his feature film debut.

Noting that CATS DON’T DANCE was a case study in how great animated films can be made cheaply and effectively, Brad Bird said, “I can barely contain myself when I imagine what kind of animated feature our best and brightest could do if set loose in a different direction. For me, the golden age of feature animation has yet to begin.” With THE IRON GIANT, Bird seems to be heralding the beginning of a golden age in animation.

This movie works in spite of some politically correct concepts and dialogue, and in spite of some pretty strong profanities. This is one of the most exciting animated movies ever made. The children at the screening loved it. The word of mouth is going to be great, but the reason for this in-depth review is so that you can discuss the difference between the words and the actions in this captivating movie with your susceptible children if you should choose to see it.

Writer: Brad Bird, Tim McCanlies BASED ON THE CHILDREN'S BOOK BY: Ted Hughes