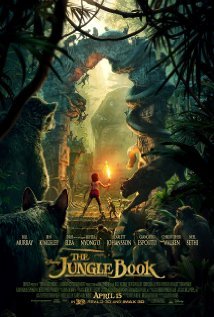 THE JUNGLE BOOK is a more dramatic, live-action remake of Disney’s 1967 cartoon classic about a boy raised by wolves who comes into conflict with an evil tiger that wants to kill him. After being lost in the jungles of India, a little boy has been raised by a black panther and a pack of wolves. Naming him Mowgli, they are trying to teach him the laws of the jungle and the code of the wolf pack. One day, during a bad drought, an evil tiger named Shere Khan threatens Mowgli’s life. Mowgli’s animal friends tell him he must return to the local man village, but Mowgli doesn’t want to leave the only home he’s ever known.

THE JUNGLE BOOK is beautifully and wonderfully made. The script and performances are superb, and the visuals are stunning. The movie keeps the delightful humor and two of the songs from the 1967 classic. THE JUNGLE BOOK stresses family values and looking out for one another. It’s an instant family classic, but some intense action scenes involving menacing animals warrant caution for younger children.

(BBB, C, FR, VV, N, M) Very strong moral worldview where society is based on natural law, with “the law of the jungle” respecting both the individual and the group (“the strength of the pack is the wolf and the strength of the wolf is the pack”) and centering on serving one another and working together when the society is threatened by external forces (including natural ones), it’s stated that violating the law of the jungle invites death and obeying the law brings life and prosperity, but there are also some light, mostly implied redemptive elements of grace and forgiveness, so the movie avoids being totally legalistic, plus there’s a line where an animal says the elephants created the jungle, the mountains and the rivers but did not create mankind and the other animals bow down to the elephants because of this and because they are obviously the biggest, most powerful animals in the jungle; no foul language; some strong and light action violence includes tiger attacks panther, tiger throws wolf off a small mountain, python tries to squeeze boy and eat him, but a bear intervenes, large ape chases boy, large temple crashes down around monkeys, characters fall, fire spreads through forest, stampeding water buffaloes, animals fight off tiger and tiger fights them; no sex; upper male nudity of boy in loincloth; no alcohol; no smoking or drugs; and, villain is out for revenge, monkeys want to steal the secret to fire, monkeys kidnap boy.

THE JUNGLE BOOK is a more dramatic, 2016 remake of Disney’s beloved 1967 animated classic about an Indian boy raised by wolves, who comes into conflict with an evil tiger who wants to kill the little “man cub.” THE JUNGLE BOOK is an instant family classic with lots of exciting action, wonderful special effects, a superb script, excellent performances, funny subplots, and a proto-Christian message that disobeying the natural moral law brings death and places everyone in danger.

JUNGLE BOOK opens with the little “man cub,” Mowgli, running through the forest with his wolf brothers while their friend, Bagheera the black panther, chases them. Bagheera is trying to teach Mowgli how to run from danger like the wolves, but Mowgli fails the test. Bagheera urges Mowgli to take the exercise more seriously, but Mowgli is still just a carefree little boy, because humans grow at a slower rate than animals.

Back at the wolf pack’s home, Mowgli’s adopted wolf “mother,” Raksha, and the leader of the pack, Akela, teach Mowgli and the cubs about the “law of the jungle.” Violating the law brings death, they tell them, but, in the moral code of the wolf pack, the pack has a duty to each wolf, and each wolf has a duty to the pack. With this symbiotic relationship, everyone is safe, and so is the wolf pack.

As the rainy season ends and the new dry season begins, a drought occurs in the jungle. The drought exposes a huge rock in the middle of the watering hole. So, the jungle animals declare a truce so that everyone can come to the watering hole together, without fear of being eaten. While they’re doing this, the tiger Shere Khan suddenly returns. When he sees that the wolves are taking care of Mowgli, a man cub, Shere Khan gets angry. The man cub will endanger us all, Shere Khan declares. He demands the wolf pack turn Mowgli over to him so he can kill him. The pack refuses. Since the truce is still in effect, Shere Khan tells them he will return when the rainy season begins again. They better turn Mowgli over to him then, he warns, or else.

When the rainy season begins, Bagheera and the wolf pack decide Mowgli must leave the jungle and return to the nearby man village. Mowgli reluctantly leaves with Bagheera, but Shere Khan follows them. Bagheera and a water buffalo stampede save Mowgli from Shere Khan’s grasp, but it’s only a matter of time before the evil tiger finds Mowgli again. When he does, will Mowgli survive?

Director Jon Favreau (IRON MAN, IRON MAN 2 and ELF) has directed an instant family classic in this version of THE JUNGLE BOOK. The movie is a cinematic delight, with lots of exciting action, a superb script, excellent performances, funny subplots, and wonderful, eye-popping visuals and special effects. The movie combines the more serious aspects of the original JUNGLE BOOK stories by Nobel Prize-winning author Rudyard Kipling with some of the humor and two of the memorable songs from the 1967 animated classic by Disney. Thus, amid all the excitement and drama of Mowgli’s story, moviegoers will also hear Bill Murray as Baloo the Bear sing the joyous ditty “Bare Necessities” from the cartoon and Christopher Walken as King Louie the Gigantopithecus sing the ironic, winsome lyrics to “I Wanna Be Like You.” Last but not least, the young boy who plays Mowgli, Neel Sethi, is perfect. He carries this movie on his small shoulders in a compelling way that’s impressive. His interaction with the animals, the sets and the CG special effects is virtually seamless.

THE JUNGLE BOOK is a family movie in many ways. Mowgli’s adoptive animal parents show true love and caring for him and his safety. They look past the dangers that his humanity can bring to them to see the lovable boy underneath. Thus, Bagheera the panther, Baloo the bear and the wolves become the loving, caring family Mowgli lost.

In addition, the animals teach Mowgli the “law of the jungle.” Obeying the law brings life and prosperity, but disobeying it brings death and danger. Part of that law is the moral code of the wolf pack. Essentially, the pack serves each wolf, but the wolf also serves the pack. These teachings echo biblical law and its system of mutual rights and obligations. Rights without obligations are lawless, but obligations without any rights are legalistic and tyrannical. This is a great, positive message that’s still highly relevant even today. It’s taken directly from a poem Rudyard Kipling wrote for the original JUNGLE BOOK stories.

THE JUNGLE BOOK has no foul language and no lewd or crude elements. However, there’s some intense and not-so-intense action and some scary and not-so-scary fight scenes, so caution is advised for younger children.