THE MAN WHO INVENTED CHRISTMAS 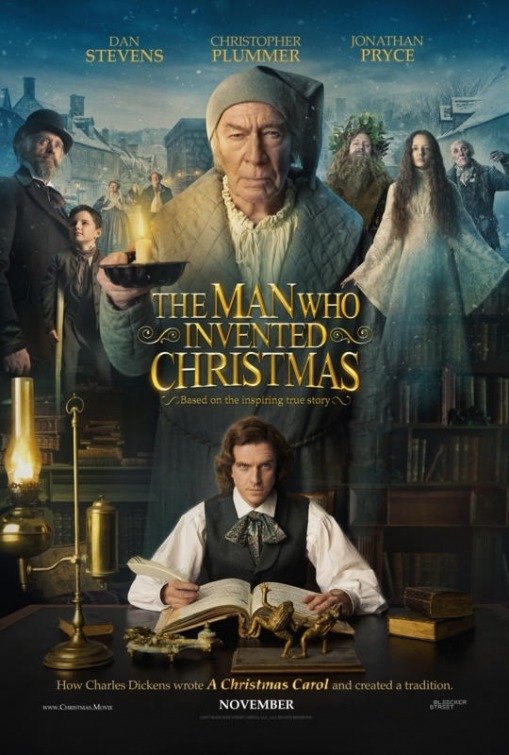 THE MAN WHO INVENTED CHRISTMAS is a thoroughly delightful, enthralling movie about how Charles Dickens crafted the beloved Christmas classic A CHRISTMAS CAROL. A year after he wraps up a crowd-pleasing tour in America, Dickens finds himself overwhelmed with debt. He desperately needs to write another hit. Miraculously, he happens upon the idea for A CHRISTMAS CAROL, but the publishers say Christmas books aren’t popular. So, he decides to finance the book himself. Meanwhile, his irresponsible father shows up on his doorstep. Can Dickens finish his book in time for Christmas? Can his father reconcile with his son?

THE MAN WHO INVENTED CHRISTMAS is full of laughter, tears and brilliance. Dan Stevens gives a magnificent, exuberant performance as Charles Dickens. Funny, ingenious scenes show Dickens interacting with characters from A CHRISTMAS CAROL. Heartfelt scenes show Dickens trying to come to terms with his own miserly attitude toward his own father. THE MAN WHO INVENTED CHRISTMAS is a brilliant celebration of the Christmas spirit, one of the best Christmas movies ever made. Some scary scenes warrant caution for younger children, however.

Dominant Worldview and Other Worldview Content/Elements:
Very strong Christian, moral worldview about how Charles Dickens crafted the beloved Christmas classic A CHRISTMAS CAROL and virtually invented the way we celebrate Christmas today and brought the Christmas spirit to life for future generations, plus strong capitalist content, slightly mitigated by a joke about the “unseen hand” of the free market system.
Foul Language:
No foul language.
Violence:
protagonist gets angry a few times and throws objects when he gets writer’s block and a few scary scenes such as characters encounter the Ghost of Christmas Yet to Come, a couple of visits to cemeteries, boy is forced to work in a scary factory, and one of the other boys in the factory drops a dead rat on the boy’s work area.
Sex:
No sex.
Nudity:
No nudity.
Alcohol Use:
Light alcohol use.
Smoking and/or Drug Use and Abuse:
No smoking or drugs.
Miscellaneous Immorality:
Protagonist won’t confide in his wife, borrows too much money and is estranged from his father, who’s a dreamer.

The movie opens with Charles Dickens on tour in America in 1842. Dickens is basking in the successful glow of his early successes, especially OLIVER TWIST. A year later, however, his new novel, MARTIN CHUZZLEWIT, which is being released a chapter at a time, isn’t doing so well, and Dickens is suffering from writer’s block. Making matters worse, the expenses for his book tour and his extravagant lifestyle, which include supporting his wife, several children and servants, have piled up. As a result, Dickens is afraid he’s going to end up in debtors’ prison like his father did.

One night, he hears his children laughing and crying over a ghost story being told by the family’s new, young Irish maid. This, and his difficulties of securing an advance for a new book or a loan, inspire him to start writing A CHRISTMAS CAROL. As he writes the book, the characters he writes about come alive and speak back to him, especially old Ebenezer Scrooge, who’s anxious to tell Dickens “my side of the story.”

However, no one will give Dickens an advance for the book, despite help from his longtime friend and manager, John Forster. No one cares about Christmas these days, the publishers say. So, Dickens decides to finance the book himself, but the decision puts additional pressure on him to finish the book in time for Christmas.

Meanwhile, Dickens’ irresponsible father shows up on his doorstep with his mother. This only reminds Dickens of the time he was forced to work in a filthy, rat-infested factory among other child workers because his parents and younger siblings were sent to a debtors’ prison to work off the father’s debts. The father brings along a pet crow for their grandchildren, which only increases the distractions in the house while Dickens tries to write A CHRISTMAS CAROL.

Can Dickens finish the book in time for Christmas? Even more importantly, can Dickens’ father reconcile with his son?

THE MAN WHO INVENTED CHRISTMAS is full of laughter, tears and brilliance. Dan Stevens gives a magnificent, exuberant performance as Charles Dickens. The great Christopher Plummer (THE SOUND OF MUSIC, UP and MURDER BY DECREE) delivers a lively performance as the cantankerous Mr. Scrooge. It’s a perfect holiday movie for Thanksgiving and the Christmas season!

Recently, a reviewer said in a review about a movie based on author J.D. Salinger’s work that it’s hard to make a writer’s work seem interesting or exciting in a movie. That’s certainly not the case with THE MAN WHO INVENTED CHRISTMAS. The filmmakers have solved this alleged problem by having Dickens interact with the characters in his book. Not only does he have lively discussions with them, they also act as a kind of Greek chorus commenting on Dickens’ own personal story. At one point, Scrooge reminds Dickens that Dickens’ attitude toward his father is just as miserly as Scrooge’s own attitude toward accumulating wealth. The benefit of having the characters in A CHRITSMAS CAROL interact with Dickens while he’s writing not only illuminates life of Dickens, it also allows the movie to do a few powerful scenes from A CHRISTMAS CAROL.

Like the book on which it’s based, THE MAN WHO INVENTED CHRISTMAS is a celebration of Christmas and the biblical sentiment of the Birth of Christ, “Peace on Earth, good will toward men.” In the movie, Charles Dickens overcomes the ordeal of writing his book and dealing with his father by remembering something his father taught him, that anyone can lift the burden of another person. Also, although the movie isn’t an evangelical treatise on salvation by grace through faith in Jesus, the movie shows the father as well as Tiny Tim using the beloved blessing from A CHRISTMAS CAROL, “God bless us, everyone!” Ultimately, A CHRISTMAS CAROL is a classic story of redemption, and so is THE MAN WHO INVENTED CHRISTMAS.

THE MAN WHO INVENTED CHRISTMAS is free of foul language. However, there are some scary scenes requiring caution for younger children. For instance, in a flashback to Charles Dickens working in the factory, another boy puts a dead rat on the bench where Dickens works.

Rent or Buy THE MAN WHO INVENTED CHRISTMAS: