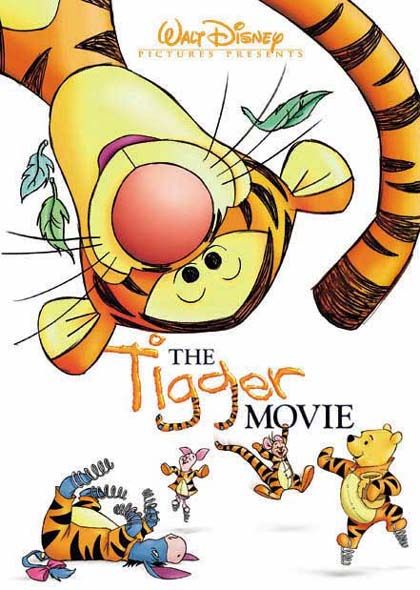 THE TIGGER MOVIE recaptures the cuddly spirit of Walt Disney’s three featurettes on Winnie the Pooh and his friends made in 1966, 1968 and 1974. In this one, the first feature-length motion picture set in the Hundred Acre Wood, Tigger, the boisterous, bouncy feline, goes searching for his “gigantical, stripedy” family tree. He is sad that he doesn’t have any other tiggers to go bouncing with him. His friends go out of their way to help him, but their efforts end in failure. Finally, a test of their friendship shows everyone what true caring really means.

THE TIGGER MOVIE is a fun picture that will not disappoint most fans of the Winnie the Pooh stories or the earlier Winnie the Pooh movies by Disney. Director Jun Falkenstein, who also wrote the script for THE TIGGER MOVIE, has taken great care in delineating Milne’s famous characters. Their strengths and foibles drive the basic storyline and enrich the details. The voice talent also performs well. Best of all, the movie teaches the importance of having caring friends. There is even a message of sacrificial Christian love imbedded in the story. As Tigger himself might say, “That’s tiggerific!”

(BBB, C, L, V, M) Strong moral worldview with Christian elements of caring, sacrifice & friendship; 1 use of the word “heck” by Tigger; very mild slapstick violence (mostly pratfalls & near misses) plus mildly scary scene with big avalanche; and, Tigger imagines meeting hundreds of other tiggers, including a Marilyn Monroe type whose skirt blows up like in the famous Monroe scene from THE SEVEN YEAR ITCH & including some female tiggers acting as dancing girls in old Hollywood-style musicals, but nothing really salacious & nothing else that might be objectionable.

Moviegoers of all ages can return with Christopher Robin to the Hundred Acre Wood this winter in Walt Disney’s new animated work, THE TIGGER MOVIE. Based on the beloved characters created by noted playwright and journalist, A. A. Milne, the movie recaptures the cuddly spirit of Disney’s three featurettes on Winnie the Pooh and his friends made in 1966, 1968 and 1974.

This time the focus of the story is on Tigger, the boisterous, bouncy feline who inhabits the Hundred Acre Wood. Although he has wonderful friends and young Roo is a great bouncing partner, Tigger begins thinking that being the one and only of his kind is rather lonely. Maybe he’s not the only tigger around. He springs into action to search for the most “gigantical, stripedy” family tree in the wood. Little Roo tags along, and Tigger teaches Roo about the biggest, most stupendous bounce that tiggers can do. This bounce comes in handy after Tigger accidentally and unknowingly loosens a huge bolder that happens to land on Eeyore’s house.

Everyone in the Hundred Acre Wood tries to help Tigger find his family tree, but the search is fruitless. Roo suggests that Tigger write a letter to the other tiggers. When, however, the letter does not get answered, Tigger’s friends decide to write him an anonymous letter from his real family. When even that fails, his friends think of another scheme. This final idea leads to a test of friendship which shows everyone what true caring really means.

THE TIGGER MOVIE is a fun picture that will not disappoint most fans of the Winnie the Pooh stories or the earlier Winnie the Pooh movies by Disney. Director Jun Falkenstein, who also wrote the script, has taken great care in delineating Milne’s famous characters. Their strengths and foibles drive the basic storyline and enrich the details. This makes it easy for the audience to identify with all their personality traits, from Roo’s admiration for Tigger to Rabbit’s cautious planning. Those traits take a wonderful comical turn when the gang writes their letter to Tigger. “Eat well,” Pooh characteristically writes, while Piglet, no less characteristically, writes, “Stay safe and sound.”

Piglet, by the way, is still voiced by famous TV character actor John Fiedler, the only member of the current cast remaining from the original movies. Fiedler has appeared in countless TV shows for nearly 40 years, including THE BOB NEWHART SHOW, the original STAR TREK and many others. Helping to make THE TIGGER MOVIE such a joy to watch and hear, besides Mr. Fiedler, is the voice talent of Jim Cummings, who plays both Tigger and Winnie the Pooh. Mr. Cummings does an excellent job of impersonating the voices of the actors who played those roles in the original movies, ventriloquist Paul Winchell and Sterling Holloway, respectively.

Of course, younger children will probably enjoy THE TIGGER MOVIE most of all. Still, at the screening, many of the older children and adults enjoyed watching the characters and even clapped at the end of most of the songs. So, THE TIGGER MOVIE is one animated feature that the whole family can enjoy. That may not be the case with other feature-length cartoons designed for children.

Best of all, the movie teaches the importance of having caring friends. Tigger’s friends go out of their way to help him once they realize Tigger is sad about not having any other tiggers to go bouncing with him. In the movie’s climax, everyone helps each other when they are caught in a terrible winter storm. They even risk life and limb. Thus, a message of sacrificial caring is imbedded in the action of the story. Like Jesus Christ says, the greatest love is when someone is willing to lay down one’s life for a friend. There’s obviously a whole lotta love in the Hundred Acre Wood. As Tigger might say, “That’s tiggerific!”

Rent or Buy THE TIGGER MOVIE:

Writer: Jun FalkensteinBASED ON CHARACTERS CREATED BY: A. A. Milne