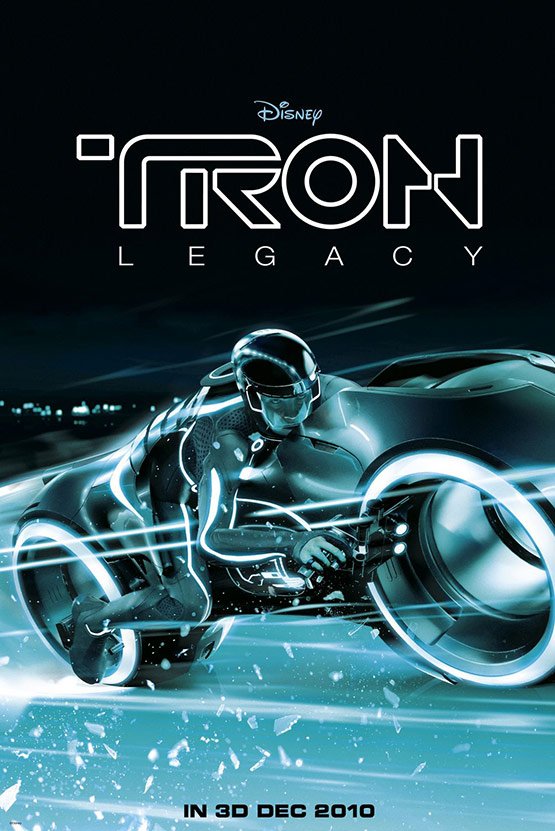 TRON: LEGACY picks up the story of the original TRON, which pioneered the use of computer graphics in 1982. The story opens with Kevin Flynn, a computer tech visionary, mysteriously vanishing after seeing his son Sam. Years later, Sam appears to get a message from his father. Sam finds his father’s secret office and gets digitized into the amazing world of Tron. There, he meets Clu, his father’s digitized surrogate gone rogue, who tries to kill Sam. Clu is planning to travel through the digital portal and control the real world of human beings. Sam and Kevin must fight off Clu and his massive army to save the world.

At the heart of it, TRON: LEGACY has a very powerful, redemptive father-son story. Jeff Bridges and Garrett Hedlund are terrific as the father and son. These aspects of the story, along with the amazing visual effects and music, will capture the hearts and the minds of viewers. However, the movie contains many references to Zen meditation, which could have been rebuked more strongly than they are. Also, there is lots of action violence and some annoying metro-sexual characters, so caution is warranted.

(C, BB, Pa, FR, L, VV, A, M) Light Christian worldview containing strong moral content/tone with discussions of inventor creating a universe, good versus evil but ultimately the evil is just trying to do what the inventor wanted, and a lot of overt discussion of Zen meditation as something very worthwhile but the inventor has to forsake Zen to save his son so the ultimate message is sacrifice, not non-being; seven light obscenities, one borderline hard to hear profanity; lots of strong action violence where lots of electronic digital characters get sliced, diced, beaten, killed, arms cut off, heads cut off, but they all ultimately dissolve into digital bytes so it’s not real violence though the hero does bleed and the father figure deconstructs, merging with his nemesis, but ultimately lightweight though constant intense violence in a violent world; characters hugging and holding onto each other in the background in digital café; tight-fitting, provocative costumes and many edgy metro-sexual costumes and Zuse/Castor character is very flamboyant; drinking some potent cyber drinks; no smoking; and, cyber spies, disloyalty, greed, anti-Big Business elements, and environmentalist elements but they all seem to be rebuked.

TRON: LEGACY picks up the story of the original TRON, which pioneered the use of computer graphics in 1982. It is a much more emotional and exciting movie than the original, which fell flat at the box office, although it became a cult favorite.

The movie opens with Kevin Flynn, played by a young-looking Jeff Bridges, telling a story to his young son, Sam, about a digital world he has created, which has a character that fights for him and all the users, named Tron, and a character named Clu, who is Kevin’s creative persona in the world of the grid and who is charged with creating the perfect world.

Kevin tells his son there’s a miracle occurring in this digital world. He leaves to go to his lab but never returns. Evidently, Kevin was the most successful game producer of all time, so some people think he took his money and disappeared, but others think something nefarious happened to him.

Years later, Sam, the son, has dropped out of college. Sam takes personal pleasure in playing practical jokes on his father’s company, Encom, which is being run by a bunch of greedy, miserable bureaucrats. Sam is the largest stockholder, but he refuses to accept the responsibility – even when his father’s best friend, Alan, wants Sam to take over the company. Encom is about to introduce Operating System 12. They say it has no improvements; it’s just a way to make more money. Sam’s practical joke is sneaking into Encom, breaking into the computers and giving away all the software. He escapes, only to be captured by the police.

When Sam gets release and goes to his warehouse home, Alan shows up to tell him he got a page from his father. Sam pretends to be disinterested but goes to the old Flynn Arcade, finds his father’s secret office and gets digitized into the amazing world of Tron.

Kevin’s surrogate, Clu, has attempted to create the perfect world, but it is a world of constant violence, with the digital characters playing violent gladiatorial games on motorcycles, private aircraft and other digitized equipment. Sam meets Clu and thinks it’s his father, but Clu tells him I’m not your father instead I’m here to kill you so I can create the perfect world. Clu is planning to travel with his army through the portal Sam opened so he can control the real world of human beings.

Sam is forced to fight and is about to be killed when he gets rescued by Quorra, who is his father’s confidante. Quorra takes Sam to meet his father, Kevin, who’s living in a lonely outpost and practicing Zen Buddhist meditation. Kevin explains to Sam that Clu wants to control everything, so, to thwart Clu, Kevin is practicing doing nothing.

Sam refuses to do nothing and wants to save his father and the human world. Sam forces his father to take action. Clu’s ally, Castor/Zuse, gets hold of Kevin’s disc, which contains the code to break through into the human world. Sam, Kevin and Quorra have to fight off Clu and his massive army to save the world.

At the heart of it, TRON: LEGACY has a very powerful, redemptive father-son story. Kevin realizes in the middle of the movie that he was seeking to create the perfect world, but his creation paled in the perfection that was right before his eyes in the person of his son. So, he has to forsake everything eventually to save the very best thing in his life, his son. This aspect of the story will capture the hearts and the minds of viewers.

Needless to say, there are also some negatives to the plot. Kevin’s dalliance with Zen, although eventually rebuked, is frustrating. Some of the metro-sexual characters are annoying. And, Michael Sheen is over the top as Castor, the flamboyant computer program. Some of the movie involves too much explanation, and some of it is silly.

Even so, it is a very exciting movie. The ending is extremely powerful, and a great ending can save almost any movie. TRON: LEGACY also contains wonderful, heartfelt emotions.

Jeff Bridges and Garrett Hedlund are terrific. Olivia Wilde is very good but sometimes seems too posed, as the director tries to accentuate her beauty. The music by Daft Punk is great. The visual experience is arguably the best of the year and certainly compares favorably with INCEPTION and ALICE IN WONDERLAND. The art direction, computer graphics and other aspects should have been promoted for Academy Award consideration.

In the final analysis, TRON: LEGACY is not quite as good as VOYAGE OF THE DAWN TREADER, but it will find a large audience and is a movie that can be commended with caution.