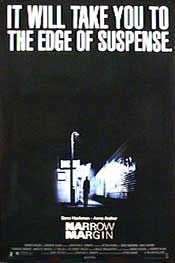 3 to 4 obscenities; two instances of graphic violence, including a decapitation; murder; policeman portrayed as corrupt; and, lying and theft.

Taking a friend’s advice, Carol goes on a blind date with a lawyer, only to witness his murder at the hands of an evil underworld gangster for stealing mob funds. Fearing for her safety, Carol flees to the Canadian Mountains to hide.

She is found by L.A. deputy district attorney Caulfield who must convince her to return and testify against the murderous mob leader. Suddenly, automatic gunfire shatters their cabin window. A vicious hit squad, informed of their whereabouts by Caulfield’s crooked partner, hovers in a helicopter above.

The copter chases Caulfield and Carol to a train station. Boarding a high-speed train which they plan to take cross-country to Vancouver, a deadly twenty hour game of cat-and-mouse ensues with an endless array of assassins.

While NARROW MARGIN is a fairly entertaining movie, it suffers from an inability to hold its audience. Had director Hyams taken advantage of the claustrophobic qualities of a train by better contrasting it with the openness and grandeur of the Canadian mountains, the mood and intensity of the movie would have been much more successful.

Also lacking are any interesting plot twists and turns, nor is much attention given to make the characters three-dimensional. It is difficult to empathize with Caulfield and Carol, mainly because there are just too many bad guys.

Still, there are some good things to say. The cinematography is captivating, and the musical score adds much-needed boosts to the drama. Though the film does contain two instances of violence (including a decapitation), as well as murder, it does not go overboard in graphic portrayals.

NARROW MARGIN does not attempt to convey any convicting lessons in morality, or make statements about life, although in one instance there is a vague hint at the importance of faith. Instead of saying, as Caulfield does several times, “everything will work out fine,” the Christian should be reminded of the necessity to completely and uncompromisingly rely on God’s grace to see him through each day, and not rely on his own skill (as Caulfield does) to overcome the obstacles the Adversary places before him.