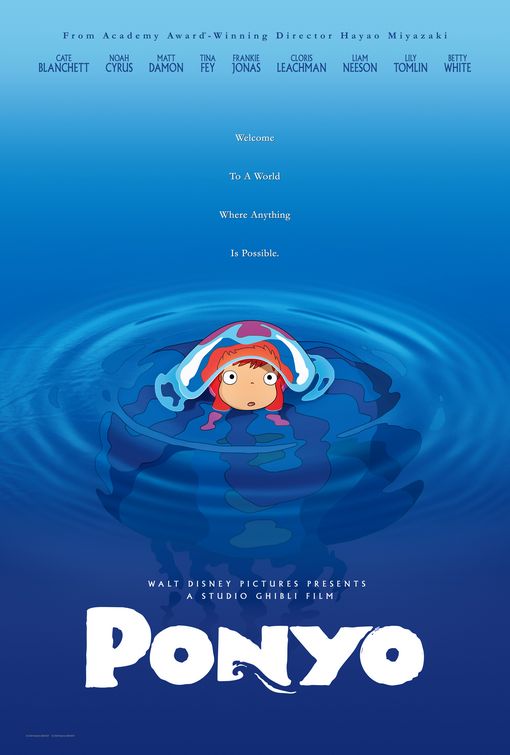 PONYO is a Japanese animated fantasy dubbed into an English version. Based loosely on Hans Christian Andersen’s masterpiece “The Little Mermaid,” the movie tells the story of a magical goldfish named Brünnhilde. The goldfish is rescued by a little Japanese boy named Sosuke (“Suh-sue-kay”). Taking her home, he calls her Ponyo and vows to protect her. Ponyo is re-captured by her stern father, a former human who has magically transformed himself to serve the earth and take care of the sea. Ponyo uses one of his powerful potions to escape and return to Sosuke. She wants to become human. Her use of magic, however, has upset the balance of nature. Only Ponyo and Sosuke can set things right again.

PONYO is often whimsical, cute and gentle. The colorful animation is very simple in some parts, but comes alive in extraordinary situations, especially during a terrific storm unwittingly unleashed by the goldfish’s use of magic. In the end, the heroine must give up magic to become human, but there is a reference to her mother being a sea goddess, though this is not clear. The magical elements and goddess reference warrant caution for children.

(PaPa, O, B, EE, V, M) Strong, slightly mixed pagan worldview involving the use of magic and where one magical creature is called the “Goddess of Mercy” at one point, but also where compassion, love and bravery are extolled and where it is clear that, to be truly human, one must give up the use of magic (in a fairy tale sense), and being human is seen as a good thing, plus some strong environmentalist messages going along with the pagan content, including character says he serves the Earth and has to keep the sea “in balance”; no foul language; light violence includes a huge storm and some scary characters and situations; no sex; no nudity; no alcohol; no smoking or drugs; and, some disobedience, magic helps keep nature in “balance” and two or so references to luck.

Dubbed into an English language version by Disney, PONYO is a Japanese movie of Hans Christian Andersen’s story “The Little Mermaid.” Like many versions of this beloved fairy tale, however, the bittersweet, spiritual ending has been changed.

Written and directed by Hayao Miyazaki, Japan’s elder statesman of animated feature movies, the story opens with a small goldfish, Brünnhilde, floating to the top of the ocean and washing ashore near a cliff. A little boy, Sosuke (“Suh-sue-kay”), picks her up, rescuing her head from a jar. Sosuke puts her into his pail with some ocean water and takes her home. He names her Ponyo and vows to protect her.

Ponyo’s father, a former human who has magically transformed himself so he can serve the earth under the sea and use magic, comes to get Ponyo. With help from magical ocean waves, he takes her back and locks her into a large compartment with scores of her smaller sisters. With help from her cute little sisters, Ponyo escapes and drinks her father’s most powerful potion, which allows her to use magic and grow legs and arms.

Ponyo returns to Sosuke, but her use of magic has upset the balance of nature. In fact, it has allowed the moon to come dangerously close to earth, making the sea cover most of Sosuke’s island home.

Ponyo’s mother shows up and viewers learn that she is a magical mermaid/sea goddess of some kind. She and Ponyo’s father decide that Sosuke must pass a test to prove his love for Ponyo. And, Ponyo must decide that, if she wants to become human and be with Sosuke, she has to give up magic.

PONYO is geared more toward younger children. As such, it is whimsical and imaginative, but much of the colorful animation seems simpler than Miyazaki’s recent movies. Some of the animated scenes, however, especially one long sequence that takes place during a huge storm, are quite amazing and exciting. Also, there are some very cute, gentle moments that will delight viewers of all ages.

Regrettably, PONYO has some problem areas. At one point, for example, when Ponyo’s mother swims by a ship, a sailor says she must be “the Goddess of Mercy.” Then, he and another sailor bow their heads in prayer as she passes. Also, it is clear that Ponyo’s mother and father use magical powers not derived from God. On the positive side, however, Ponyo is told she must give up the use of magic if she wants to become a human and be with Sosuke. So, giving up magic and becoming a real human being is seen as a good thing.

Thus, this movie has a slightly mixed pagan worldview where mystical, perhaps even supernatural, beings and magic exist, but one in which human beings must reject magic. The movie also extols compassion, love and bravery but contains some environmentalist messages. MOVIEGUIDE® advises caution for children because of the references to magic and the reference to being a goddess.