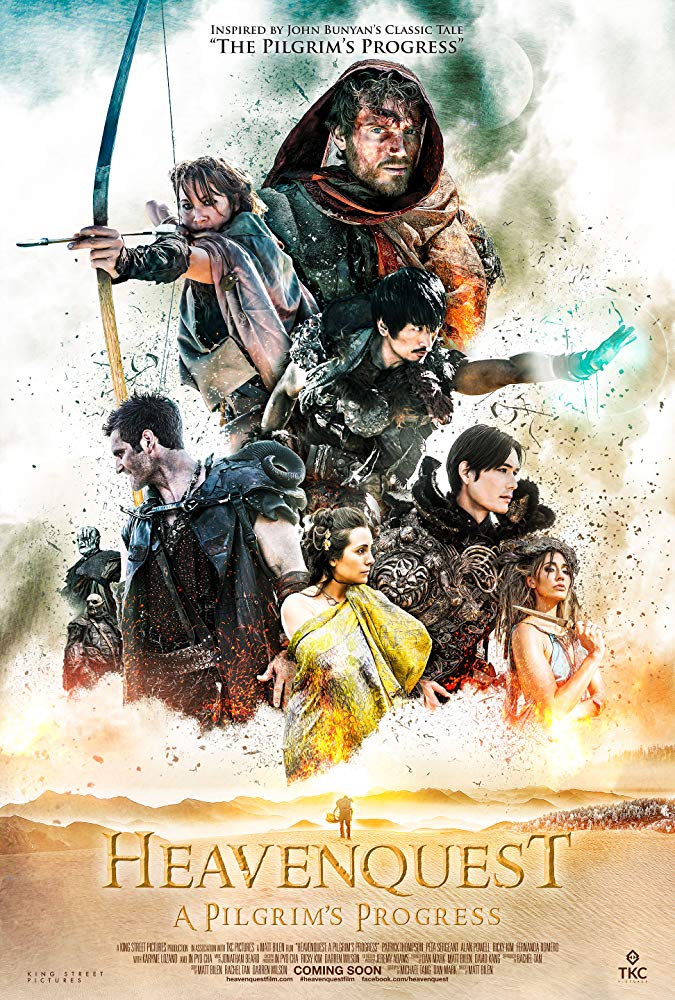 HEAVENQUEST: A PILGRIM'S PROGRESS is a fantasy imagining of the world before the events in PILGRIM’S PROGRESS, the acclaimed 17th Century Christian novel. The story follows Vangel (later known as “Evangelist” in PILGRIM’S PROGRESS) from his time as a snotty judge to a strong follower of the true King. Vangel is arrested by the evil King of the South, but escapes and flees to the North. Armed with the Record of the Ancients book, Vangel embarks on an adventure through haunted forests, dark swamps and enchanted mountains while being hunted by the evil King’s men.

HEAVENQUEST has a rough start, but the acting, pacing, effects, and storyline pick up as Vangel journeys to the North. HEAVENQUEST has a strong Christian, biblical worldview. The story of Christ is presented quite obviously through an allegory, with mentions of a One True King (God the Father), a Prince (God the Son) and an Interpreter (the Holy Spirit). Darkness can only be defeated by light, and supernatural prayer and intervention save the day. HEAVENQUEST does have some violence where people are killed, however, so caution is advised for children.

(CCC, BBB, O, Ab, VV, N, M):
Dominant Worldview and Other Worldview Content/Elements:
Very strong Christian, biblical worldview presented as an allegory about a King, Prince, Interpreter, and the prophets meant to unite the Kingdom, a “Record of the Ancients” symbolizes the Bible, there is a strong contrast between light and dark with mentions of supernatural forces, characters are transformed by the King’s power, a prayer ultimately saves the team, as the Prince responds to someone’s cry for help, plus one character is a witch, but she is presented as a villain meant to seduce the men and distract them from their mission, magic/mysticism is also used, but is meant to convey supernatural powers of the darkness and light and light ultimately wins, and the ultimate villain is named Apollyon, which is a biblical term describing a spiritual destroyer, and his story is the same as Lucifer’s in the Bible;
Foul Language:
One woman is disparagingly called a “whore” when the villain is trying to remind her of her past, but there are no obscenities or profanities
Violence:
A medium amount of violence with lots of blood such as characters are stabbed, axed and zapped
Sex:
No sexual situations
Nudity:
Brief upper male nudity, but it’s hard to tell with the action and armor
Alcohol Use:
No alcohol use, but a witch convinces two men to drink a potion meant to drug them and this is clearly presented as evil
Smoking and/or Drug Use and Abuse:
No smoking or modern drugs, but a witch drugs two men with powder, but this is seen as evil and the men must be saved by light; and,
Miscellaneous Immorality:
Very light miscellaneous immorality such as characters are clearly defined as good or evil, good characters serve the King while evil characters work for Apollyon and want to cause destruction, and there are some creepy characters trying to destroy Vangel and his team.

The movie opens as Vangel is brought before Aamon, a high-ranking servant to the King of the South. The North and South of the Kingdom of Eos are bitterly divided in a civil war, and the South is hunting and killing anyone who tries to defect to the North. Vangel tells Aamon he’s a judge and is loyal to the South. Aamon has dark powers and sees that Vangel has had visions of journeying to the North. He orders Vangel be sent to the fires to find out exactly what he knows. Meanwhile, one of Aamon’s advisers suggests Vangel is part of a prophecy that dictates five people will come together to unite the split kingdom. Aamon will stop at nothing to keep the prophecy from coming to pass.

When guards take Vangel away, it’s revealed that Vangel is very good at reading people and can infer their background and history from their responses. This angers the guards, and they determine to kill Vangel. Vangel kills them instead and escapes, but he is still trapped in chains.

After escaping, Vangel meets Bandy, a man who wants to defect to the North. As the two begin their journey, they are seduced by a witch who works for Aamon. Right before she kills them, a man named Elder uses light to save them.

Elder recognizes Vangel is one of the people in the prophecy and reveals that he’s also part of the prophecy. Elder gives Vangel the “Book of the Ancients” to guide his path. Elder tells Vangel that Elder is only a guide and can point Vangel in the right direction. With renewed conviction, Vangel heads to the North with Bandy.

HEAVENQUEST has a rough start with some hokey magic reminiscent of 1990s era television programs like POWER RANGERS. However, the acting, pacing, effects, and storyline pick up as Vangel journeys to the North. The strongest actors appear later in the movie, like In-Pyo Cha and Peta Sergeant, who play Elder and Ezera, respectively.

HEAVENQUEST has an strong, inspiring Christian, biblical, moral worldview. The story of Christ is presented quite obviously through an allegory, with mentions of a King (God the Father), Prince (God the Son), and the Interpreter (Holy Spirit). Darkness can only be defeated by light. Supernatural prayer and intervention ultimately save Vangel and his friends. There’s a powerful scene about the bondage of works, and how darkness creates an illusion of freedom while really entrapping someone who hasn’t experienced the Truth. Also, knowing the King transforms characters from violent murderers to people of light and purity.

HEAVENQUEST contains some violence, so caution is advised for older children. The powerful allegory makes the movie worth viewing once viewers get past some of the cheesy effects.