PRAY: THE STORY OF PATRICK PEYTON

"Finding Peace and Hope Through Prayer" 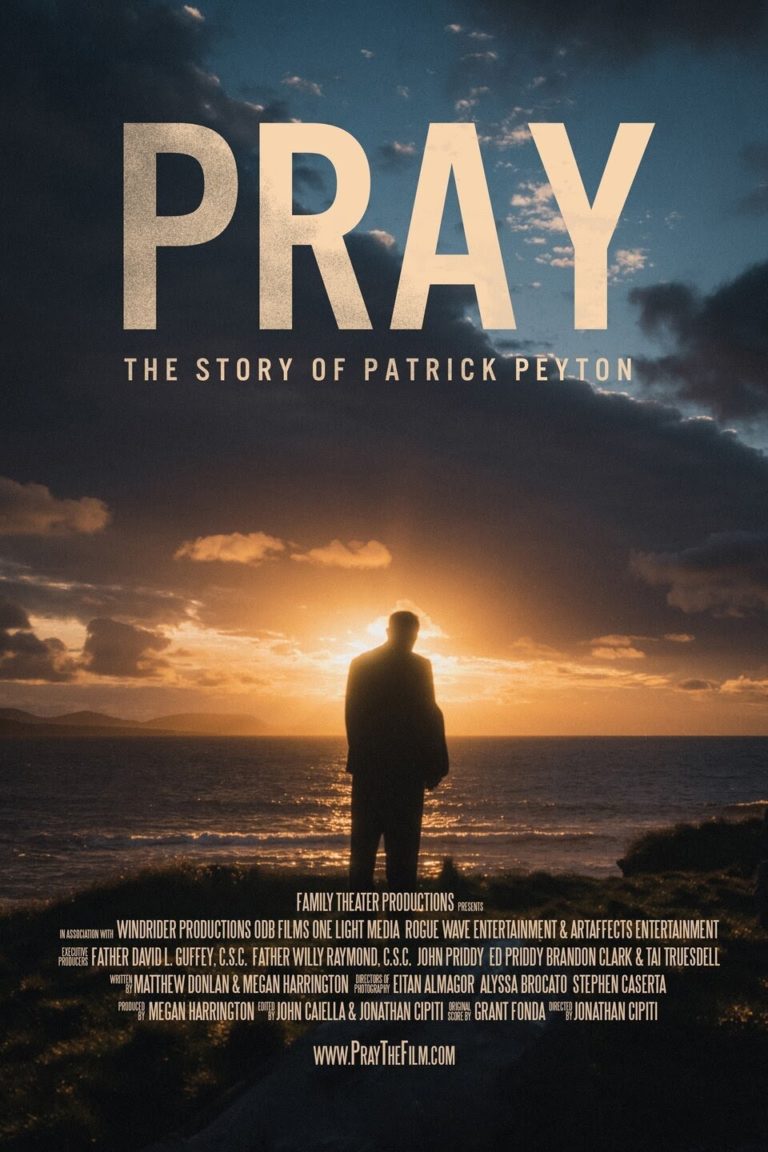 PRAY: THE STORY OF PATRICK PEYTON is a documentary about Patrick Peyton, wo was born in 1909. Exposed to the Gospel of Jesus Christ in Ireland, Patrick’s life is transformed, and he emigrates to the United States. In his 20s, prayer results in Patrick being miraculously healed from tuberculosis. On the cusp of World War II, he sends 20,000 letters to American families, asking them to pray. Patrick moves to Hollywood, where he starts a radio program. Never taking “No” for an answer, Patrick convinces Hollywood’s biggest stars, including Lucille Ball, Ronald Reagan, and Jimmy Stewart, to help him spread the message, “The family that prays together stays together.”

PRAY: THE STORY OF PATRICK PEYTON is an extremely well-produced, powerful documentary. Voiceover snippets featuring by Peyton are seamlessly edited with archival footage and testimonials of Peyton’s family and those whom he impacted with his zeal for prayer. The documentary has a strong Christian, biblical worldview stressing Jesus Christ and the Gospel, with little objectionable content. It’s nearly impossible not to feel inspired by Patrick Peyton’s legacy while viewing PRAY.

(CCC, BBB, AC, V, N, A):
Dominant Worldview and Other Worldview Content/Elements:
Very strong Christian, biblical worldview with an emphasis on family prayer, loving others where their at and looking to Jesus Christ as the ultimate hope for justice, with a quick mention of communism, but in a spirit of anti-communism, plus mentions of the praying the Catholic rosary and praying to the Virgin Mary, but praying the full rosary includes praying to Jesus Christ and the Holy Trinity
Foul Language:
No foul language
Violence:
Mentions of World War II with some archival footage but it’s not graphic and a reference to a man surviving a six-story fall
Sex:
No sex
Nudity:
Brief upper male nudity
Alcohol Use:
References to a man who loved alcohol but was transformed by God with the help of his wife’s prayer
Smoking and/or Drug Use and Abuse:
No smoking or drugs; and,
Miscellaneous Immorality:
Nothing else objectionable.

Ever wonder where the phrase, “The family that prays together stays together,” originates? Look no further than Patrick Peyton, a man who moved from Ireland to the United States in 1928.

PRAY: THE STORY OF PATRICK PEYTON is a powerful documentary about the value of family prayer, which becomes a passion of Irish native Patrick Peyton, who enlists the help of Hollywood celebrities to spread his message. PRAY has a strong Christian, biblical worldview stressing Jesus Christ and His Gospel, with little objectionable content.

Peyton was born in 1909 in Ireland. Peyton’s family had little means, and Peyton himself was somewhat of a brat growing up. However, in Ireland, “faith was as important as food or drink,” so young Peyton was exposed to the Gospel of Jesus Christ, which turned around his life. Peyton felt a calling to serve God, but he wanted to get married, something that a Catholic priest can’t do.

When Peyton was in his 20s and an immigrant to the U.S. working as a janitor in Pennsylvania, he coughed up blood. Peyton saw the doctors. They insisted he get tested for tuberculosis again and again. Eventually, he’s miraculously healed. Peyton felt a debt to the Virgin Mary for his good health and prayed to her accordingly.

On the cusp of World War II, Peyton sets a goal – get 10 million Americans to pray the rosary. His efforts were successful as he sent out 20,000 letters to urge families to get on bended knee. God had more for Peyton to share concerning prayer, and he left the northeast to go to Hollywood, CA.

In Hollywood, Peyton started his own radio show and gathered high-profile celebrities to lend their voices to the program. To start off, Peyton cold-called Bing Crosby for on-air talent, and Crosby accepted! Thus, Family Theater Productions was born. Over the course of several decades during the Golden Age of Hollywood, Peyton worked with the following stars to share his message of hope through prayer: James Dean, Jackie Gleeson, Gary Cooper, Lucille Ball, Maureen O’Hara, Ronald Reagan, Loretta Young, and Jimmy Stewart.

Peyton’s legacy of prayer continues today with that same catch phrase impacting families across the globe.

PRAY: THE STORY OF PATRICK PEYTON is extremely well-produced by Peyton’s Family Theater Productions. The voiceover snippets by Peyton are seamlessly edited with archival footage and testimonials of Peyton’s family and those whom he impacted with his zeal for prayer. The documentary has a very strong Christian, biblical worldview stressing Jesus Christ and His Gospel, with little objectionable content.