"Make a Joyful Noise Unto the Lord!" 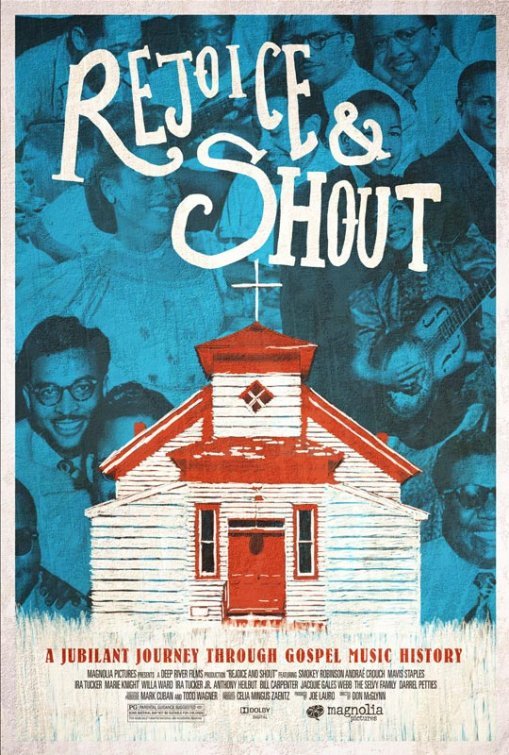 REJOICE AND SHOUT is a wonderful, joyful documentary surveying the history of black gospel music, including the Christian theology that drives it. It focuses on individual contributions by major performers, leaders and teachers. It includes interviews and commentaries from three gospel music historians and performers like Smokey Robinson, Mavis Staples and Andraé Crouch. Included are great, rousing performances by Staples, Crouch, Mahalia Jackson, and Claude Jeter and the Swan Silvertones. The best just might be the little girl who opens the movie with a tremendous rendition of “Amazing Grace.”

One may quibble that REJOICE AND SHOUT focuses too much attention on the impact of individual gospel music performers, leaders and teachers. This does make the movie seem a bit long. That said, REJOICE AND SHOUT is a soul stirring, inspiring homage to Almighty God, including Jesus Christ and the Holy Spirit. There are only a few very minor sour notes. For example, there’s one performance with four female dancers in short shorts. Also, there’s a brief politically correct nod to President Obama and his election simply because he’s the first black president. REJOICE AND SHOUT extols Christian faith repeatedly, however.

(CCC, BBB, FR, PC, V, D, M) Very strong Christian, moral worldview about the history of black gospel music containing many appeals, exhortations and much worship of Almighty God, including Jesus Christ and the Holy Spirit, plus extolling the benefits of being part of a church community and a cogent defense of the existence of God and the truth of Christianity, with slight antinomian or lawless content featuring female dancers in tops and short shorts during one number and a brief politically correct nod to President Barack Obama simply because he’s the first black president, although his obeisance to Muslims and his recent support of Planned Parenthood and continued support of abortion on demand are anything but Christian; no foul language; light violence in a few people’s movements during some ecstatic Pentecostal moments of being “slain in the spirit”; no sex, but some dancers in short shorts shake their legs during one musical number; no nudity, but some dancers in short shorts shake their legs during one musical number; no alcohol; some smoking but no drugs; and, some bias toward the African roots of modern popular music, including country music, that seems to slight its Scottish, Irish folk roots and one major gospel music songwriter/teacher is said to have written some dirty blues lyrics but that probably was before he devoted the second half of his life to gospel music so the movie may be a bit misleading there.

REJOICE AND SHOUT is a wonderful, joyful documentary surveying the history of black gospel music, with very strong Christian statement of faith in God and Jesus Christ, including a focus on the power of the Holy Spirit. There are only a couple minor sour notes that lessen the movie’s power.

The documentary starts out with a tremendous, soul-stirring performance of “Amazing Grace” by a young, nameless African American girl from The Selvy Family Singers. It then begins its survey of the history of black gospel music and its biggest stars. It starts, of course, with the Southern plantation owners during slavery bringing the African slaves to Christianity and church. Then, it picks up with the first black gospel record in 1902 by the Dinwiddie Colored Quartet. With interviews by three gospel music historians and singers like Smokey Robinson, the movie then proceeds to give a rundown of the history since then, by focusing mostly on the major leaders and performers in the field. Included are many great musical numbers. Among the highlights are Mahalia Jackson’s first amazing TV appearance on THE ED SULLIVAN SHOW in the early 1950s, a wonderful turn by Claude Jeter and The Swan Silvertones, a powerful performance by Mavis Staples of The Staples Singers, a solo by Sister Rosetta Tharpe, and two lead singers from the Dixie Hummingbirds trading off vocals at a rapid pace.

One may quibble that REJOICE AND SHOUT focuses two much attention on the impact of individual gospel music performers, leaders and teachers like Thomas A. Dorsey and the Rev. James Cleveland. This does make the movie seem a bit too long. That said, REJOICE AND SHOUT is a soul stirring, inspiring homage to Almighty God, including Jesus Christ and the Holy Spirit.

There are only several very minor sour notes. First, we would have loved to see a performance by Sam Cooke and the Soul Stirrers. Second, there’s one number where some dancers in flashy halter-tops and short shorts shake their legs in time to the music. Third, at the end, there’s a politically correct nod to President Barack Obama and his election, who’s connected to the ministry of The Rev. Martin Luther King, Jr., simply because Obama and the media consider him to be black. Finally, the movie seems to have some bias toward the African roots of modern popular music, including gospel and country music, apparently neglecting the importance of the Scottish, Irish folk music contribution. In this case, being Afro-centric is perhaps just as wrong as being Euro-centric.

Despite these very minor points, media-wise viewers, including Christians and Non-Christians, will find REJOICE AND SHOUT to be an impassioned, cheerful and engaging look at black gospel music and the role it plays in American life, yesterday and today.

“O come, let us sing unto the LORD: let us make a joyful noise to the rock of our salvation.”

Rent or Buy REJOICE AND SHOUT: