"On the Front Lines in Afghanistan" 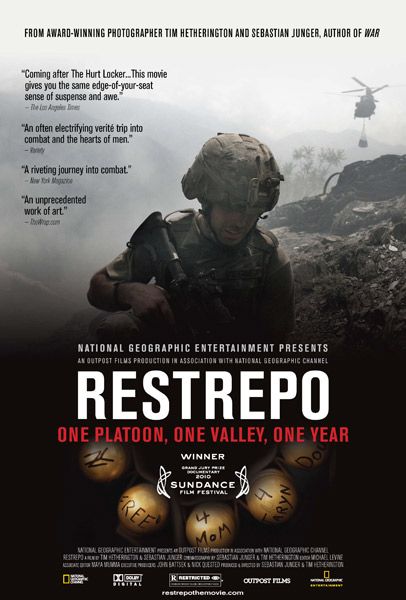 RESTREPO is a vivid documentary following a platoon of American soldiers in the Korengal Valley of Afghanistan. It follows the soldiers of Second Platoon, Battle Company, as they fight to build and maintain a remote 15-man outpost called Restrepo, named after a beloved platoon medic killed in action shortly after they arrived. The movie avoids commentary and politics to simply record the daily lives of the soldiers at the remote outpost. Most of the soldiers are very young, but are led by an older captain. One unforgettable operation results in a squad leader’s death. His tragic death leaves one soldier visibly shaken in a visceral way.

RESTREPO is a sympathetic portrayal of the soldiers in Second Platoon on the front lines, but it reveals some tension between local villagers and the Americans. So, the movie doesn’t particularly lend itself to advancing support for the war against the Taliban in Afghanistan. Instead, it leaves it up to viewers to make their own conclusions. Regrettably, the movie shows the soldiers using plenty of strong foul language and cracking two or three crude, off-color jokes. That and some intense combat situations warrant extreme caution.

(B, PP, PaPa, Ho, PC, LLL, VV, S, N, D, M) Light moral, strong patriotic worldview and elements (including a moment when officer allows men to have a silent prayer if they wish for a couple soldiers who died), some strong pagan behavior acted out (sometimes while joking or horsing around and sometimes in intense combat situations and while on dangerous army patrols) that will disturb or offend some, including a crude homosexual joke is made in one line of dialogue, plus the silent prayer moment cited above is a bit politically correct, an example, perhaps, of leftist, anti-religious bias that has crept into the U.S. military; about 94 mostly strong obscenities (including many “f” and “s” words), two strong profanities and two or three light profanities; strong, sometimes intense, live violence, but not graphic or gory, includes American soldiers treat some children and an infant who seem to have minor wounds from American artillery and bombs (the wounds are not graphically shown, especially amid the dirt that covers the children), Afghani points to a couple dead bodies covered up and tells Americans that the bodies were not Taliban fighters and were wrongly killed, explosions, planes bomb mountain areas, mortar fire, machine gun fire, soldiers fire automatic rifles, soldiers wrestle for fun, a couple shots of a dead soldier’s body (one time with his face showing from a mid-distance and once covered up with an army jacket), soldier breaks down when he sees his fellow soldier is dead, soldier describes his wounds and pain in a light manner but the audience can relate emotionally to his personal description, and some discussion of soldiers who have died in combat (but not graphic); two or three crude sexual comments, including one homosexual reference when a crude joke is made; upper male nudity of soldiers working and horsing around; no alcohol use; some cigarette smoking; and, soldiers wear tattoos and some possible miscellaneous content problems such as tension between peaceful Afghani locals and American soldiers as each tries to bridge a mutual communication gap and solider back from the front lines says he needs to take sleeping pills because of nightmares.

RESTREPO is a vivid documentary that follows a platoon of American soldiers in a remote outpost in the Korengal Valley of Afghanistan, said to be one of the most dangerous places in the country at the time the movie was shot, June 2007 to July 2008.

In the movie, two experienced journalists with film cameras, Tim Hetherington and Sebastian Junger, are embedded with the soldiers of Second Platoon, Battle Company, as they are deployed to the valley. As the soldiers begin to set up a remote 15-man outpost, a platoon medic named Restrepo is killed in action, so they name the outpost after him. The Restrepo outpost is surrounded by forested hills and mountains as it looks down on the narrow valley.

The movie avoids all narration, commentary and political context to simply record the daily lives of the soldiers at the remote outpost. Most of the soldiers are very young, but are led by an older captain. The captain tries to guide the men and lead them as professional soldiers while they fight boredom, do the manual labor of setting up and maintaining the camp, interact with local Afghani elders, and fight insurgents. One unforgettable military operation results in one soldier dead and two wounded. The death of Squad Leader Sgt. Larry Rougle of Utah leaves one of the soldiers visibly shaken in a visceral way that puts viewers right in the middle of this tragic event.

RESTREPO contains some goofy moments of soldiers horsing around and several intense moments. It is generally a sympathetic portrayal of the soldiers in Second Platoon and their lives on the front lines, but it reveals some tension between the local villagers and the soldiers. For example, the movie shows some children have been slightly wounded and traumatized by American artillery fire and bombs, and an Afghani man complains to the Americans about a few innocent men killed in such attacks. The Americans ask the local men, however, to help them expose and fight the insurgents so they can protect their families better.

The result of all this is that the movie doesn’t particularly lend itself to advancing support for the war against the Taliban in Afghanistan and Pakistan. Instead, it leaves it up to viewers to make their own political conclusions. One valid conclusion, however, might be that America has placed many of its soldiers in some thorny, impossible, no-win situations, for reasons that are too obscure or fuzzy.

Regrettably, the movie shows the soldiers using plenty of strong foul language and cracking two or three crude sexual jokes. Also, there is only one scene where the soldiers are encouraged (by the captain) to take a moment to say a silent prayer for their two fallen comrades. This scene makes one wonder if the soldiers wouldn’t be happier, and perhaps more successful, if they relied more heavily and more overtly on God in general or Jesus Christ in particular.

At the end, the movie reveals that the U.S. military has decided to pull out of the Korengal Valley. According to a Washington Post story on April 15, 2010 (see http://www.washingtonpost.com/wp-dyn/content/article/2010/04/14/AR2010041401012.html?sid=ST2010041401263), the military left the small isolated valley in April 2010 because it decided the insurgents fighting American troops were not Taliban leaders at all but a group of men led by a local timber “baron” upset by Afghan government rules against timber exports. This allegation contradicts some dialogue in the movie referring to foreign Muslim jihadists among the insurgents. It also contradicts an Associated Press report on April 14 (see http://www.foxnews.com/world/2010/04/14/exits-afghanistans-valley-death/) saying that Taliban fighters use the Korengal valley to smuggle foreign insurgents into other areas of Afghanistan. Apparently, in the recent surge strategy approved by President Obama, the U.S. has pulled back from remote outposts like Korengal to work on securing major population centers against the Taliban Muslims instead.

Be that as it may, RESTREPO shows the folks back home what it’s like soldiering and fighting in the more remote areas of Afghanistan. MOVIEGUIDE® does not know whether that’s really and truly valuable. We’ll leave that up to our readers, even though some of the ex-soldiers and family relatives of soldiers in the screening audience said after the movie that every American should see the movie so they can know what the average soldier fighting for freedom goes through every day.

The crude language in RESTREPO warrants extreme caution. Some viewers might also be disturbed by the death of Sgt. Rougle, which is a very intense, tragic experience. The movie doesn’t contain any extremely graphic violence, however.