REVOLUTION OF THE HEART: THE DOROTHY DAY STORY

"Promoting Christian Compassion for the Poor and Needy" 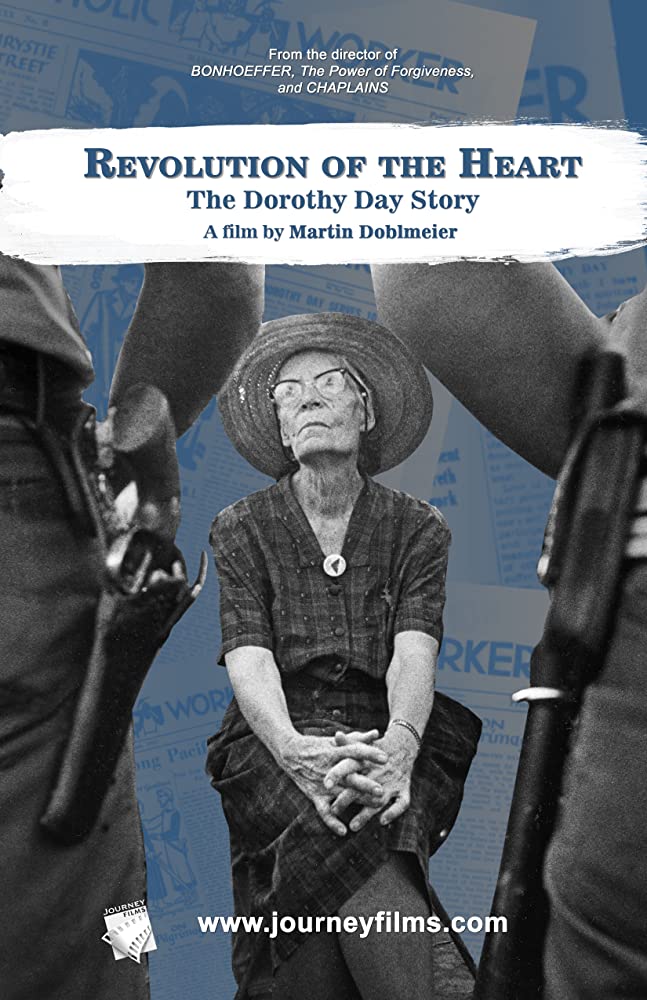 REVOLUTION OF THE HEART:  THE DOROTHY DAY STORY is a TV documentary about Catholic activist Dorothy Day. After converting to Catholicism from communism, Day founded a newspaper, The Catholic Worker, in 1933 during the Great Depression. The Catholic Worker supported worker rights and opened local houses for the poor, the homeless and the unemployed, offering hot meals and a place to sleep. Along with being an activist for the poor, Day was a champion for civil rights. However, her opposition to World War II led to controversy. Also, Day protested against nuclear arms, the Vietnam War and the exploitation of farm workers in the 50s, 60s and 1970s.

REVOLUTION OF THE HEART:  THE DOROTHY DAY STORY is entertaining and inspirational. It sheds light on a woman who impacted many people and continues to make an impact today. The movie promotes Day’s Christian approach to taking care of the poor, which centered on private charity, brotherly love and volunteer work rather than big government social programs. However, it could use more in-depth analysis of the more controversial aspects of Day’s social activism.

(CC, BB, AC, Co, FR, V):
Dominant Worldview and Other Worldview Content/Elements:
Strong Christian, moral worldview from a Catholic viewpoint promotes faith, prayer, civil rights, respect, taking care of the poor and needy, the dignity of human life and quotes some Bible verses, plus woman expresses opposition to big government and the welfare state a couple times, but movie also mentions woman’s earlier flirtation with communism and her ongoing friendships with some communists despite her later opposition to communism and socialism, and discusses woman’s pacifist tendencies (she rejected the Christian idea of just wars, even during World War II)
Foul Language:
No foul language
Violence:
Protest scene with police abuse of street protestors
Sex:
No sex but it is mentioned that Catholic woman expressed her opposition to sexual promiscuity during the 1960s youth movement
Nudity:
No nudity
Alcohol Use:
No alcohol use
Smoking and/or Drug Use and Abuse:
No smoking or drug use; and,
Miscellaneous Immorality:
Nothing else objectionable.

REVOLUTION OF THE HEART: THE DOROTHY DAY STORY is a TV documentary about Catholic activist Dorothy Day who co-founded in 1933 the Catholic Workers Movement, a liberal group with some free market tendencies that supported owning private property, taking care of the poor and advocating worker rights, but opposed concentrated power and wealth in the hands of only a few people. REVOLUTION OF THE HEART: THE DOROTHY DAY STORY focuses on how Dorothy Day’s Catholic faith, expressing itself through brotherly love, animated her concern for workers, the poor, civil rights, and the violence that comes from war, but it could use more in-depth analysis.

The movie opens with an introduction to Day, then proceeds to trace her life and her career of social activism. At age nine in 1906, after witnessing the San Francisco earthquake, Day and her family relocate to Chicago when the earthquake destroys her home. The earthquake’s aftermath, where people came together to help one another, Day was inspired to help other people.

Eventually, Day attended college and, against the recommendation of her journalist father, became a journalist herself. During her youth, Day lived a promiscuous lifestyle and pushed away religion to consort with a crowd of writers. Also, Day was attracted to communism and was friends with prominent figures in the Communist Party of America. She even interviewed Leon Trotsky, one of the architects of the October Revolution in Russia in 1917. At the same time, however, Day was introduced to Catholicism by acclaimed playwright Eugene O’Neill.

Eventually, after she and her second husband had a daughter in 1925, Day became increasingly attracted to Catholicism. However, her husband, a committed atheist, balked at getting married in the Catholic Church, so they separated while Day explored her newfound faith in New York City.

In December 1932 at the height of the Great Depression, Day returned to New York from a trip to Washington, D.C., where she had prayed for guidance about how to help workers and assist the poor. On her return, she met Peter Maurin, an older Catholic immigrant from France who had many ideas about how to do just that. Inspired by Maurin, who had taken a vow of poverty, Day began a newspaper, The Catholic Worker, and distributed the first issue at the May Day celebration on May 1, 1933 organized by the Communist Party. The newspaper was an immediate success and attracted Catholics form across the country. It circulation increased to 100,000 within a year.

At the same time, Day and Peter founded Houses of Hospitality, places where poor people and unemployed workers could find a meal and a bed. These houses provided meals, places to sleep and brotherly companionship for people who laced resources.

Along with becoming an activist for the poor, Day also fought for justice. She spoke in favor of labor movements and against Anti-Semitism. However, her pacifist, anti-war activities, especially against World War II, led to controversy, and subscriptions to the Catholic Worker dropped off dramatically. She continued her work with the poor and her antiwar activities after the war, taking part in demonstrations against nuclear arms, against racism and segregation, and against the Vietnam War. Her anti-war activities led to scrutiny from the FBI.

According to the documentary, by the time she died on November 29, 1980, the Catholic Worker had 30 Houses of Hospitality for the poor and the homeless, and today there are about 250. The Catholic Church is considering Dorothy Day for sainthood.

REVOLUTION OF THE HEART: THE DOROTHY DAY STORY is entertaining and often inspiring. It contains interviews with Day’s granddaughter; her friend and biographer, Robert Ellsberg; actor Martin Sheen, who played Peter Maurin in a 1996 movie about Dorothy Day; leftist Christian activist Jim Wallis; and, conservative Cardinal Dolan of New York. The movie stresses Dorothy Day’s concern for the poor and the “oppressed,” but remains noncommittal regarding her stance against all war.

REVOLUTION OF THE HEART sheds light on a woman who impacted many people and continues to make an impact this day. It promotes Day’s Christian approach to taking care of the poor, which centered on private charity, brotherly love and volunteer work rather than big government social programs.

In light of this, it’s perplexing why the filmmakers chose to include remarks about Day from the Rev. Jim Wallis. Wallis is a big government leftist who frequently berates and slanders those who oppose the expansion of government-run welfare programs, education programs and healthcare programs. Day herself, however, was an advocate of the Catholic theories of personalism and distributism. Personalism is the belief that each individual person should focus on what he himself can do to help others. Distributism is the economic theory that wealth, private property and power should be widely distributed instead of concentrated. Though it supports private property, a free market and no social welfare programs, it also supports government action to ensure that economic activity is as decentralized as possible. REVOLUTION OF THE HEART touches briefly on these ideas, in a general way, but it could have used a more in-depth discussion and information regarding these theories and how Day put them into action.

Sadly, though Day eventually opposed communism and socialism when she became a Catholic and founded The Catholic Worker movement, she refused, or at least neglected, to harshly criticize communist and socialist leaders, even when they became leaders of totalitarian, murderous regimes like the Soviet Union and Cuba. In fact, during a visit to the Kremlin in Moscow in 1971, she was moved to see a couple of her American communist friends and colleagues from her early years on the Kremlin Wall. Regrettably, the documentary is silent on Day’s own silence on the horrors of international communism, which heavily influenced the anti-nuclear protests and the Anti-Vietnam War protests of which she took a part in the 1950s and 1960s.

That said, the focus of REVOLUTION OF THE HEART is how Dorothy’s Day’s Christian faith, expressing itself through brotherly love, animated her concern for workers, homeless people, the poor, social justice, and the violence that comes from war.

MOVIEGUIDE® advises caution for older children. It also encourages readers to explore more fully how the Bible and Christianity should influence our views on society, the family, morality, and economic and political issues. A good beginning is THE CULTURE-WISE FAMILY by MOVIEGUIDE® Publisher Dr. Ted Baehr and legendary entertainer Pat Boone.