"Love for Others Overcomes Fear" 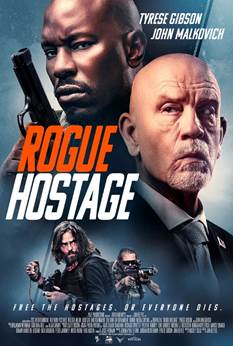 ROGUE HOSTAGE follows Kyle Snowden, a single father and former Marine who works for Child Protective Services. After Kyle and his female colleague rescue a young boy from an abusive father, the trio stops at the grand opening of a store owned by Kyle’s stepfather, Congressman Nelson. Kyle struggles with PTSD, so his stepfather was watching Kyle’s daughter. Not everyone is a fan of Nelson, and a group of domestic terrorists burst in and hold everyone hostage. The leader wants to kill Nelson, but he wants to make a statement by forcing Nelson to confess his guilt about a previous scandal. After Nelson’s bodyguard is shot, the fate of everyone rests in Kyle’s hands.

ROGUE HOSTAGE is a thrilling movie with plenty of jeopardy. It has moments of faith at the beginning, but they are undermined by strong foul language and violence. By the end, the elements of faith are nowhere to be seen. Instead, dishonesty, stealing and a lesbian relationship are championed. However, the former Marine saves people, stops the gunmen and is heroic. MOVIEGUIDE® advises extreme caution for ROGUE HOSTAGE.

(B, P, C, Pa, PCPC, HoHo, Fe, LL, VVV, SS, AA, M):
Dominant Worldview and Other Worldview Content/Elements:
Light moral, patriotic worldview where a father and a former Marine suffering from PTSD is a hero who tries to stop men holding people hostage, including his daughter (his love for others overcomes his fears), one prayer is said early in the movie, but that’s all, marred by a weird ending where an act of dishonesty and stealing ends the movie plus some strong politically correct, pro-homosexual content where a lesbian couple’s relationship takes center stage and is championed at the end, and there are some light feminist elements
Foul Language:
11 obscenities (including three “f” words), two or three strong profanities, and two light profanities
Violence:
Violence and jeopardy throughout, multiple gunshots, depictions of PTSD, several fatal gunshots to the chest and head with blood, a man is stabbed in the neck by a skewer and killed, a man is severely burned by a makeshift Molotov cocktail
Sex:
Lesbian couple shares several kisses on screen
Nudity:
No nudity Alcohol Use/Abuse: A man suffering from PTSD is briefly shown drinking and drunk
Smoking and/or Drug Use and Abuse:
No smoking or drugs; and,
Miscellaneous Immorality:
The scenes depicting PTSD can be intense, and some characters are morally inconsistent.

ROGUE HOSTAGE stars John Malkovitch and Tyrese Gibson in a new action thriller about a group of innocent customers and employees held hostage at the opening of a new chain store.

The movie opens with a flashback nightmare, revealing that Kyle Snowden was Marine. The mission in the nightmare goes south, but Snowden wakes up before the audience learns the outcome.

Fast forward to present day. Snowden and his daughter pray over a meal. Snowden’s stepfather, Congressman Sam Nelson, is prepping for the grand opening of his newest big-box store. Due to his PTSD, Snowden he is struggling to be a good father to his daughter. His daughter is set to spend the night at her grandfather’s the night before the store opening.

The next day Snowden is at his job for Child Protection Services. He and Clove, his co-worker, are responding to a report of domestic violence. They pick up an abused child named Manny. On their way back, Clove convinces Snowden to visit his daughter and stepfather, Sam, at the new store’s grand opening.

As they pull into the parking lot, Clove says she recognizes someone from high school but believes she’s seeing things. As the employees and Sam prepare for the opening, things take a turn for the worst. A group of armed men lock everyone inside the store and claim they want to send a message by broadcasting the killing of the Snowden’s stepfather, Sam Nelson. Snowden must face his fears as the fate of his daughter, his stepfather, an innocent group of people, and the store is in his hands.

ROGUE HOSTAGE is a thrilling action movie with plenty of jeopardy. Although it has brief moments of faith like prayer at the beginning of the movie, they are quickly undermined by some strong foul language and violence. By the end of the movie, elements of faith are nowhere to be seen. Instead, dishonesty, stealing and a lesbian relationship are championed. However, the former Marine saves people, stops the gunmen and is heroic. MOVIEGUIDE® advises extreme caution for ROGUE HOSTAGE.