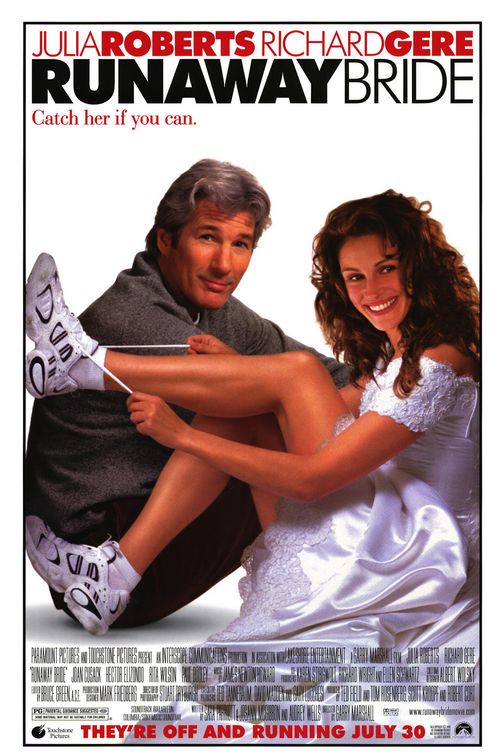 RUNAWAY BRIDE, the re-teaming of Julia Roberts and Richard Gere, is a triumph. Shockingly clean by Hollywood standards, there are only 2 mild obscenities and some off-color humor, but no nudity or sexual immorality. In a movie about a woman who keeps running the wrong way down the aisle, this movie resists the temptation to salt the scenes with sex and instead relies on the story to keep the audience hooked. The movie received a PG rating because there are a couple of slightly off-color jokes.

RUNAWAY BRIDE, the re-teaming of Julia Roberts and Richard Gere, is a triumph not only in sheer entertainment but in the manner in which it does so. Clean by Hollywood standards, there are only 2 mild obscenities and some off-color humor, but no nudity or sexual immorality. In a movie about a woman who keeps running the wrong way down the aisle, this movie resists the temptation to salt the scenes with sex and instead relies on the story to keep the audience hooked. The movie received a PG rating because there are a couple of slightly vulgar references relayed in a lighthearted manner by a grandmother who asks her friend to cover her ears when she says them.

Yes, Julia Roberts as Maggie Carpenter plays her standard role where she smiles so big and cute that the audience just wants to hug her. Richard Gere, similarly, doesn’t surprise us either with his portrayal of Ike Graham, the columnist, who is strong and manly and rescues the damsel in distress. (There are no thespian revelations here.) However, the story, about a woman who’s so nice and so sweet that she takes on the characteristics of the man she’s dating without discovering herself is fresh. Maggie inspires men to the point of matrimony but can’t seem to express herself in the relationship, to the point of only being able to turn and run at the final moment.

Ike, a columnist facing a writing block hours before a deadline, grabs the story from a man at a bar and embellishes it. Maggie, who’s happily engaged for the fourth time, is furious at the article. After all, there are several facts that are not quite right. She retaliates by writing a letter to the editor, Ellie (Rita Wilson), who happens to be Ike’s ex-wife, and succeeds in getting him fired. A friend of Ike’s named Fisher, played with panache by Hector Elizondo, suggests that Ike follow the story to its end. If Maggie does bolt for a fourth time, then Fisher, who’s also now married to Ellie, will make it a cover story, and Ike will be vindicated. Even if he didn’t get all the facts straight, Ike’s premise that Maggie is an example of a man-eating woman will be amply demonstrated.

So Ike takes a trip to Hale, Maggie’s small town, and the dance begins. Ike has both the charm and the moxie to investigate his way through Maggie’s life with aplomb. Maggie disdains him, in her own loveable way. Because he’s writing a story on her wedding, and she’s trying to foil him, they slowly discover each other. Eventually, the audience learns that Maggie is afraid to tie the knot with a man because her father was an alcoholic.

Once the viewer gets used to its sweet, cutesy tone, this movie warms the heart. It’s a romantic comedy in the tradition of the old Hollywood romances where the protagonists fall in love because of each other, not out of lust and circumstance. At one point, Ike says, “There’s a difference between finding the right one and attraction.”

Thus, RUNAWAY BRIDE celebrates rather than denigrates the institution of marriage. When Ike and Maggie resolve their differences, rather than hopping in bed, they hop on a horse with a bridal gown and tux.

RUNAWAY BRIDE has a romantic, slightly humanist worldview in that both Maggie and Ike use their own strength and emotions to learn from each other in order to mature enough to eventually enable their coming together. It does mention faith, however. Without trivializing it, one of Maggie’s former fiancées is now a sincere Catholic priest, not a Hollywood stereotype. Thus, Father Brian (Donald Loque) is neither a sex-starved pedophile, a rigid legalist or a serial killer, but rather a humble, well adjusted man of the cloth who tells Maggie that it was good they never married because, “This was where I was meant to be. I am happy now with God.” While Maggie only sits in the confessional both to talk to Brian and neither she nor Ike make mention of their own faith in God, Father Brian does. He is both content and a man of integrity. He says before Maggie leaves, “Promise me, if you ever do become a Catholic, you’ll go to Father Patrick for confession.”

All in all, RUNAWAY BRIDE plays it straight down the middle in a predictable, but warm, light, clean, romantic way, which should make it a big hit.