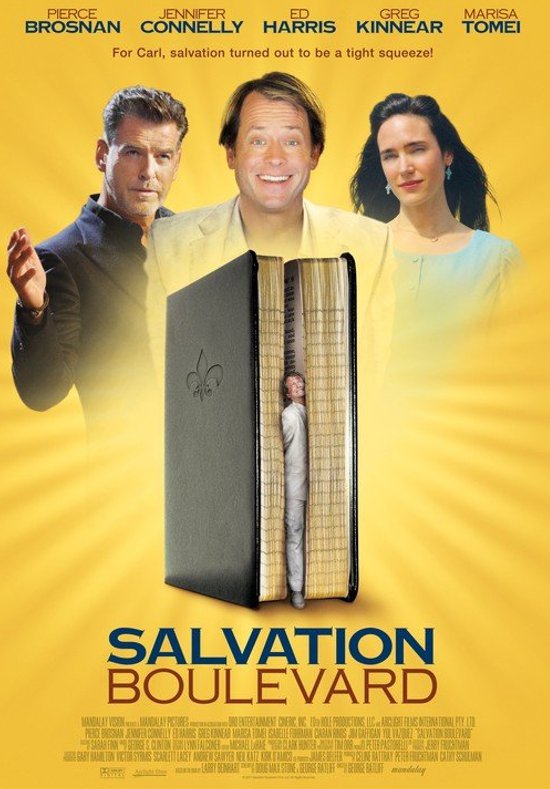 SALVATION BOULEVARD, a bigoted satire, stars Pierce Brosnan as megachurch televangelist Dan Day. Day accidentally shoots a famous atheist after engaging in a public and televised debate with him. After the debate, the atheist even admitted that Day was the first minister he ever felt matched his intellect in a debate on faith and belief in God. After Day shoots Blaylock, believing he’s dead, but actually just putting him in a short-term coma, he tries to cover up the incident. Carl, one of Day’s top followers was there at the shooting. Things start to spin out of control when another follower kidnaps Carl and threatens to kill him if he doesn’t clear the pastor’s name.

After the first half hour shows the pastor successfully debate the atheist, SALVATION BOULEVARD starts to unravel. By halfway, the movie’s tone becomes more shrill, manic and over-the-top. Almost every character starts behaving more manically and less realistically until the movie loses all plausibility and becomes a disappointing case of “what might have been.” SALVATION BOULEVARD will please neither believers nor non-believers and includes plenty of foul language and an endorsement of marijuana use.

(HH, AbAb, C, B, LLL, VV, S, A, DD, MMM) Strong humanist, ultimately Anti-Christian worldview in satire about a televangelist at a megachurch who accidentally shoots an atheist debate opponent and sets off a downward spiral of events when he attempts to cover up the killing, with some occasional light Christian, biblical elements; 15 obscenities (mostly variations of the “f” word with a couple of “s” words) and about 15 profanities, including a few GDs; strong comedic violence includes the point-blank yet accidental shooting of an atheist by a Christian minister, who first tries to cover it up to look as a suicide and later attempts to dupe a mentally addled congregant to take the blame for the shooting, conflicted man is kidnapped and bound to a chair and threatened with death by the unhinged devotee, man’s captors accidentally set aflame, lightning sets man free from handcuffs; some sexual implications including man leaves wife and it’s implied that televangelist’s charm with women could get him illicit sex but he restrains himself; no nudity; casual alcohol use in a few scenes, including the televangelist sipping whiskey with his atheist debate opponent; one lead character smokes marijuana joints two or three times, including while driving in one scene; and, lying, numerous attempts at cover-ups of an accidental shooting and other events, comically deranged member of the minister’s “team” keeps getting more comically unhinged as the movie continues and engages in kidnapping, hostage-holding and death threats, satire of hypocrisy among Christians, and movie shows televangelist as a basically sincere man who got scared and let his sinful side take over.

The bigoted movie SALVATION BOULEVARD tries to be a broad satire of Christianity and televangelism, but after the first half hour ends with a jaw-dropping twist, it falls apart tonally and ultimately should prove unsatisfying for even secular viewers.

The movie stars Pierce Brosnan as a megachurch televangelist named Dan Day. Day accidentally shoots a famous atheist after engaging in a public and televised debate with him. After the debate, the atheist even admitted that Day was the first minister he ever felt matched his intellect in a debate on faith and belief in God.

The initial debate is well written and played, raising hopes that SALVATION BOULEVARD will prove to be a movie that discerning viewers could enjoy, but after Day shoots Blaylock, believing he’s dead, but actually just putting him in a short-term coma, he tries to cover up the incident until a top congregant named Carl sneaks off to call the police about the incident. Even these early moments work as a mix of tension and somewhat dark satire. By halfway in the movie, however, the movie’s tone becomes more shrill, manic and over-the-top, damaging the movie for believers and non-believers alike and leaving viewers with a disappointed feeling of mediocrity.

Along the way, Carl is pulled in multiple directions, between wanting to alert the authorities yet protect his pastor, and between maintaining his new godly life with an often-hysterical and always simple-minded wife, or running away with a pretty guard and leaping back into his old life as a Deadhead, a Grateful Dead fan. As he’s taken hostage by Day’s deranged right-hand man, Jerry, and threatened if he doesn’t lie to clear Day’s name in the shooting, practically everyone involved in the story starts behaving more manically and less realistically until the movie loses all plausibility and becomes a disappointing case of “what might have been.”

[SPOILERS FOLLOW] Ultimately, Day is shot by an enemy real-estate developer and winds up with a short prison term, Carl leaves the church to follow the Grateful Dead again and leaves his wife to live with the guard, and a female church member is destined to remain flagrantly fundamentalist while it’s revealed that her daughter fled home when she turned 18.

SALVATION BOULEVARD is the creation of writer-director George Ratliff, who admits having been raised in an evangelical home, but that he has rejected organized religion as an adult. As such, his agenda is blatantly clear. This is a movie that most discerning viewers should avoid, both as a middling attack on faith and an outright disappointment comically. Its simultaneous limited release in theatres and presence in On Demand on Cable TV at least helps ensure the movie won’t reach and affect negatively as many people as other wider releases with foul content.