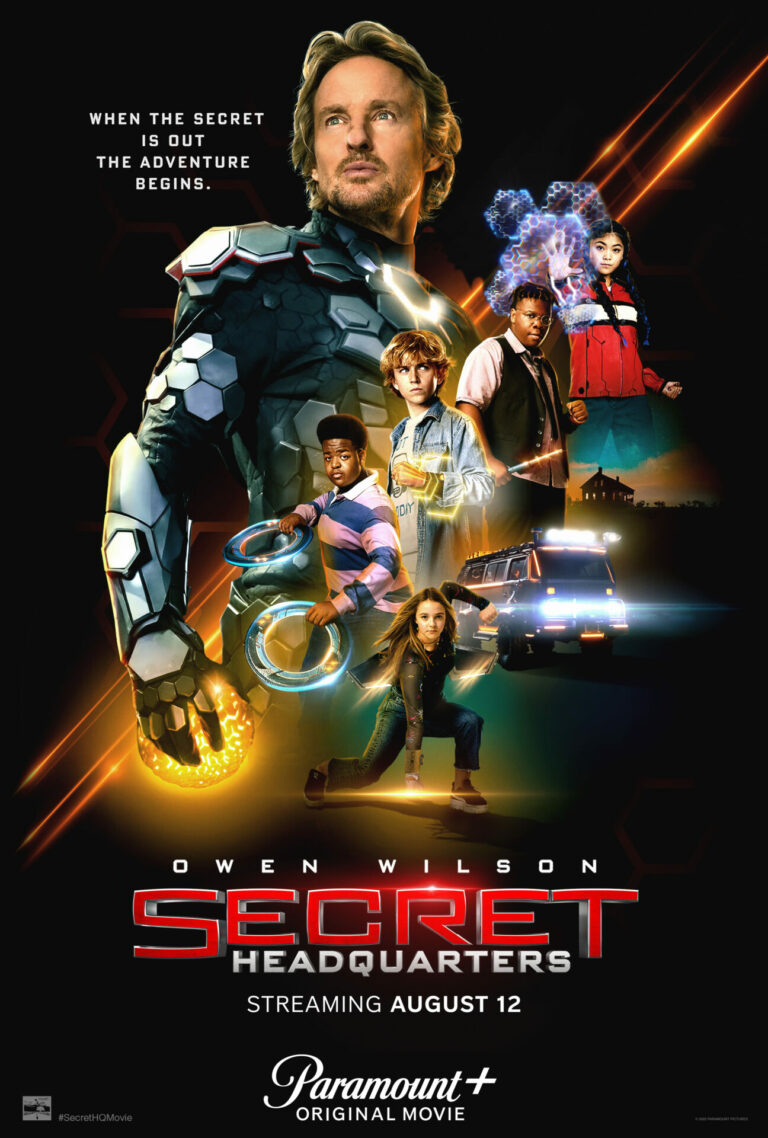 SECRET HEADQUARTERS is a slightly convoluted, teenage, humorous superhero movie on Paramount Plus. The movie stars Owen Wilson as Jack, a family man with a wife and a young son. During a camping outing, Jack finds an alien object, which turns him into a superhero who can do many good deeds. However, he keeps his superpowers secret from his family, and, years later, his super exploits have alienated both his wife, who separated from him, and his 13-year-old son, Charlie. When Charlie and his friends find Jack’s secret headquarters, their discovery alerts a mad industrialist who wants to use Jack’s power source for his own evil plans.

SECRET HEADQUARTERS has a weak, sightly convoluted script and too much light foul language. The violence is often very cartoonish and sort of funny, appropriate to a movie for teenagers. There are some serious moments of violence, such as a wound being cauterized. Sadly, there are many lightweight obscenities, with several OMGs and several references to bodily functions. That said, SECRET HEADQUARTERS is somewhat enjoyable and has a light moral worldview showing a family being restored.

(B, LLL, VV, S, M):
Dominant Worldview and Other Worldview Content/Elements:
Light moral worldview stressing that a father needed to spend more time with his son, showing a family being restored, and indicating a man was chosen to save the world not in general but by rescuing people and stopping bombs from going off and other Superman-type tasks
Foul Language:
6 light profanities such as OMG, and around 13 light obscenities and vulgarities and some bodily function references including about urination, as well as one “Thank God”
Violence:
Lots of action violence, most of it very cartoonish, one serious wound being cauterized by a knife, man is blown into another dimension and is yelling for help from that dimension, young teenagers fight with villains, and villains threaten to kill children, villain kills his sidekick in order to remove evidence and witnesses
Sex:
Very light teenage kissing and discussion of kissing
Nudity:
No nudity
Alcohol Use:
No alcohol use
Smoking and/or Drug Use and Abuse:
No smoking or drugs; and,
Miscellaneous Immorality:
Lying but often called out and rebuked, teenage crushes, father hides secret identity from son.

SECRET HEADQUARTERS is a slightly convoluted, teenage, humorous superhero movie about a family man who finds an alien object, which turns him into a superhero who does many good deeds and which causes the government and an industrial leader named Argon to want to steal the object so they can use it for their own nefarious purposes. SECRET HEADQUARTERS has a weak script and too much light foul language, but it is somewhat enjoyable and has a light moral worldview showing a family being restored.

The movie opens with Jack, his wife, Lily, and their son, Charlie, camping out on Charlie’s birthday. The soundtrack communicates that an air force pilot named Irons is chasing a flying saucer. The pilot runs into the saucer, and they crash near Jack and his family. Jack runs to the crash and finds the pilot hanging from a tree but still alive. He gets him down, and they go to the saucer. A sphere emerges from the saucer, and Irons tries to grab it, but the sphere says, “Rejected,” and moves over to Jack and melds with him, turning him into a superhero, The Guard.

Years later, the news announces almost every day the wonderful, good deeds that Jack, the Guard, has done. However, his super exploits have alienated both his wife, who separated from him, and his son, because he never spends time with him. Lily drops Charlie off at Jack’s house in the woods for his 13th birthday. Charlie has a cynical attitude about his father, and his father gets a message he has another super deed to perform.

Jack tells Charlie to call his mother and have her pick him up. Instead, Charlie calls his friend, Berger, and his friend says they’ll have a party at Jack’s cabin. While fooling around in Jack’s office, Charlie causes a secret door to be exposed. One of his friends, Lizzie, figures out that the password is the date of Charlie’s birthday. They get into an elevator and go miles deep to Jack secret headquarters.

Meanwhile, Argon the wealthy industrialist is being interviewed on the news and says the world must find the Guard’s power source so it can be used for all mankind. The industrialist has his own secret room, where he has a team of criminals and the pilot Irons who crashed into the saucer searching for Jack’s headquarters and the power source.

When Charlie and his friends start using Jack’s secret room without turning on the signal blockers, the bad guys pinpoint the children with the power souce, and for the rest of the movie, the children fight the bad guys . So, the question is, will the children survive the mercenaries and their maniac boss?

SECRET HEADQUARTERS is produced by a good team, but the script is weak. The jeopardy doesn’t really start until the villains find the children. Then, it’s constant action with battles using advanced technological weapons found in Jack’s secret headquarters. The violence is often very cartoonish and sort of funny, appropriate to a movie for teenagers. There are some serious moments of violence, such as when Jack gets wounded and Irons the pilot, who’s now turned into a good guy, cauterizes Jack’s wound with a knife. Another intense moment is when the maniac villain shoots one of his henchmen to make sure there are no witnesses. Sadly, three’s a lot of lightweight obscenities, with several OMGs and several references to bodily functions. At the end, a teenage couple kisses, but another couple decides to wait.

Overall, SECRET HEADQUARTERS has a lot of promise, is somewhat enjoyable but not special. So, it’s three stars, Minus One.