SHADOW OF THE VAMPIRE 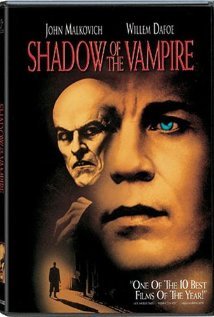 SHADOW OF THE VAMPIRE fictionalizes German director F.W. Murnau directing his silent movie horror classic NOSFERATU, an adaptation of Bram Stoker’s pro-Christian novel DRACULA. SHADOW OF THE VAMPIRE imagines that Murnau has employed a real vampire to play the title role. Murnau tells the cast and crew that he is simply “method” acting, but the shooting of each scene and some bizarre happenings convince them that they are in the presence of a true “monster.”

SHADOW OF THE VAMPIRE is an intimate view of filmmaking during the era of silent movies. In this type of filmmaking, the actors change their expressions at the command of the director, leading to sometimes silly overacting. In the same way, despite the horrific element of an actual monster “playing” the role of Dracula, this movie depicts both the humor and drama of its story. John Malkovich as Murnau doesn’t have to stretch at all playing the archetypal “mad scientist” role. Willem Dafoe as the monster is also convincing. Many scenes are almost comical due to the methods of silent filmmaking. Also, this uneven movie contains a skewed pagan worldview, nudity, foul language, some occult motifs, and other questionable elements.

SHADOW OF THE VAMPIRE is a perverse fictional look at the work of German director F.W. Murnau and his silent German movie, NOSFERATU, an adaptation of Bram Stoker’s pro-Christian novel DRACULA. Many consider NOSFERATU one of the greatest horror movies ever made. Many scenes in SHADOW are almost comical due to the methods of silent filmmaking. Furthermore, the movie contains a skewed worldview, nudity, foul language, drug use, and other questionable elements.

John Malkovich plays Murnau, who also directed another German silent classic, THE LAST LAUGH, and eventually emigrated to America, where he directed such acclaimed movies as 1927’s SUNRISE. Wanting the film to appear more as a real-life documentary than simply a story, Murnau has employed a true vampire, whom he calls “Max Schreck” (Willem Dafoe), as Count Dracula. He points out to the cast and crew that Max is simply “method” acting, but with the shooting of each scene and some bizarre happenings, the others come to realize that they are in the presence of a true “monster.”

The filming continues, however, as Murnau is extremely focused when it comes to his work. Even after the Count attacks the cameraman, Murnau quickly replaces him with Fritz Wagner (Cary Elwes of CRADLE WILL ROCK). Feeling slightly uneasy about the funding for the project is Murnau’s producer, Albin Grau (Udo Kier). He pressures Murnau but also pushes the project’s completion. Murnau then confronts the Count, who has apparently disregarded their ‘deal’ with his attacks on some of the cast and crew. Murnau attacks the Count, only to realize that he is dealing with an immortal and is virtually powerless.

It is after this confrontation that Albin later discovers Murnau has made a deal with the Count; that the Count will act in the movie in exchange for the leading lady, Greta (Catherine McCormack of BRAVEHEART). Soon the cast and crew become almost skeletal, and a mentally distraught Murnau works feverishly to complete his movie.

SHADOW OF THE VAMPIRE is an intimate view of filmmaking during the era of silent horror movies. In this type of filmmaking, the actors change their expressions at the command of the director, leading to sometimes silly overacting. In the same way, despite the horrific element of a monster “playing” the role of Dracula, this movie shows the humor as well as the drama of its story. Malkovich doesn’t have to stretch at all playing the archetypal “mad scientist” role. Dafoe is somewhat convincing, but his performance is spoiled by the sometimes goofy reactions of his character.

The elements surrounding the story of Dracula seem immortal in themselves. Not only is Murnau’s version a remake of the original story, but here viewers get to see the familiar tale all over again, although from an altogether different perspective. Regrettably, this uneven version also contains nudity, language and other questionable elements that only reveal the inability of this picture of the past to escape the ills of today.