YES, I WANT TO SUPPORT MOVIEGUIDE®!
Home
Reviews
New on Streaming and DVD 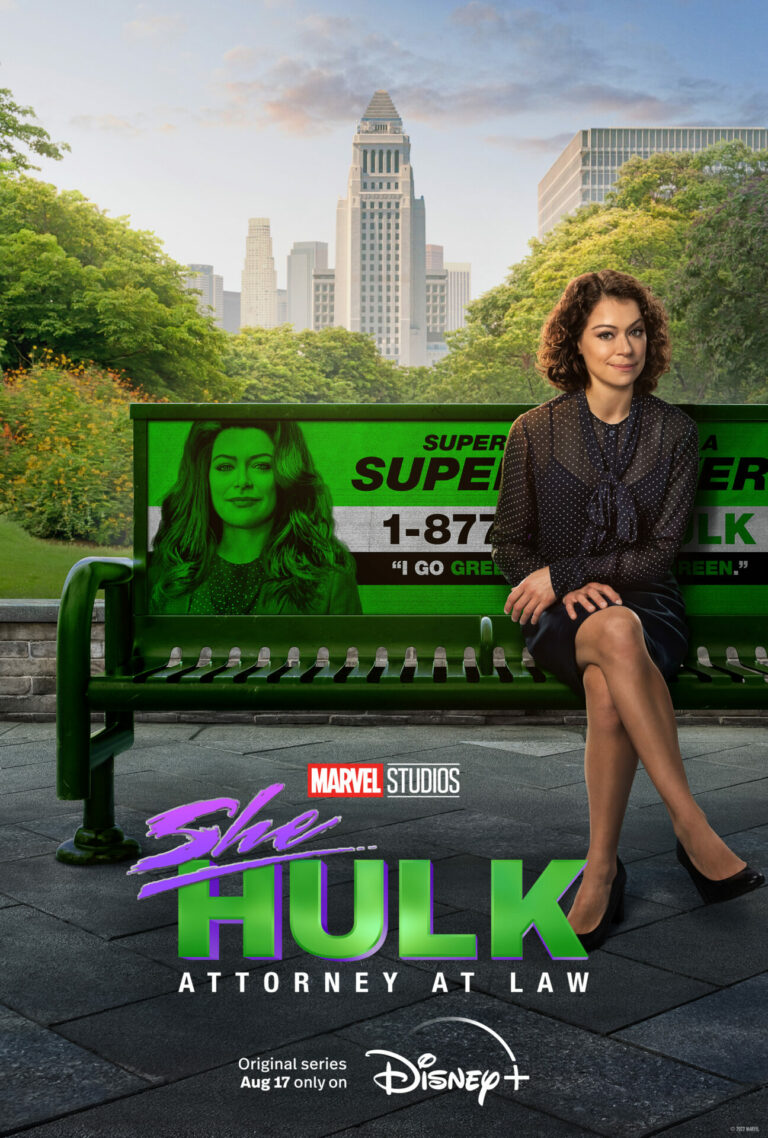 The first two episodes of SHE-HULK: ATTORNEY AT LAW set a comical tone for the series. Jennifer Walters, an up and coming deputy district attorney, is on a road trip with her cousin, Bruce Banner, when a car wreck results in Bruce’s Hulk blood entering Jennifer’s own bloodstream. Bruce tries to help her adjust to her new Hulk superpowers, but Jennifer resists. She’s anxious to get back to her legal career and hide her superpowers. This turns out to be much easier said than done.

The writing and special effects in the first two episodes of SHE-HULK are not up to usual Marvel standards. However, the humor is fun and enjoyable. Sadly, though, the first two episodes have a mixed pagan, eclectic worldview. For example, there are references to Hinduism and meditation, as well as some feminism. The non-Christian content is mixed with some moral, redemptive values where doing the right thing, repentance, forgiveness, second chances, and family are extolled. The first two episodes of SHE-HULK also have foul language, violence, innuendo, and alcohol abuse. MOVIEGUIDE® advises caution for older children.

(PaPa, FRFR, H, FeFe, BB, C, LL, VV, S, AA, M):
Dominant Worldview and Other Worldview Content/Elements:
Strong, somewhat mixed pagan worldview contains some false theological content (such as some references to Hinduism and meditation, plus a meditation technique is given a clinical, psychoanalytic, humanist spin in two lines of dialogue in Episode 1.1), some feminism elements, and some strong moral elements, with light redemptive values, where doing the right thing, family (woman gets good advice from her father in one touching scene), repentance, second chances, and forgiveness are extolled in multiple moments in both episodes, especially, though, in Episode 1.2
Foul Language:
Nine obscenities, one Jesus profanity, five light profanities and one obscene gesture in Episode 1.1, but no obscenities and only one light profanity in Episode 1.2
Violence:
Strong action violence in Episode 1.1 includes a car crashes and tumbles down a hill when a spaceship suddenly appears in the middle of a road, gamma-ray infected blood of one crash victim infects the bloody wound of another crash victim, She-Hulk destroys equipment when her cousin tests her anger-violence, She-Hulk and her cousin punch and throw one another around a rural estate in Mexico when they get angry with one another, title character fights and knocks unconscious a person with super powers who crashes into a courtroom, and there appears to be a cage match fight happening on a TV screen at the end of Episode 1.2
Sex:
No sex scenes in Episode 1.1 or 1.2, but there are two or so brief sexual comments and jokes in Episode 1.1, including a question about the possible sex life of another superhero, plus creepy men catcalling and almost stalk the title character outside of a bar, until she shows them that she’s the “SHE-HULK,” plus prisoner says in Episode 1.2 he has “seven soulmates” who have bought an estate for him and them when he gets paroled
Nudity:
No nudity
Alcohol Use:
A few scenes with bars and drinks in Episode 1.1, including one night of extremely heavy drinking as “hulk bodies metabolize alcohol at a superfast rate” so they could drink heavily and not get super drunk, which is labeled “all buzz and no barf,” and woman appears slightly drunk in a bar when she changes back to a human form after using her “Hulk” metabolism, and brief alcohol consumption in Episode 1.2 at another bar
Smoking and/or Drug Use and Abuse:
No smoking or drugs;
Miscellaneous Immorality:
Character seems to get jealous of his cousin when she seems to be handling a problem better than he did, and prisoner waiting parole hearing appears to have broken his promises to behave at end of Episode 1.2, which ends on a cliffhanger.

Jennifer Walters is on a road trip with her cousin, Bruce Banner, when they get into a tragic car crash. Of course, her first instinct is to try and save her cousin, resulting in his blood getting into her system. Since Bruce is the Hulk, his blood entering her bloodstream means Bruce will no longer be the only Hulk and Walters will no longer be a normal attorney.

Bruce and Jen embark on a journey together, so to speak, as Bruce tries to teach Jen everything about the Hulk that took him countless years to learn and master. Jen’s version of the Hulk seems to be a lot less complicated than what Bruce has endured. As the days pass, Jen is eager to get back home to her job and back in the courtroom.

Meanwhile, Bruce is frustrated that Jen doesn’t want to be a superhero and is trying so hard to ignore reality. Jen is under the assumption that she could just return to her normal life and hide her Hulk powers. Until a villain bursts into a courtroom, when Jen Hulks-up in order to defend helpless civilians. As a result, however, the judge declares a mistrial, despite the fact that Jen was winning the case.

Subsequently, Jen is fired from the District Attorney’s office, her secret is out for the world to see, and her life becomes all she didn’t want it to be. On the bright side, it actually becomes easier for Jen to come to terms with her new She-Hulk life once she can’t hide it anymore.

Things take a turn for the better when the head of the firm that got the judge to declare a mistrial offers Jen a job. However, he wants her She-Hulk persona to be the face of the company’s division for handling the cases of people with superpowers. Also, her first assignment is to handle the parole hearing of Emil Bronsky, aka The Abomination, the super soldier hired by the Army to kill The Hulk, her cousin, Bruce’s, alter ego.

How will Bruce feel about this? Also, will Jen learn to embrace her new She-Hulk role?

Going by Marvel standards, the SHE-HULK series is a little lacking. The writing is not entirely up to par with other Marvel content, and the CGI doesn’t seem to be consistent. As the series has continued in subsequent weeks, it’s become more like a regular television sitcom.

Aside from these things, the first two episodes still have a lot of humor. The female twist on Hulk follows Marvel comics and shows some women empowerment. The series keeps viewers entertained by wondering how things will play out. Overall, the series could have been a little better, but it’s entertaining regardless.

That said, the first two episodes of SHE-HULK: ATTORNEY AT LAW have an eclectic pagan worldview expressing a mixture of belief systems. Different characters mention being transformed spiritually, but not specifically in a Christian way. Two characters use the ‘Namaste’ Hindu greeting, and another character refers to the Earth as a Her. Sensual pleasures and material goods are evidently the unspoken main goals in life. The first two episodes of SHE-HULK also have an overarching feminist viewpoint. However, this Non-Christian content is combined with moral, redemptive values where repentance, forgiveness, family, second chances, and doing the right thing are extolled. For example, there’s a touching scene between the title character and her father. The first two episodes of SHE-HULK also have some foul language, violence and light innuendo. So, MOVIEGUIDE® advises caution for older children.