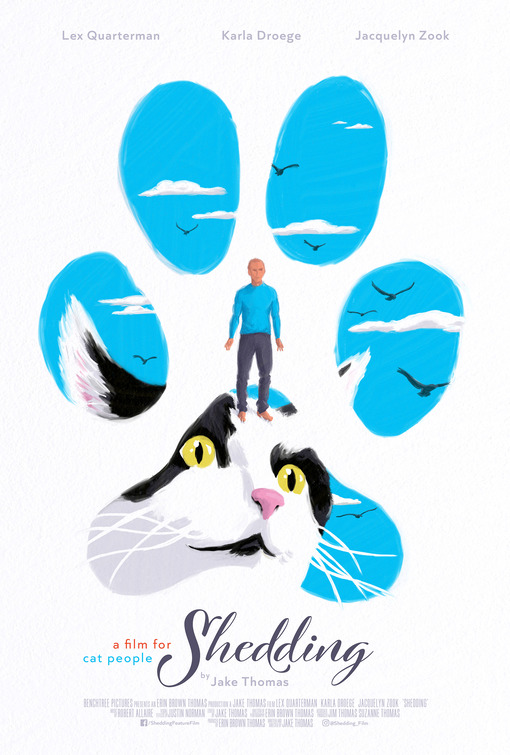 In SHEDDING, a bored house cat longs to explore the outside world. One day, he escapes his home after mysteriously changing into a young man. The outside world is strange to him, but he runs into a woman who has an attachment to him. She clothes him and cares for him as one of her own. When the woman’s daughter arrives home, she tells her mother to persist, because her son isn’t returning. In the confusion, the daughter lashes out at the young man, and he runs away. The daughter and her mother must learn how to overcome their crippling grief.

SHEDDING has an interesting concept but suffers from poor technical quality. The performances serve the story well, however. Also, the story explores grief and healing in a subtle, interesting way. Even so, that positive message is overwhelmed by awkward cinematography and an unsatisfying ending. Sadly, the story’s approach to healing, forgiveness and family is never elevated above a cheaply made student project. So, while MOVIEGUIDE® has no major cautions, the faulty execution in SHEDDING offers minimal moral connection for viewers.

(B, V, N, M):
Dominant Worldview and Other Worldview Content/Elements:
The movie’s worldview is not apparent, but the mystical elements of a human transforming into a cat serve a more moral worldview of how humans deal with loss and overcome it
Foul Language:
No foul Language
Violence:
Woman suffers from deep depression after the loss of her son, it is unclear whether it is attempted suicide or illness, but the woman shuts the door of her bathroom and collapses behind it
Sex:
No sex
Nudity:
When the cat first transforms the human form is presumed to be completely naked but only upper male nudity is seen, while roaming the streets a family stumbles across the naked man
Alcohol Use:
No alcohol
Smoking and/or Drug Use and Abuse:
No smoking or drugs; and,
Miscellaneous Immorality:
Some mild yelling.

SHEDDING is a unique fantasy, now streaming on Amazon and elsewhere, about a bored house cat who mysteriously changes into a young man and helps a mother and her daughter overcome grief over a dead family member. SHEDDING has an interesting concept, solid performances and little objectionable content, but it suffers heavily from poor technical quality.

The movie begins with a cat roaming around an empty house. The cat spends most of his time looking out a window at the trees and passersby. There’s no dialogue, but it’s clear the cat wants to explore outside when the homeowner takes out the trash and leaves the door ajar. The cat sees an opportunity to explore, but realizes it will be difficult to do as a cat.

On one of the cat’s people-watching sessions, he sees a frantic woman get into a car. There is a cool breeze, and his owner is gone. As the cat falls asleep, he dreams of running free in a field. The cat is interrupted by another cat in the house but soon falls asleep again.

To his surprise, the cat wakes up as a full grown human man. At first, the young man tries to continue his life as a cat, but soon realizes his new body allows him to go outside. The man decides to explore the world, but he’s met with an unfamiliar world. He can’t climb trees as well as he once could, and people seem to avoid him because he’s completely naked. The man learns to run and hides from the people he sees. However, a woman sees him and offers him a blanket. The woman takes the man home, clothes him and seems to have a connection to him.

After eating ice cream like a cat, the woman seems slightly weirded out, but eventually joins the man and starts to treat him like her son. She takes him on an adventure, and the duo visits the beach, city and park. However, when the daughter arrives home, she’s overwhelmed and lashes out at the young man. The daughter and mother must learn together how to heal and overcome their crippling grief.

SHEDDING has an interesting concept but suffers heavily from poor technical quality. The performances serve the story well. The story does explore grief and healing in a subtle way that is overwhelmed by awkward cinematography and an unsatisfactory ending. Unfortunately, the story’s intellectual approach to the themes of healing, forgiveness and family is never elevated above a cheap student project with a compelling premise. In the end, while there are no major cautions, the faulty execution will offer little moral value for viewers.