"A Man Will Do Anything to Save His Family" 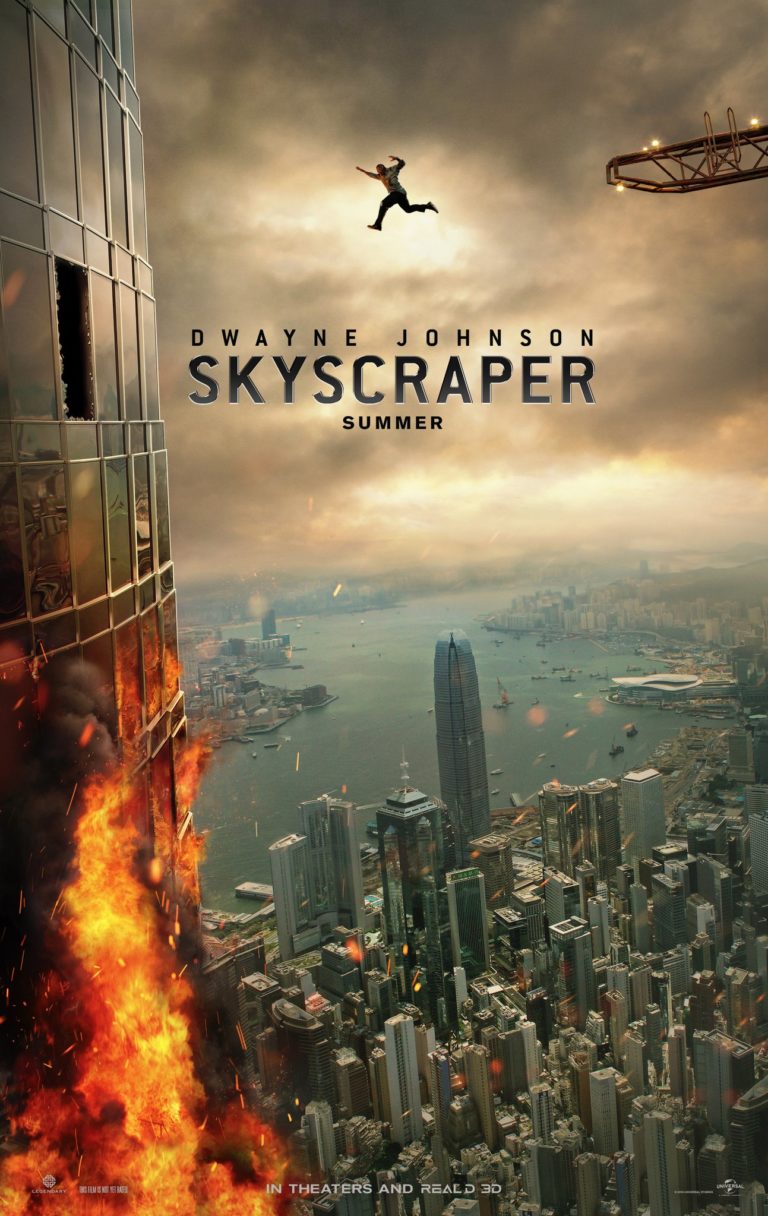 SKYSCRAPER is an action movie starring Dwayne Johnson as Will Sawyer, a security assessor for the tallest in the world, brand new skyscraper in Hong Kong. Will’s family has been living with him in the skyscraper as he’s been doing his assessing. Before he’s ready to approve the building, highly trained criminals steal Will’s security access and start a fire in the building with Will’s family inside. Will must do the impossible to get to his family, fighting criminals and fire all along the way. Can he save them and also find out what the criminals are after?

SKYSCRAPER takes inspiration from movies like THE TOWERING INFERNO and the first DIE HARD. The movie is undeniably tense and has incredible stunts and action sequences. Dwayne Johnson’s charisma allows audiences to suspend their disbelief, while also staying invested in the outcome of the characters. The movie does suffer from weak writing, however. Positively, SKYSCRAPER has a moral worldview with Will doing everything he can to save his wife and children, and it also honors veterans. A strong caution is advised due to foul language.

(BB, PP, Cap, C, LL, VV, N, A, M)
Dominant Worldview and Other Worldview Content/Elements:
Very strong moral worldview as main character goes to incredible lengths to save his wife and children, the entire family exudes bravery, courage, selflessness, and love for each other; a couple “thank God” mentions, a reference to the tower of babel; strong patriotic worldview as the whole movie honors veterans who have been severely injured and have lost limbs; light pro-capitalist elements as the skyscrapers owner is portrayed in a positive light;
Foul Language:
Ten obscenities (including a few s-words and one f-word), and six profanities (mostly OMG, but one strong JC);
Violence:
Moderate action violence, with very brutal fight scenes with punching, kicking, throwing and using random objects as fighting objects, several shootouts with many people getting shot, people are also cut and stabbed at times, a man blows himself up with a suicide bomb, killing his son with him, man pulls a shrapnel from his chest, many explosions, dangerous stunts, and perilous moments involving a raging fire;
Sex:
No sexual content;
Nudity:
Upper male nudity, and woman wears a top that sometimes reveals cleavage;
Alcohol Use:
Light drinking;
Smoking and/or Drug Use and Abuse:
No smoking or drug use;
Miscellaneous Immorality:
Betrayal, and a man harms his family.

SKYSCRAPER is an action movie starring Dwayne Johnson as a security assessor who has to fight off dangerous criminals, police officers and a raging fire in a skyscraper to save his wife and two children.

The movie begins 10 years prior when Will (Dwayne Johnson) was part of the FBI Hostage Rescue Team. One fateful night while rescuing a family being held hostage, Will is injured when the kidnapper blows up a bomb. Will loses his leg, but in the hospital, he meets Sarah, a surgeon, who saves him, and whom he eventually marries.

Ten years later, Will is working as a security assessor, and he and Sarah have a sweet boy and girl. Will manages thanks to a prosthetic leg.

In Hong-Kong, Will Sayer is preparing to give his security analysis of the tallest structure in the world because an old FBI friend, Ben, went to bat for him to get the job. Will gives his presentation to the building’s visionary Zhao Min Zhi, a billionaire entrepreneur and reveals that the building is the safest structure in the world, he just has to inspect the offsite security site before they can open the residential area to the public, the residential area wherein Will’s family has already been living. Will is given a tablet that gives him alone access to the entire buildings security. Not long after, it’s revealed that Ben is working for someone that’s going to steal the tablet and the security access away from Will.

While Ben is trying to get the tablet from Will, highly trained soldiers invade the skyscraper and light it on fire with Will’s family inside. Ben is killed in their tussle, but the people he’s working for immediately find Will and take the tablet from him. With the tablet, they’re able to break into the offsite security location and turn off all fire safety protocol, allowing the fire to start spreading to higher levels where both Will’s family is, and the owner of the building. Will is stuck on the outside with no ways to get to his family, and the police think he’s the mastermind behind the attack.

Can Will get to his family and save them? What does the building’s owner have that the criminals want so badly?

SKYSCRAPER takes inspiration from movies like THE TOWERING INFERNO and the first DIE HARD, though it’s softer, more heartfelt approach to the genre is more in line with the 2012 Korean disaster movie THE TOWER. SKYSCRAPER is undeniably tense and has incredible stunts and action sequences. Dwayne Johnson’s charisma allows audiences to suspend a level of disbelief, while also staying invested in the outcome of the characters.

The movie does suffer from weak writing, however. The dialogue includes a bit too much exposition, and worst of all, the movie always becomes less interesting once people start talking, which shouldn’t be the case. There are also some glaring plot holes too (like the fact that the entire security system is controlled on one tablet).

Positively, SKYSCRAPER has a moral worldview with Will doing everything he can to save his wife and children, and his wife Sarah never giving up on her husband or children. The movie also honors our veterans who have suffered from terrible injuries and lost limbs. SKYSCRAPER also surprisingly celebrates the entrepreneurial spirit and capitalist achievement.

On the negative side, SKYSCRAPER has a moderate amount of foul language, including one f-word, and some intense action violence. Because of this, a strong caution is advised.