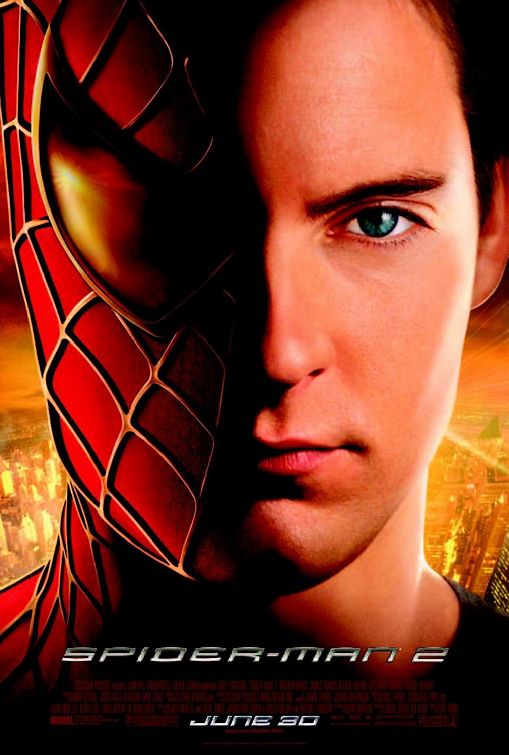 SPIDER-MAN 2 is terrifically entertaining, with lots of action and amazing special effects, plus a few unexpected plot twists. The story opens where the first movie left off, with Peter Parker, a.k.a. Spider-Man, ruminating about his relationship with the beautiful M.J. Although he’s decided to give up his love for her in order to protect her from Spider-Man’s evil enemies, his crime-fighting life is hurting their friendship, not to mention hurting his college studies and getting him fired from his pizza delivery job. These personal problems start affecting his superpowers, just when a new awesome villain, a scientist with evil mechanical arms attached to his back nicknamed Doc Ock for Doctor Octopus, begins terrorizing the city.

Director Sam Raimi does an excellent job juggling complex characters, their personal situations, and heart-pounding action scenes. The actors do a super job portraying the relationships and emotional connections between their characters. Like its predecessor, SPIDER-MAN 2 has a very strong Christian worldview with positive moral lessons, as well as some visual metaphors pointing to Jesus. If you like thrilling, heartfelt action movies with redemptive values, then SPIDER-MAN 2 is your best ticket to cinematic bliss this year.

(CCC, BBB, Ro, L, VV, N, A, D, M) Very strong Christian worldview about heroism and good versus evil with very strong biblical morality victorious and very strong visual elements metaphorically referring to Jesus Christ’s sacrifice on the Cross, the Resurrection, the disciples of Christ, and the crown of thorns in the Christ story, as well as some minor Romantic elements where people succumb to their emotions; five light obscenities and two light exclamatory profanities, and character says, “Lord knows kids need a hero”; lots of strong, sometimes intense, action violence including fusion reactor breaks out of containment and attracts metal objects and steel which endanger people, mechanical arms go out of control and grab and slam and strangle and hurt people and dangle them over heights before tossing them down (more gruesome violence here is implied rather than depicted), hero fights criminals and villain with deadly and long mechanical arms, hero shoots sticky strings of web to grab falling people and save them, big fight on top of speeding train, lives of train passengers endangered by runaway train, scenes of hero in great pain, people fall from great heights, implied death by flying glass, man rescues child from burning building, scary hospital scene where mechanical arms go berserk attacking doctors and nurses, and villain flings objects at hero; no sex; upper male nudity and young woman’s midriff shown; alcohol shown or implied; brief smoking references, but not by hero or heroines; and, villains do bad things such as kidnapping and threatening hero’s vulnerable elderly aunt and heroine, boss mistreats workers, and two characters imagine talking with two people who are dead, which may confuse children and some adults.

The best action movies are those which not only entertain but are also profound contemplations on issues of morality, and sometimes on the nature of heroism. They also have a great charismatic villain (sometimes two such villains), who presents a real physical and mental challenge to the hero. A little humor doesn’t hurt.

SPIDER-MAN 2, the sequel to one of the biggest blockbuster movies of all time, has all these things and more besides. It’s an intelligent, passionate action movie with something for everyone, young and old alike.

The movie picks up where the first movie left off. Peter Parker, a.k.a. Spider-Man, is still pining for M.J., even though he’s decided to give up his love for her in order to protect her from Spider-Man’s evil enemies. Peter’s life of fighting crime, however, is ruining his friendship with her, as well as his friendship with super-rich Harry Osborn. The Spider-Man persona is also hurting his college studies, not to mention causing his boss at a pizza delivery joint to fire Peter.

Meanwhile, to help Peter get back in the good graces of his science professor, Harry gets Peter an interview with Dr. Otto Octavius, a kindly, but intense, scientist. Otto is working on a method of creating and marketing fusion power for the company Harry inherited from his late father, who happened to be the evil Green Goblin whom Spider-Man had to kill in the first movie. Peter has doubts about Otto’s experiment, but he and Peter hit it off. Dr. Octavius and his wife even offer a word of advice about love to Peter, that you have to share the love inside you, or else emotionally and spiritually implode.

Just as Peter suspects, Otto’s experiment goes awry. The fusion energy, which appears as a tiny sun, becomes a powerful magnet in the room, with pieces of metal and metallicized glass hurtling toward it. Long mechanical arms powered by the energy and attached to Otto’s back start going berserk. When people try to detach the arms, the arms strike back. Finally, the computer chip protecting Otto’s brain from the artificial intelligence of the mechanical arms breaks off, and only Spider-Man is able to shut down the experiment and turn off the deadly artificial arms.

Later, the mechanical arms force Otto to escape from the hospital, killing several doctors and nurses. The computerized brain powering the arms takes over Otto’s mind, and he agrees with it that they must set up another experiment, but that they need to rob a bank to get the money for it.

Otto and the arms begin terrorizing the city, even endangering Peter’s Aunt May. Jameson, Peter’s mean boss at the newspaper where he sells action photos of Spider-Man, nicknames Otto “Doctor Octopus,” or Doc Ock for short.

Eventually, Peter must decide whether to keep fighting evil criminals like Doc Ock or quit being Spider-Man forever and restore sanity to his private life, hopefully reuniting with the beautiful M.J. Moreover, Peter’s contradictory emotions are tearing him up inside and he seems to be losing his super spider powers because of it.

SPIDER-MAN 2 is terrifically entertaining, with lots of action and amazing special effects, plus a few unexpected plot twists. That doesn’t stop director Sam Raimi from stopping every once in a while to take stock of his complex characters and their personal situations. This heightens the emotional power of the story, which is often very poignant. Raimi also has a little fun with Peter Parker’s angst and the fantasy of being a superhero. All the actors do a super job portraying the relationships and emotional connections between their characters.

Despite some intense action violence and very light foul language, SPIDER-MAN 2 has excellent lessons for older children and their parents. It teaches that people should use their talents, including their intelligence, for the good of all people and that self-sacrifice is a good thing. Otto’s wife tells Peter that her marriage is good because she and Otto work at it. Aunt May reminds Peter that people, especially children, need heroes and role models. These positive messages give added heartfelt depth to the story and characters.

Like its predecessor, SPIDER-MAN 2 has a very strong Christian worldview. Although God, Jesus Christ, and the Bible are not specifically mentioned in the dialogue, the story wraps its theme of self-sacrifice and heroism in explicit visual Christian metaphors. There are visual references to Jesus Christ’s suffering on the Cross, His death and resurrection, the crown of thorns that the Romans placed on Christ’s head, and the biblical theme of moral and spiritual discipleship.

The last metaphor or allegory is very interesting, because both Peter and his nemesis, Doc Ock, are torn between their negative or sinful side and their better natures. Doc Ock is a kindly, intelligent scientist who is seduced into evil by his ambitious pride and the evil mechanical voices in his head. Peter is seduced by his own selfish desires. Both must learn how to overcome their sinful natures and walk in a spirit of light rather than darkness. In that way, SPIDER-MAN 2 reflects the biblical passages in the Christian New Testament that talk about the battle between the two natures at war in the human spirit when someone accepts Jesus Christ as his savior and is born again. In this movie, Peter Parker and Spider-Man are not just a Christ figure, they are a symbol for all of us who are trying to be imitators of Christ for the benefit of our fellow man and the good of society. The movie skillfully blends this redemptive symbolism into its provocative theme on the nature of, and need for, sacrificial heroism.

If you like thrilling, redemptive action movies with lots of positive values and lots of heart, then SPIDER-MAN 2 is the best ticket to cinematic bliss so far this year. It stirringly raises the bar for what a summer action movie should be.