"This Isn’t Your Grandfather’s Rebel Alliance" 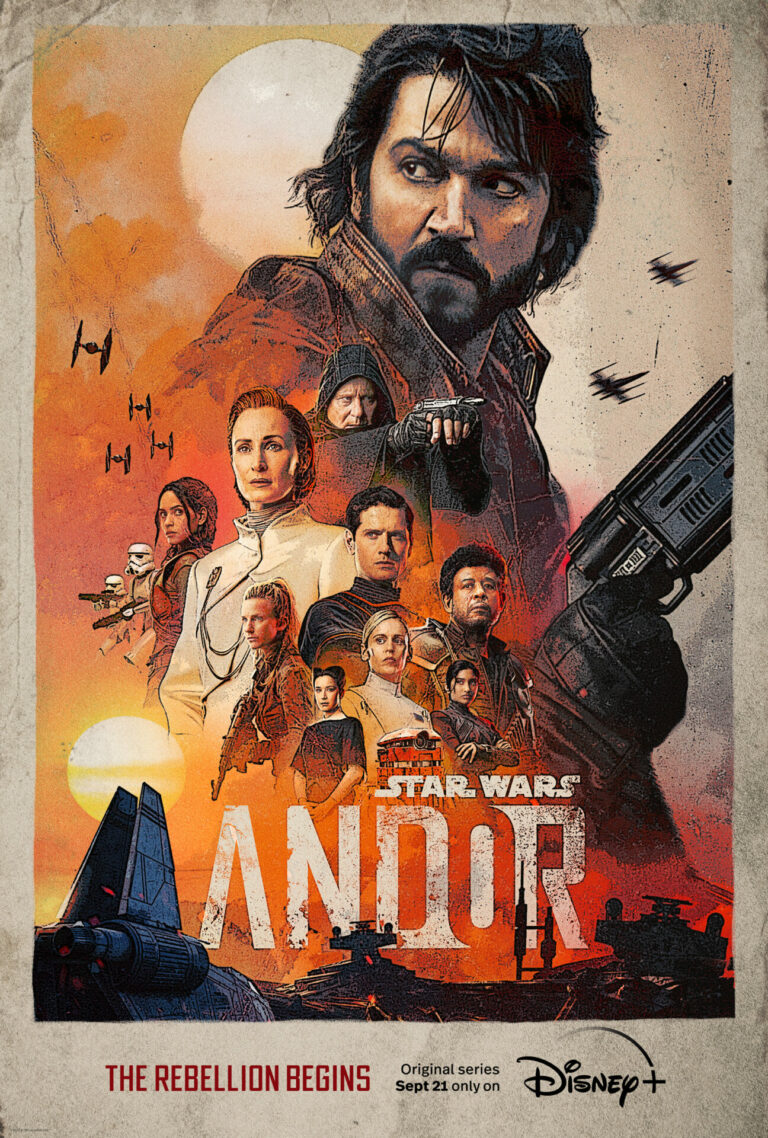 The first three episodes of STAR WARS: ANDOR, streaming on Disney Plus, tell how Capt. Andor of the STAR WARS movie ROGUE ONE gets involved with the Rebel Alliance. Andor is a thief living and working in the shadows. He travels to another planet to find his long-lost sister. However, two security guards accost him in an alley. During the fight, he accidentally kills one of them and then shoots the other one, a witness, dead. A young and inexperienced police inspector suspects Andor. He leads a police force to arrest him just when a spy from the Rebel Alliance is trying to recruit Andor.

The first two ANDOR episodes move slowly, but the third is action packed. The acting, art direction and editing are excellent. However, Andor is wanted for murder by the police. Also, the first three episodes have brief foul language, action violence and some innuendo. That said, they do promote an anti-totalitarian viewpoint and some pro-family values regarding Andor’s adoptive mother and missing sister. So, overall, MOVIEGUIDE® advises extreme caution for the first three episodes of STAR WARS: ANDOR.

(RoRo, FR, B, ACAC, L, VV, S, A, MM):
Dominant Worldview and Other Worldview Content/Elements:
Strong Romantic, antinomian worldview in three episodes where the Rebel Alliance hires a thief wanted for murder to help it fight against a totalitarian galactic empire run by an evil emperor, his right-hand man and vast military and police forces, so there’s some positive morality and anti-totalitarianism (the three episodes show the general populace’s sympathies lie against the Empire and in favor of the Rebel Alliance), but it’s morally compromised, and woman finds the title character as an orphaned teenager whom she takes under her wing and has become his adopted mother, so there’s some love and affection there, and the title character is looking for his long-lost sister whom he was forced to leave behind
Foul Language:
Brief foul language in two of three episodes, including no obscenities or profanities in Episode 1.1, one obscenity and zero profanities in Episode 1.2, and three obscenities (including one “s” word) and one light OG profanity in Episode 1.3
Violence:
Strong action violence includes title character is jumped in an alleyway by two off-duty security guards, one of the guards accidentally dies during the fight so the title character shoots the witness dead in cold blood, a military spaceship of some kind crashes, teenage scavengers investigates the crash site, two or three of the passengers are still alive and kill one teenager so the other teenagers use arrows to shoot one dead, and there’s a long gunfight between two men and Imperial police trying to arrest one of the men for murder, plus explosions occur during that fight
Sex:
In Episode One, title character visits a bar with dancing girls in a brothel where his long-lost sister was working and in Episode Two implied fornication occurs when a female friend of the title character sleeps with her boyfriend (another man) at boyfriend’s place (there’s some brief passionate kissing before they go into his bedroom)
Nudity:
No explicit nudity, but woman has a T-shirt and shorts on when she wakes up in her boyfriend’s bed (boyfriend is already dressed and up), and there’s some female dancing in the background at a bar located in a brothel (the dancers are clothed, so nothing salacious is shown)
Alcohol Use:
Some alcohol use
Smoking and/or Drug Use and Abuse:
No smoking or drugs; and,
Miscellaneous Immorality:
Implied thievery (title character appears to make a living by stealing things and being a scavenger who lives and works in the shadows), title character evades the police by shooting his way out because he’s wanted for murder, a man from a “Rebel Alliance” who wants to recruit the title character helps him evade the police by shooting their way out of a trap, the title character describes the Empire as so prideful, “fat” and “satisfied” that they’re vulnerable to clever thieves like him.

The first three episodes of the new STAR WARS series, ANDOR, on Disney+ tells how Capt. Cassian Andor of the STAR WARS movie ROGUE ONE first got involved with the Rebel Alliance. Though the first two ANDOR episodes are a little slow, the third episode is action packed, but the man who recruits Andor for the Rebel Alliance ignores the fact that Andor is wanted by the Empire’s police forces because he recently murdered a man in cold blood, which leads to a worldview that’s morally ambiguous, in a bad way.

The series opens with Andor visiting a brothel on a planet where his long-lost sister once worked. The hostess at the bar tells Ador his sister left two or three months ago, but a man at the bar takes a dislike to Andor. So, when Andor starts walking back to his little spaceship, the man and his friend accost Andor. Andor defends himself, but the man’s cohort accidentally dies in the fight. The man, who’s a security guard at the local mining facility, pleads with Andor not to kill him, but Andor shoots him dead in cold blood.

Andor returns to his current home planet, where he lives with the older woman who rescued him as a teenager when he and other feral teenagers discovered a crashed military spaceship and had to protect themselves from the surviving soldiers. Flashbacks in Episode Two and Three show that Andor had to leave his younger sister behind when the teenagers went to scavenge the downed spaceship. Apparently, the young people are all survivors of a large, old mining outpost that collapsed and was deemed unsalvageable by the Empire.

In the present, Andor asks a female mechanic named Bix to contact her rich, mysterious off-world contact who might buy a valuable Imperial navigation device that Andor stole from somewhere. She agrees.

Meanwhile, Karn, a young Deputy Inspector for the police on the planet where Andor killed the security guard, asks his boss, the Chief Inspector, for permission to investigate the guard’s murder. The Chief Inspector denies the request. He tells Karn to sweep the incident under the rug and make it look like an accident, because it will negatively affect the crime rate statistics for his department. The Chief Inspector wants no trouble with the Empire, which keeps a close eye on crime stats across the galaxy.

However, the guard’s murder upsets Karn’s sense of moral duty. He figures it’s not a good idea to let the unknown suspect get off scot free with the murder. So, when the Chief Inspector leaves to attend an important conference on another planet, Karn sets the wheels in motion to track down the suspect.

Karn’s investigation soon fingers Andor as the murderer. He also discovers the planet where Andor lives. Karn leads a troop of heavily armed police officers to nab Andor on the very day that Bix’s contact has agreed to arrive and talk to Andor about buying the stolen navigation device.

The first two episodes of ANDOR are somewhat engaging, but they move too slowly as the plot follows Andor’s life as a thief living in the shadows. The flashbacks to Andor’s past in the two episodes also take a while to get started. However, by the time of the third episode, the two stories become much more exciting and compelling. So, the first two episodes are three-stars in terms of entertainment quality, while the third episode is a definite four star. The acting, art direction and setting are uniformly good throughout the three episodes. Overall, MOVIEGUIDE® gives the first three episodes Three Stars.

The bigger problem with the first three episodes are the story’s moral issues. In the first act of Episode One, Andor decides to murder the security guard who witnessed the accidental death of his buddy during the altercation with Andor. The guard wants Andor to go with him to the police, where, he agrees, he will tell the police that his buddy’s death was an accident. However, since Andor is a thief working and living in the shadows, and has just stolen an important Imperial navigation device, he can’t afford to go to the police. So, despite the security guard’s pleas, Andor shoots the man down in cold blood.

Thus, although the police trying to capture Andor are working for the evil Empire, they are perfectly in the right when it comes to trying to hold Andor accountable for his crime. [SPOILER FOLLOWS] Also, when Bix’s contact arrives to negotiate with Andor for the price of the stolen navigation device, it turns out that the contact actually is a spy for the Rebel Alliance who’s interested in recruiting the talented Andor to work for the Alliance. The spy, who owns a fancy import business on the Empire’s capitol planet, doesn’t care as much about the device, nor does he care about Andor being wanted for murder.

Ultimately, therefore, although the first three episodes of STAR WARS: ANDOR contain some positive morality and anti-totalitarianism, they have a strong Romantic, antinomian worldview overall. To elaborate, the Rebel Alliance hires a thief wanted for murder to help it fight against the totalitarian galactic empire run by the evil emperor and the emperor’s vast military and police forces. The young Deputy Inspector is inexperienced and a bit naïve, but he’s right when he tells the people under him that they can’t let Andor get away with murdering the security guard, even though the guard acted like a jerk and wanted to beat up Andor and take his money.

All that said, the series contains two important, positive subplots. For example, the first three episodes introduce viewers to Andor’s adopted mother, Maarva. [SPOILERS FOLLOW] Maarva finds Andor as an orphaned teenager who’s in danger of being captured by the evil Empire. She helps Andor escape and takes him under her wing. So, there’s obviously some strong love and affection between them, even though Andor got separated from his younger sister. It also becomes clear that Andor has been searching for his sister for a long time. Thus, the morally uplifting moments in the first three episodes of ANDOR do contain some pro-family content. Hopefully, the other six episodes of Season One will develop these positive elements more strongly.

The first three episode also contain brief foul language, violence and some implied sexual immorality. For example, Andor visits a brothel to track down his sister. Also, there’s a scene where the female mechanic visits her boyfriend’s place, where she spends the night. This content isn’t explicit, however.