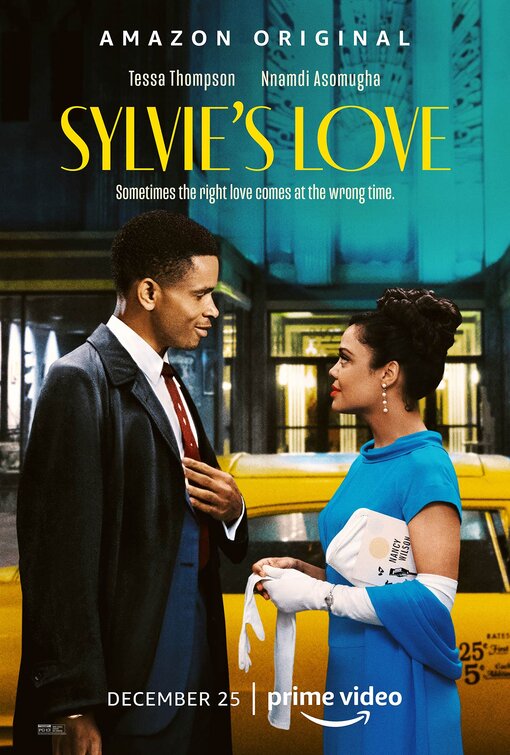 SYLVIE’S LOVE is an old-fashioned melodrama with a modern sensibility. Starting in the late 1950s, the movie follows a young woman, Sylvie, who falls for aspiring saxophonist named Bobby while working in her father’s Harlem record shop. Meanwhile, Sylvie struggles with her mother’s wish that Sylvie marry Lacy, the rich man to whom Sylvie’s engaged. As a result, Bobby is fired from the record shop. However, they still see each other. When Bobby’s quartet gets a gig in Paris, Sylvie discovers she’s pregnant but doesn’t tell Bobby. Five years later, Sylvie sees Bobby again. They take up where they left off, although Sylvie’s married.

SYLVIE’S LOVE is stylistically exciting, with fantastic sets, costumes and music. The performances are good, but the endless melodramatic beats and sometimes odd pacing take away from the movie’s compelling setup in the first act. SYLVIE’S LOVE celebrates romantic love and providing for one’s family. It also shows how lies lead to profound consequences. Sadly, though, these positive lessons are overshadowed by a continuous stream of implied affairs, sexual encounters and deceit. MOVIEGUIDE® advises extreme caution for SYLVIE’S LOVE.

(PaPa, Ab, Fe, B, C, L, SS, N, AA, D, MM):
Dominant Worldview and Other Worldview Content/Elements:
Strong, slightly mixed pagan worldview set in the late 1950s and early 60s where characters often deny that their actions have severe consequences, there is a hedonistic, unbiblical view of sex with many implied affairs, with some feminist elements where the lead female character eventually pursues career goals, mitigated by light moral, redemptive themes of the importance of honesty, providing for one’s family and showing grace to people who have wronged you
Foul Language:
Two “d” words, one “s” word, no profanities, and a brief racist conversation
Violence:
No violence
Sex:
Partially depicted fornication scene, an adulterous affair, many implied extramarital affairs, brief suggestive dancing, and the story is a romance and centers around one character not sharing that she’s pregnant out of wedlock
Nudity:
Brief upper male nudity, some dancers wear revealing clothing, two people appear in their underwear in bedroom scene, but camera cuts away Alcohol Use/Abuse: Consistent drinking throughout including bars, parties and at home, with several characters being seen drunk
Smoking and/or Drug Use and Abuse:
No drugs, but lots of smoking throughout to fit the time period; and,
Miscellaneous Immorality:
There’s a theme of dishonesty and deceit in regards to relationships throughout the entire movie.

SYLVIE’S LOVE, a melodrama set in the late 1950s and early 60s in New York, follows the romance between Sylvie, who wants to make it in TV, and Bobby, an aspiring saxophone player. SYLVIE’S LOVE has an old-fashioned style but awkwardly gives way to melodrama and a modern sensibility as the lead romantic couple keep secrets from one another and pursue an illicit affair after not seeing one another for five years.

The movie opens as Bobby and his fellow band members are in a recording studio in New York City. Sylvie is waiting outside a concert hall for her friend Mona and sees Bobby walk out of the building.

Cut to five years earlier Bobby and the band are eating breakfast in a small apartment somewhere in New York. Dickie, the band leader, is married to Carmen. The other three band members all live with them. Bobby says he needs to buy the new Thelonious Monk album. So, several of the band members go to Harlem.

Sylvie works at her father’s record shop in Harlem and loves television. She says she wants to make it in the TV industry one day. Bobby walks into the store to buy the new album, and Sylvie catches his eye. He’s instantly smitten with her and looks to work at the record shop as a part-time employee while playing sax in the band. Sylvie’s mother has steered her into an engagement with a rich man named Lacy. So, she at first rebuffs Bobby’s attention, but her father, the owner of the record shop, hires Bobby.

The quartet plays their jazz music and starts to get noticed, especially the genius of Bobby’s saxophone playing. Throughout the summer, Bobby gets closer to Sylvie, and the two begin to fall in love together. Sylvie sees Bobby play and realizes he’s a genius. However, Sylvie’s mom wants her to marry Lacy, and Bobby doesn’t fit that bill. As a result, Bobby’s fired from the record shop.

Despite her family’s wishes, the two keep seeing each other until Bobby and the band land the biggest gig of their careers in Paris. Right before he’s set to leave, Sylvie discovers she’s pregnant with Bobby’s baby. She can’t bring herself to tell him, however, and they part ways.

Five years later, Sylvie is married to Lacy and has landed her dream job as an assistant to a television producer. Lacy is rich and loves her, but puts his career over hers. Sylvie still can’t take her mind off the idea of Bobby, however.

As the two meet in front of the concert hall for the first time in five years, all the emotions of their past and Sylvie’s secret begin to occupy their time. Eventually, they discover the true nature of their love.

SYLVIE’S LOVE is stylistically exciting and hits the period atmosphere spot on with fantastic sets, costumes and music. The movie’s performances are good, but the endless melodramatic beats and occasional odd pacing take away from the movie’s compelling setup in the first act. SYLVIE’S LOVE celebrates romantic love and shows the consequences of dishonesty in relationships and how lies lead to profound consequences. The movie also promotes providing for one’s family and showing grace to people who have wronged you. Sadly, though, these positive lessons are often overshadowed by a continuous stream of implied affairs, sexual encounters and deceit. The movie also implies that Sylvie’s character arc toward a career and her old lover is founded on a form of feminist empowerment. MOVIEGUIDE® advises extreme caution for SYLVIE’S LOVE.