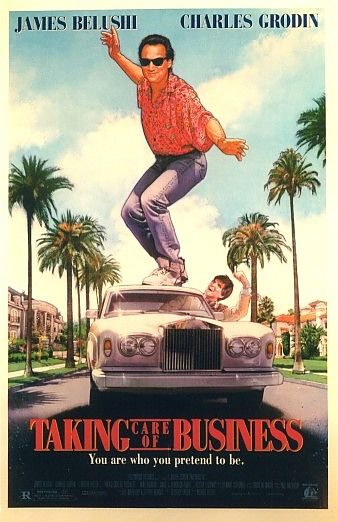 Upwardly-mobile advertising executive Spencer Barnes loses his precious day-planner and agenda en route to the most important business meeting of his career. Actually, the Filofax has fallen into the hands of Jimmy Dworski, a carefree, escaped car thief. With only one day left to serve on his prison sentence, Jimmy, an avid baseball fan, has taken a “temporary leave” from his minimum security cell to collect two tickets to the World Series that he won through a call-in radio contest.

Jimmy finds the appointment book and goes to Spencer’s Malibu beach home to collect the reward. Spencer, meanwhile, is trying to get there, too, but without his identity cards has trouble and is mugged. When a limo pulls up for Spencer at the beach house, Jimmy handily assumes his identity.

The switch leads to a comical whirlwind of error, mishap and mistaken identity, as Jimmy tries to restore the lost property to its rightful owner, collect the $1000 reward, attend a World Series game, and sneak back into prison, all before they notice he has escaped. Jimmy gets help from his fellow prisoners who are staging a riot in which they pretend, with the help of a tape recorder, to hold Jimmy hostage.

Aside from a brief scene where Spencer rejects an extramarital affair, there is not much good in TAKING CARE OF BUSINESS. Jimmy falls in love (lust) with the boss’ daughter, who is staying at the beach house. Brief nudity is shown, and they are featured under the covers having premarital sex as part of their developing relationship.

TAKING CARE OF BUSINESS is just one more example of wasting an excellent comic cast through inclusion of much objectionable material — vulgarities, profanities, obscenities, and sexual innuendo. Please write the distributor to let them know you will reward them with entertainment dollars only when they start producing comedies without elements that are destructive to building moral character.