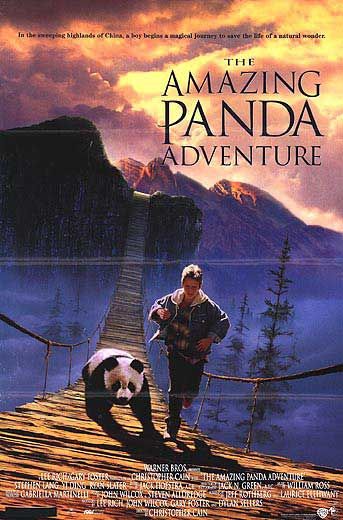 THE AMAZING PANDA ADVENTURE is filmed on location in China and tells the heartwarming story of a Panda researcher and his son as they try to stay one step ahead of poachers in reuniting a stray Panda cub with its injured mother. Aside from a very brief animistic prayer, it is a charming story suitable for children affirming the value of man, without excessive violence or foul language.

In THE AMAZING PANDA ADVENTURE, Michael Tyler is an American researcher in charge of a wilderness preserve in China dedicated to the breeding and preservation of Pandas. Tyler takes his job seriously and values pandas above all, even his own son. When his son, Ryan arrives for a visit, Michael forgets to pick him up at the airport. Michael and Ryan, then go to find an injured Panda who has just given birth to a cub. On finding it, they encounter poachers who shoot Michael in the leg and steal the baby Panda. Michael and the mama Panda get flown back to camp for medical treatment, and Ryan and Ling, a girl Chinese translator, and her grandfather go in hot pursuit of the poachers. Ryan and Ling get separated from her grandfather, and the remainder of the picture involves a race against time as the children try to flee with their own lives and reunite the starving cub to its mother so that it can feed.

This film could easily have slipped into a politically correct sermon on environmentalism, but it does not. Instead, it shows that relationships with people are more important than with occupational pursuits or animals. This film does show people in their native cultures, but it avoids exploring or endorsing other religions. Aside from a very brief animistic prayer, it is a charming story suitable for children affirming the value of man, without excessive violence or foul language.