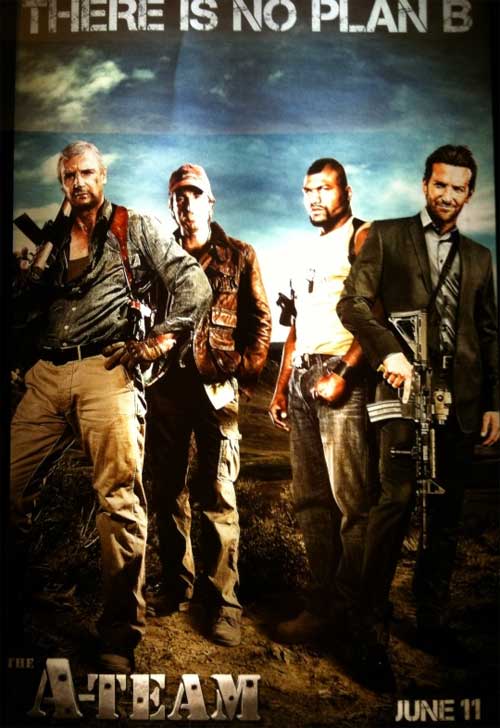 THE A-TEAM movie updating the popular TV show starts off with a bang and never lets up. An opening action scene introduces the four members of the A-Team to one another. Cut to eight years later in Iraq. The A-Team has become the Army’s go-to unit whenever a job requires audacious planning and execution. When they’re ambushed during their last job, however, the team is framed for hiding stolen plates for printing U.S. currency. Now, they must break out of jail, expose who framed them, and clear their names.

THE A-TEAM has many wild, exciting, thrilling action scenes. There are also some hilarious moments. Liam Neeson and Bradley Cooper do a great job as Hannibal and Face, but Quinton Jackson and Sharlto Copley as B.A. and Murdock are not as funny and interesting as the original actors who created their roles, Mr. T and Dwight Schultz. The movie also could use a better villain. A-TEAM has strong patriotic, Pro-American content with some implied positive references to God and Divine Providence. Regrettably, there are too many obscenities and profanities, and references to one character’s off-screen promiscuous activities. So, MOVIEGUIDE® advises strong caution.

(B, PP, Pa, LLL, VV, S, N, A, D, M) Light moral worldview with strong patriotic content and implied references to God and Divine Providence, marred by too much foul language and three pagan hedonistic allusions to sexual promiscuity; about 66 obscenities (including one “f” word seems able to be heard over some loud explosions and gunfire, but mostly “s” and “h” words), 11 strong profanities, three light profanities, and a longer “f” word is cut off twice so it’s not really said, only implied, and thus is not counted; strong action violence with some blood includes gunfire, explosions, fighting, falling from great heights, air battles, and one villain’s neck is crushed by a pile driver move; it is implied that one hero beds two women and slept with an old girlfriend who left the romance because it was getting too serious for her at the time; upper male nudity; alcohol use; character smokes cigar at times; and, villains steal, villains frame the heroes, villains commit treason, and the pagan philosopher Gandhi is quoted regarding non-violence.

THE A-TEAM feature movie, updating the popular 1980s TV show, starts off with a bang and never lets up. Though most of the action sequences are tremendous, with several actually being definitely jaw dropping, the movie is slightly off-target with some of its humor and morality.

The movie opens with a sequence showing how the four members of the A-Team meet. The future team members include Col. John “Hannibal” Smith, Templeton “Face” Peck, B.A. Baracus, and “Howlin’ Mad” Murdock. After rescuing Face from a drug dealer, the U.S. Army turns the four Army Rangers into a special ops team.

Cut to eight years later in Iraq and the A-Team is the Army’s special go-to unit whenever there’s a job that needs their quirky, audacious planning and execution. Working with a mysterious CIA man named Lynch, they go on a secret mission to stop stolen plates for printing U.S. currency and $1 billion, from being spirited out of the country.

The A-Team gets the plates and the money, but they are ambushed back at the base and the general who ordered them on the mission is killed. During the confusion, the money is blown up and the plates re-stolen.

The A-Team is framed for the new theft of the plates themselves. Now, they must break out of jail, expose who framed them, get back the stolen plates, and clear their names.

THE A-TEAM has many wild, exciting, intense action scenes. There are also some laugh-out-loud hilarious moments. Liam Neeson and Bradley Cooper do a great job as Hannibal and Face, but Quinton Jackson and Sharlto Copley as B.A. and Murdock are not as interesting as the original actors who created their roles, Mr. T and Dwight Schultz (who also created a memorable character on the STAR TREK series of the 1990s). Only a few times do Jackson and Copley seem to capture the old magic and humor of their characters from the TV show, which were the most outrageous, colorful of the four A-Team members. Also, since the movie doesn’t reveal who was really behind the theft of the currency plates until the third act, the movie lacks a real villain until then.

THE A-TEAM has way too many obscenities and profanities interrupting the flow of the story. Furthermore, unlike the TV series, the movie implies three times that Face, a ladies man, goes to bed with the women he seduces to carry out the A-Team’s plans and/or to satisfy himself. Thus, MOVIEGUIDE® must give THE A-TEAM a strong caution for this content.

Several times in the movie, however, Hannibal makes a point of saying that, even though it may not look like it, there’s always a Plan for everything. In the movie, this gives his famous catch phrase, “I love it when a plan comes together,” an implied reference to God and Divine Providence. Also, the movie is strongly patriotic and Pro-American. The A-Team proudly serves their country, even though they chafe at their false arrest and imprisonment. It’s too bad, therefore, that the excessive foul language and the implied references to promiscuous sex dilute and interrupt the movie’s exhilarating, fun qualities.