"The Consequences of Selfishness" 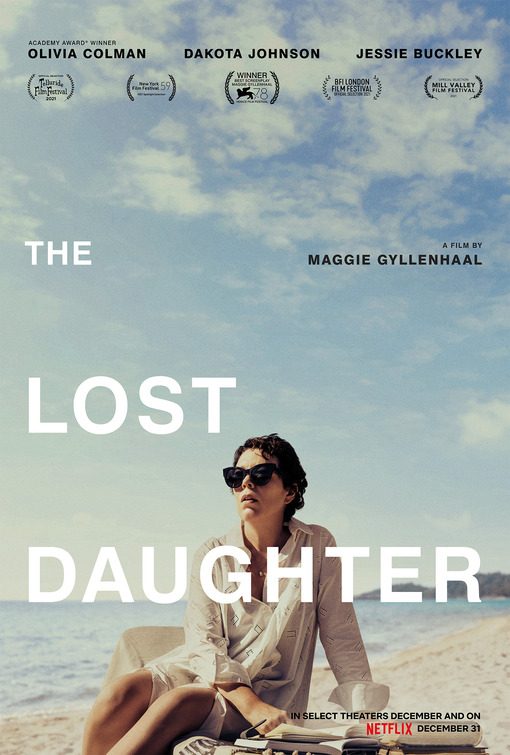 THE LOST DAUGHTER is a psychological drama based on a novel by Elena Ferrante. Leda is a middle-aged literature professor on a beach holiday in Greece. Leda enjoys the freedom, but a large family arrives to spend time at the same beach. Leda starts to observe the family, especially a young mother named Nina and her daughter, Elena. Elena goes missing one day. Leda ends up finding Elena and builds a relationship with Nina. However, as her stay continues, her new relationship reminds her of her own troubled past as a mother and wife.

THE LOST DAUGHTER is a well-acted drama about the inner turmoil of a mother and wife, and her desire for freedom. Leda abandons her children after having an affair with another man. While she returns to her children, the trauma and battle for freedom continue to haunt Leda. There’s no hope for Leda as she falls prey to her selfishness. Despite the negative consequences for Leda’s actions, THE LOST DAUGHTER contains little to no redemptive qualities, a negative view of raising children, and excessive sex and foul language.

(RoRo, B, LLL, V, SSS, NN, AA, D, MMM):
Dominant Worldview and Other Worldview Content/Elements:
Strong Romantic worldview with little redeeming elements, parents selfishly run from their responsibilities, and, although there are negative consequences and some examples of compassion, they are marred by self-seeking motives
Foul Language:
At least 48 obscenities (including more than 35 “f” words) and five to seven profanities (including a few strong profanities
Violence:
No graphic violence, but there are psychological horror elements throughout like gross imagery of insects, a mother verbally and physically abuses her children (while not graphic, these scenes are unsettling), a woman is stabbed with a hatpin, a woman is involved in a car accident
Sex:
Themes of adultery, a couple has sex, upper female nudity is shown and the scene is made more graphic through sexual language, another couple has sex with their clothing on, upper female nudity briefly seen while she lays in bed, a woman masturbates, but no nudity is shown, she is interrupted by her daughter, there are many examples of characters being unfaithful to their spouses, some conversations about sex, a child is washed in a bath, and, while there is no nudity, it could be uncomfortable for some viewers
Nudity:
Upper male nudity, upper female nudity, rear female nudity, and the movie takes place on a beach, so many characters are in bathing suits throughout the movie
Alcohol Use:
Drinking throughout, several scenes include drunkenness at a party, and at a restaurant
Smoking and/or Drug Use and Abuse:
A man smokes a cigarette, but no drugs; and,
Miscellaneous Immorality:
Aside from excessive immoral content, the movie also contains child abandonment, affairs, deceit, a negative view of raising children, and selfish actions (while some of these actions have negative consequences, they are prevalent throughout the movie).

THE LOST DAUGHTER is a new physiological drama based on the book by Elena Ferrante.

Leda is a middle-aged professor of comparative literature who’s on summer vacation in a beach town in Greece. A man named Lyle helps her move into a seaside apartment, and everything seems perfect. Despite having to work on her vacation, Leda is excited to work at the beach.

During her first visit to the beach, she meets one of the employees named Will. Leda enjoys the peace until a large family shows up and disrupts her peace. They are loud and intrusive to Leda, but she also enjoys observing the family’s dynamics.

A young mother, who Leda later learns is named Nina, and her daughter catch her eye. In flashbacks, the audience knows that Leda is also a mother to daughters Martha and Bianca. For some reason, seeing Nina play with her daughter makes Leda rather sad, which makes viewers wonder about Leda’s past.

After the family shows up, Leda notices things are not as perfect as they seemed upon her arrival. The bowl of fruit in her apartment turns out to be rotten, and she wakes up one night to find a cicada on one of her bed’s pillows.

Despite her discomfort, Leda continues to go to the beach. More family members show up and ask if Leda would be willing to move so that the family can sit together on the beach. Leda refuses, which doesn’t go over well with the family. However, they eventually work it out, and Leda apologizes for her actions.

The next day, Nina’s daughter, Elena, goes missing at the beach. Leda assures Nina that their daughter will be found. Leda finds Elena, and the family warms up to her and shows their gratitude. However, after Elena is found, the family says that they can’t find the girl’s favorite doll.

Will warns Leda not to mess with the family like she did when she refused to move on the beach, telling her that they are dangerous. When Leda arrives back at her apartment that night, it’s revealed that she took the girl’s doll. While Leda is in possession of the doll, flashbacks of her own experiences as a young wife and mother become more frequent and intense.

Despite Nina’s thankfulness for finding Elena, Leda consistently acts strange when asked about her own daughters. In a series of flashbacks, it’s revealed that Leda had some happy moments with her children, but that she abandoned them after she had an affair. It’s also revealed that she verbally and even physically abused Bianca, her eldest daughter.

Leda realizes that Nina symbolizes many of the things that she went through as a young mother, and she thinks that she can help. However, when Nina comes to Leda’s apartment to ask if she can use it to have an affair with Will, Leda shows her the missing doll. Nina is furious and ends up stabbing Leda with a hatpin, a gift from Leda. Leda is faced with her failures as a mother in pursuit of her selfish lust and her desire to love her children.

THE LOST DAUGHTER is a well-acted psychological drama about the inner turmoil of a mother and wife, and her desire for freedom. Leda abandons her children after having an affair with another man. While she returns to her children eventually, the trauma and battle for freedom continues to haunt Leda. There’s no hope for Leda and no respite for the audience as she continues to fall prey to her selfishness. Despite the depiction of negative consequences for Leda’s actions, THE LOST DAUGHTER contains little to no redemptive qualities, a negative view of raising children, and excessive sex and foul language. Media-wise viewers won’t enjoy watching this movie.