THE MATTER OF LIFE

"Inspiring Documentary about the Reality and Evils of Abortion" 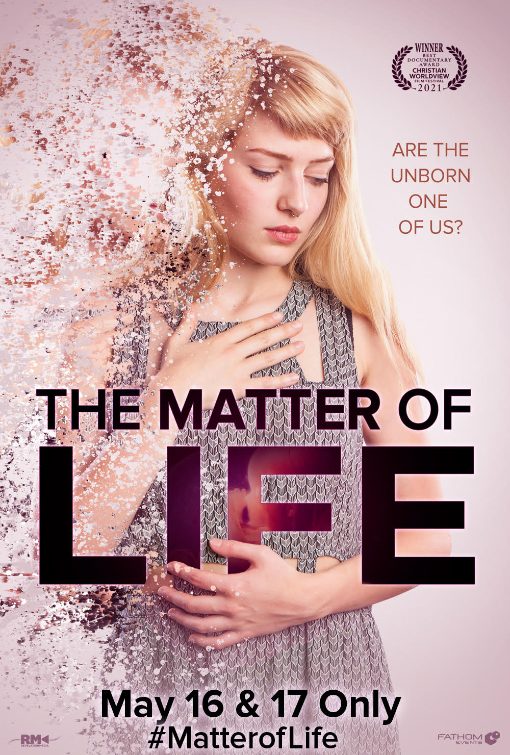 THE MATTER OF LIFE is a documentary that opens the viewers’ minds to question what they think they about abortion. The documentary is informative and filled with fascinating testimonies and interviews of authors and pro-life advocates. They ask big questions that make the audience think, such as: are the unborn like one of us, does every person have the right to life? The movie features real life testimonies of gynecologists who explain different abortion procedures. It explains the history of abortion, including the history of Planned Parenthood and the Roe vs. Wade case. Included is actual footage from aborted fetuses in the early weeks of pregnancy.

THE MATTER OF LIFE does a good job weaving the history of abortion with recent interviews of people from Planned Parenthood and activists who publicly support abortion as well as people who don’t. The use of color enhances the movie, with black and white photos of the people behind legalizing abortion. THE MATTER OF LIFE has a strong Christian worldview, with Bible verses and moral discussions. MOVIEGUIDE® advises extreme caution for the gruesome abortion images and adult discussion in THE MATTER OF LIFE.

(CC, BB, L, VVV, S, N, MM):
Dominant Worldview and Other Worldview Content/Elements:
Strong Christian, biblical worldview shows that the killing of innocent preborn children is wrong, but movie also gives moral, emotional and scientific reasons, which Non-Christians will find refreshing
Foul Language:
No obscenities, but there are some light profanities and mockery of God from pro-abortion people
Violence:
Some gruesome depictions of aborted babies, a description of a rape, a scene with a gynecologist performing an abortion, and woman throws an abortion sign into a pool
Sex:
Light level of sex includes several explanations of sex from the science of embryology as well as a description of a rape
Nudity:
No nudity, but some female cleavage and a cartoon image of a woman’s uterus
Alcohol Use:
No alcohol use
Smoking and/or Drug Use and Abuse:
No smoking or drugs; and,
Miscellaneous Immorality:
Strong miscellaneous immorality and behavior/worldview problems.

In THE MATTER OF LIFE, Writer/Director Tracy Robinson looks at the issue of abortion from both the pro-life and pro-abortion perspectives. Robinson begins by giving startling statistics that one in seven women who’ve had an abortion were church goers, and the hope that women who have had one will be treated with compassion and empathy from their fellow church attenders. She then asks a fundamental question that every viewer must answer. Does every person have an equal right to life?

Scott Klusendorf, CEO of Life Training Institute, is interviewed. He states no one is talking about the real idea that intentionally killing an innocent human being is wrong. He addresses the issue of blaming Christians for the problems in the world today. Alan Shlemon, author of STAND TO REASON, is also interviewed. He boils the topic down to the essential issue of whether or not the fetus or preborn baby is a human being or not. He makes an interesting statement: “If the unborn is not a human being, no justification for abortion is necessary. If the unborn is a human being, no justification for abortion is adequate.”

Examining the science of embryology, they then ask, “Is it ok for people who are older to kill those that are younger?” Stephanie Gray Connors, author of LOVE UNLEASHES LIFE, says that life begins at fertilization and reinforces her point with animal species like dogs and horses.

The movie then segues into the history of abortion, as well as the forerunners who propelled the legalization of abortion into law. It wasn’t until Playboy magazine came out, the first magazine that advocated for abortions on demand. By 1968, abortions were decriminalized in Colorado and California. Then, in 1970, New York made abortion legal. Finally, in 1973, the Supreme Court legalized abortion in Roe v. Wade decision.

THE MATER OF LIFE also brings to light a lesser known Supreme Court decision, Doe v. Bolton. This decision broadened the definition of the word “health,” meaning a woman could use it to justify an abortion, when abortions were only to be performed when a woman’s health was at risk.

The movie also highlights the career of Dr. Bernard Nathanson, a physician who was at the forefront of the Roe v. Wade decision, only to become a pro-life advocate later in life. Is also discusses the notorious eugenics and abortion activist, Margaret Sanger. Sanger made it her life’s mission to rid the world of children defined as feeble-minded or special needs. She wanted abortion to be the backup for people who couldn’t use birth control and started the first birth control center, later renamed Planned Parenthood, which now does 877 abortions a day, or one murdered baby every 97 seconds.

The documentary does a great job interspersing footage of news reports and interviews from years ago and footage of current interviews of advocates who are working to stop abortion. The cinematography effectively uses camera angles and facts to inform the audience about abortion laws, Planned Parenthood’s role in women’s healthcare, and teens and pregnancy. Its use of color highlights the forerunners of abortion in black and white and more recent abortion advocates in color. Tracy Robinson gives the facts about abortion in a refreshing way that informs viewers regarding its history as well as the consequences the prevalence of abortion will have on our world’s future.

It then explains the four barriers to abortions, Christians, parents, crisis pregnancy centers, and abortion workers. It highlights pro-life organizations such as Embrace Grace and Human Coalition to equip women and churches with the tools to walk with a woman through every step of her pregnancy. It ends with a heart-wrenching testimony from a gynecologist who performed abortions, then, through a tragic event, no longer performs them. He declares with certainty that killing innocent humans is wrong no matter how big or small they are and hopes no one has to experience the events he did to get them to see that.

The movie has an overarching Christian worldview. Although they provide perspectives from advocates who are atheists, the movie portrays life from a Christian standpoint and uses biblical references to support its claims. Having said this, this is one of the better documentaries that offers viewpoints from those who take a pro-life stance who are not Christians. It also offers resources for those who may believe abortion is the only option in situations like rape, as well as practical steps viewers can take to help end abortion.

All that said, THE MATTER OF LIFE is a movie where parents and Christians need to exercise caution. There are several scenes describing sexual content from a scientific perspective. There is also a description of rape, as well as cartoon scenes of women’s uterus and the actual abortion process. There are also some gruesome images of aborted fetuses. The movie discusses some other underlying moral issues such as greed, lust and exploitation. Because of these issues, parents should exercise extreme caution. No children under the age of 15 or 16 should watch THE MATTER OF LIFE.