THE MITCHELLS VS. THE MACHINES

"Touching and Exciting but Longwinded" 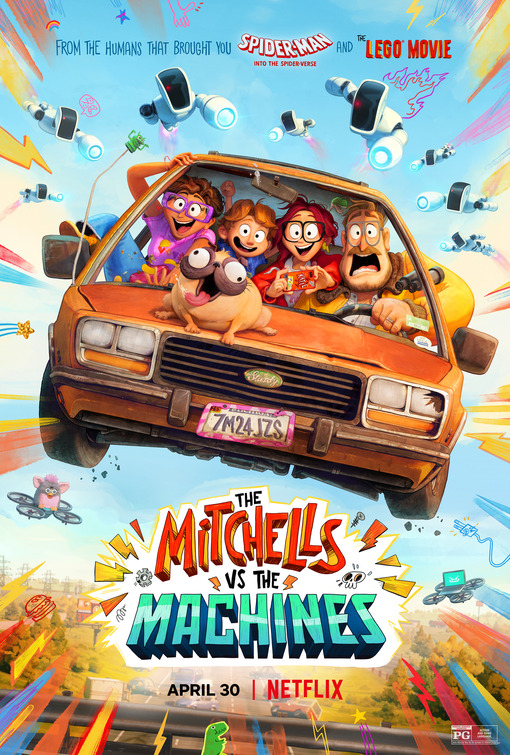 THE MITCHELLS VS. THE MACHINES is an animated science fiction comedy on Netflix. The quirky daughter, Katie, is accepted at film college, and her father decides the family should drive Katie to college to restore his bond with her. They stop at a dinosaur museum for Katie’s brother to enjoy. At the museum, a bunch of robots arrive and start forcing people into some pods. The Mitchells manage to escape and hide. Will they be able to join together, put aside their differences and quarrels, and save themselves (and the rest of world) from the malevolent robots?

(BB, Pa, Ho, VV, M):
Dominant Worldview and Other Worldview Content/Elements:
Moral worldview about sacrifice, getting a long and working together even in hardships, profamily about not abandoning your family, one character asks for prayer; family does yoga
Foul Language:
No foul language
Violence:
Robots shoot at people and take people captive, people falling from great heights, lots of jeopardy and peril, tennis racket hits man, and a man kicked in the private parts
Sex:
There’s an implied comment about a same-sex relationship in the middle of the credits, with many rainbow themes
Nudity:
Upper male nudity Alcohol use: No alcohol use
Smoking and/or Drug Use and Abuse:
No smoking or drugs; and,
Miscellaneous Immorality:
Lying and deceit, which is exposed.

In THE MITCHELLS VS. THE MACHINES, an animated science fiction comedy on Netflix, all Katie wants to do is get to film college. Her father decides the family should drive Katie to college, but, along the way, the family finds themselves in the middle of a robot apocalypse. THE MITCHELLS VS. THE MACHINES is odd and quirky in a fun way, with great animation and strong morally uplifting, pro-family themes, but the story is a bit too longwinded.

Katie feels like it’s hard for her to fit in with friends because she is a bit quirky. Her big passion is making movies and uploading them to YouTube. When she applies for film school, she is accepted and is extremely excited. The night before she goes to school, her mother prepares a final dinner for the family to enjoy together. Her father, Rick, suggests everyone get off their phones and devices while they eat dinner. An argument ensues, and Rick accidently breaks Katie’s laptop. Distraught, Katie goes to her room and shuts the door.

Later that night, Rick is watching old family movies and remembers the bond he had with his daughter before she became a teenager. In the morning, Rick decides that the whole family should drive Katie to college, instead of her flying there. Katie is unhappy she can’t get to school immediately and meet up with the friends she has made online who are attending the school.

The family starts off on their road trip. Katie’s mom, Linda, tries to get Katie and Rick to relate to each other, so they decide to make a movie out of the road trip. They decide to stop off at a dinosaur museum for Katie’s brother, Aaron, to enjoy. At the museum, they see some robots flying through the air. The robots come to the museum and tell people they can get in these pods, and there will be Wi-Fi. The people question this and don’t want to get in the pods, but the robots grab them and put them into the pods. Somehow, the Mitchell family is able to get away and hide from the robots. Katie soon figures out that the robots are coming from PAL, the tech company controlling almost all the world’s devices.

Will the Mitchells be able to unite, put aside their differences and quarrels, and save themselves from the robots trying to take control?

THE MITCHELLS VS. THE MACHINES is an interesting movie that has both the look of hand drawn animation and the look of CGI. The filmmakers decided to use these two looks to contrast the tech world, which looks smooth and perfect in CGI, with the human world, which looks imperfect and quirky using hand-drawn animation. Though the art direction is unique, the storyline is a bit convoluted and long winded. The movie overall could have been 25 minutes shorter, like other animated movies these days.

Despite this, THE MITCHELLS VS. THE MACHINES has some very morally uplifting themes about loving your family and working on relationships. It also has some touching scenes between the father and the daughter and stresses getting along and loving people, despite our differences and no matter how hard or difficult. The movie’s pro-family worldview has a message all parents would like – appreciating what your parents have done for you. However, the movie’s credits include a comment about an implied same-sex relationship. MOVIEGUIDE® advises caution for older children because of lots of jeopardy and peril in THE MITCHELLS VS. THE MACHINES.