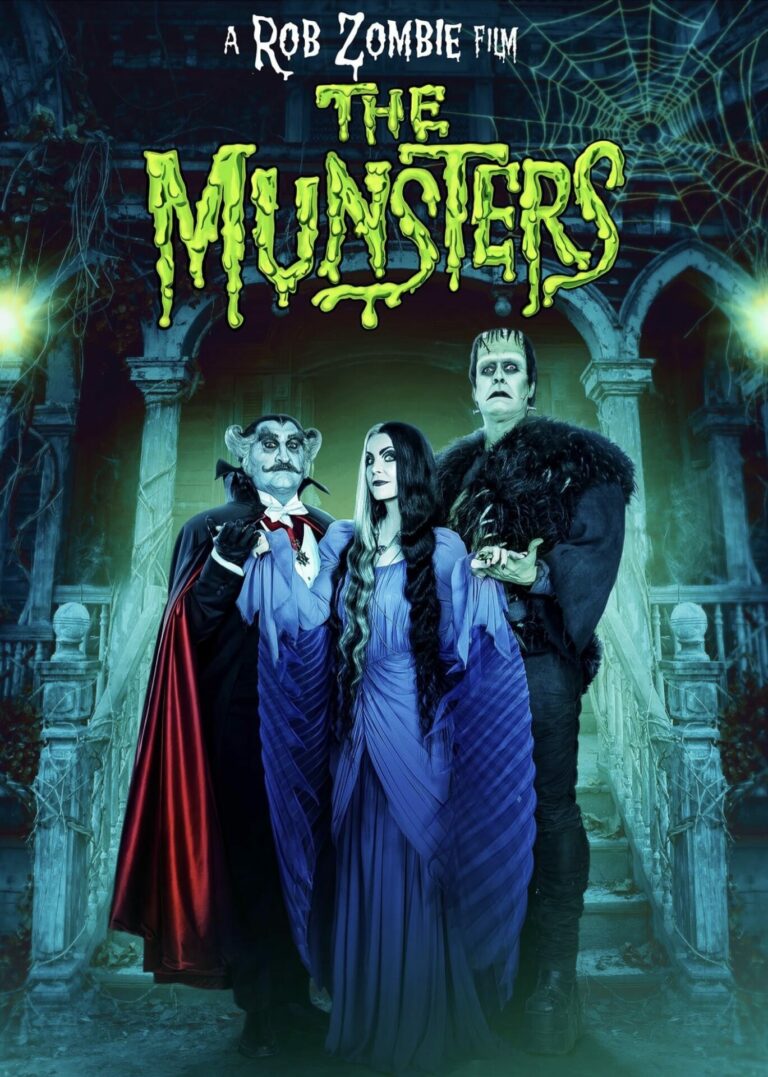 THE MUNSTERS is a Rob Zombie directed reboot of the popular 1960s TV sitcom. The reboot follows mad scientist Dr. Wolfgang and his trusty sidekick, Floop, as they try to create the perfect human. They rob graves to stitch together a super genius with an athletic build. However, Floop steals a standup comic’s brain, and their creation, Herman Munster, turns out to be a comic genius instead of a mental genius. Herman’s comical charm catches the eye of Lily, a female vampire looking for love. Despite her father’s disapproval, Lily and Herman leave Transylvania in pursuit of Hollywood.

Streaming on Netflix, the new MUNSTERS movie is a feeble attempt at a remake and lacks the original TV show’s charm. While the style is deliberately campy, the poor plot and mediocre performances can’t raise this movie from the graveyard of forgettable, shallow movies. On top of a lackluster story, THE MUNSTERS contains some off-color innuendoes, a couple bleeped-out obscenities and some scary images that push the boundaries of its PG rating. Families will pass up THE MUNSTERS for something more wholesome and entertaining.

(Pa, B, L, V, S, AA, D, M):
Dominant Worldview and Other Worldview Content/Elements:
Light pagan worldview about classic monsters like zombies, vampires, werewolves, mummies, and more, with light moral elements about a couple getting married, but this is marred by the shallowness of the rest of the movie
Foul Language:
Minor foul language like “crap” and an “a**” word and an “s” word are bleeped out for comedic effect, other characters make sexually suggestive jokes (see Sex category)
Violence:
Some slapstick violence, a zombie is killed by a spike to the forehead by a grave robber, and some of the costumes and makeup could scare younger viewers
Sex:
No sex scenes, but the Count/Grandpa reads a Playboy-esque magazine and makes light suggestive comments, plus a couple goes on their honeymoon and appear in pajamas, and, though they aren’t revealing, the scene could be awkward for younger viewers
Nudity:
No nudity
Alcohol Use:
Some characters get drunk, characters drink at a wedding, nightclubs, bars, drinking at dinner, drinking at a costume party
Smoking and/or Drug Use and Abuse:
Smoking is seen on a Woody the Woodpecker cartoon on TV; and,
Miscellaneous Immorality:
While there is no excessive violence, sex or foul language, the movie contains a hopeless, lifeless outlook on life with no real morals or beneficial takeaways for viewers.

THE MUNSTERS is a feature-length Rob Zombie adaptation of the classic 1960s television, now streaming on Netflix, about a group of monsters who leave Transylvania and travel to Los Angeles. The new MUNSTERS movie is a feeble attempt at a remake and lacks what charm the original show had, with some light innuendoes and some scary images that push the bounds of its PG rating.

The movie opens with mad scientist Dr. Wolfgang and his trusty sidekick, Floop, as they rob the grave of a famous concert pianist. Dr. Wolfgang steals the dead body’s fingers, and hints at a creation that he and Floop are working to bring to life.

In a separate storyline, a vampire known simply as The Count is trying to set up his daughter with a husband. However, his daughter, Lily, is a lot more picky when it comes to who she wants to marry and goes on a date with another vampire only to come home in a bad mood.

The movie continues to follow Dr. Wolfgang and Floop as they steal the brain for their upcoming creation. However, Floop chooses the wrong brain. Instead of the super genius brain that Dr. Wolfgang was hoping for, Floop steals the brain of the genius’ brother, a failed comedian.

When the time comes for Dr. Wolfgang to unveil his creation, Herman Munster, he soon realizes that while he is equipped with the “perfect body,” his brain leaves something to be desired. However, Lily sees Munster on the television and instantly falls in love. Despite her father’s apprehension of the new suiter, Lily pursues a relationship with Munster, who never runs out of the horrible jokes of the previous brain’s owner.

Lily and Munster decide to get married and go to Hollywood to get away from The Count and pursue their dreams together.

While the costumes and set design pay homage to the original series, this adaptation of THE MUNSTERS lacks a moral backbone, character development and any of the other story elements necessary to keep audiences engaged beyond the colorful sets and spooky, Halloween set pieces. THE MUNSTERS is a feeble attempt at a remake and lacks what charm the original show had without the benefit of shorter episodes. While the style is inherently campy, the poor plot and mediocre acting performances can’t raise this movie from the graveyard of forgettable, shallow movies. On top of a lackluster story, THE MUNSTERS contains some innuendoes, a couple bleeped-out curse words, and some scary imagery that push the bounds of its PG rating. Ultimately, THE MUNSTERS lacks substance, and media-wise families probably will pass it up for something more wholesome and entertaining.