THE SOUND OF VIOLET

"Quirky Comedy Turns into a Serious Drama About Human Trafficking" 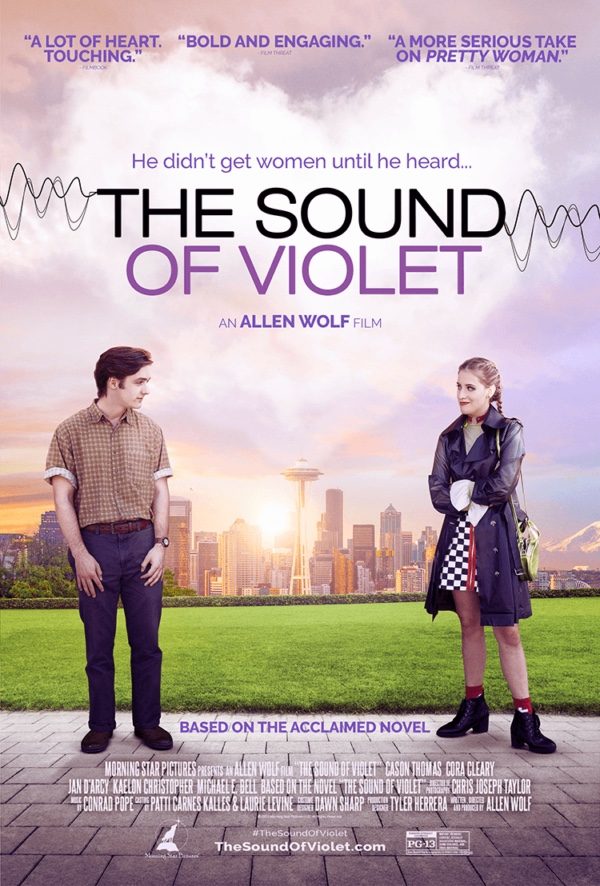 THE SOUND OF VIOLET is a faith-based movie for older viewers. Shawn is a high-functioning, young autistic man who’s trying to find the perfect woman through the dating app for which he does the programming. Shawn gets involved with Violet, a young blonde woman who’s been forced into prostitution but tells Shawn she’s an actress who goes on auditions. Shawn’s brother and his Christian grandmother try to discourage the relationship. Eventually, Shawn learns the truth about Violet. He tries to find a way to safely free Violet from the pimp who threatens her.

The beginning of THE SOUND OF VIOLET is a little creepy and silly. However, when it’s revealed that her pimp forced Violet to become a prostitute, the movie becomes an intense, redemptive story. The question is whether Shawn and Violet’s love can survive. THE SOUND OF VIOLET has a strong Christian worldview. It has two strong church scenes and features two Christian hymns. There are, however, implied and overt references to prostitution. THE SOUND OF VIOLET also has two “h” words and some violence. MOVIEGUIDE® advises caution for teenagers and adults.

(CC, BB, L, VV, S, A, DD, MM):
Dominant Worldview and Other Worldview Content/Elements:
Strong Christian, biblical worldview about a high-functioning but naive autistic young man living with his wealthy, widowed Christian grandmother who wants to find a wife because his grandmother isn’t going to be around forever, and he befriends and falls in love with a young woman who’s been forced into prostitution, but he doesn’t understand until later because she pretends she’s an actress, with two strong church scenes, a few biblical references, a Christian wedding scene, and a song about Jesus is sung, as is “Amazing Grace”
Foul Language:
Two “h” words, one light profanity, the word “hos” is used once or twice, and women vomits into toilet after being drugged against her will the previous night
Violence:
Pimp threatens people with violence, pimp punches and repeatedly kicks man when he’s down on the floor, woman has a black eye from an implied beating, and woman tells her boyfriend that a man forced her into prostitution and works with a local gang who will find and kill her and him if she tries to leave her pimp for him
Sex:
No sex scenes but implied prostitution, pimp traffics women and forces them into prostitution, and married autistic man and bride lie down in bed together on their first night, and wife places her head on his shoulder, and they wake up next morning, but later decide to have a proper wedding than the civil one they did
Nudity:
No nudity
Alcohol Use:
Two men and woman drink wine but the woman’s wine is drugged and some drinking in the background in two bar scenes
Smoking and/or Drug Use and Abuse:
No smoking, but a woman is drugged without her knowledge, and pimp tries to force woman to take pills and offers other drugs if she’s willingly stay with his “business”; and,
Miscellaneous Immorality:
Extortion, lying, woman steals man’s credit card but makes amends, leading male character’s Christian grandmother is selfishly unwilling to give her grandson’s girlfriend a chance to reform her life through Christ because of her past, and boss who runs a dating app.hires prostitutes for his parties to entertain potential male clients but he’s exposed and movie is hopeful that other people can convince him to turn his dating app into more of a marriage app.

THE SOUND OF VIOLET is a faith-based movie for older viewers about a high-functioning, but naïve, autistic young man who wants to find a wife but falls in love with a woman who’s been forced into prostitution but who tells him she’s an actress who goes on auditions. At first, THE SOUND OF VIOLET is a little creepy and silly, but when the movie reveals the woman has been forced into prostitution by a violent man, it becomes an intense, emotional, redemptive story about finding a way to safely free the woman from her terrible situation.

The movie opens with a high-functioning, young autistic man, Shawn, trying to find the perfect woman through the dating app for which he does the coding. Shawn lives with his wealthy, widowed Christian grandmother, Ruth, who encourages Shawn to do this, but Shawn’s quirky behavior repels the women he meets. For example, Shawn cringes whenever anyone touches him, even innocently, or gets too close. Hugs are out of the question.

Shawn’s brother, Colin, urges Shawn to attend one of his company’s regular parties for would-be clients interested in the company’s dating app. Shawn agrees to go if Colin will come with him.

At the party, Shawn meets a blonde woman named Violet. He lands what he thinks is a date with Violet, for dinner at his place. However, what Shawn doesn’t realize is that Violet is a prostitute hired by his boss to make clients happy at the parties. Violet mentions her hourly rate to Shawn, but the conversation goes over his head.

At Shawn’s place, Violent realizes that Shawn thought they were having a regular date. She gets a call from her pimp, Anton, for another appointment. She tells Shawn she’s an actress who goes out on “auditions.” Violet lets him ride with her in the Uber for her first appointment. When they get out of the car, she starts to say goodbye, but Shawn says he’ll wait outside for her. Shawn does that several times.

Shawn becomes fixated on Violet. He tells his grandmother and brother that Violet is an actress, but they don’t think she’s the right girl for him. They do everything they can do discourage the relationship. Meanwhile, Violet’s pimp, Anton, is making more and more demands for her time. Also, a flashback shows that Violet became involved with Anton’s prostitution business when he drugged her and blackmailed her.

Violet keeps up her ruse with Shawn that she’s an actress who does auditions. They grow closer to one another. Shawn thinks he’s found a potential wife, while Violet thinks she’s found a way to a brand new life.

However, Anton refuses to let Violet go. Eventually, Shawn learns the truth. He wants to help Violet get free of Anton, but Violet tells him Anton has a deal with local gangs to track down any woman who tries to get out of the prostitution ring.

The beginning of THE SOUND OF VIOLET is a little creepy and silly. However, when it’s revealed that her pimp forced Violet to become a prostitute, the movie becomes an intense, emotional, redemptive story about finding a way to safely free Violet. The question is whether Shawn and Violet’s love can survive this situation.

THE SOUND OF VIOLET has a strong Christian worldview. There are two strong church scenes, one with Shawn and his grandmother singing about Jesus, and one where Violet enjoys Shawn’s church singing “Amazing Grace.” Eventually, the story is about Violet getting a chance to repent, recover from the abuse she’s suffered and giving her life to Jesus. There are, however, references to paying money to spend time with Violet. Also, Violet is shown going to places to meet the male clients Anton has arranged for her. THE SOUND OF VIOLET also contains two “h” words, brief drug references and strong violence in one scene. So, MOVIEGUIDE® advises caution for teenagers and adults.