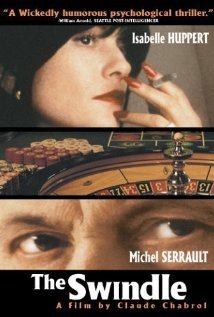 THE SWINDLE is an entertaining comedy of suspense about a con man and his younger female partner, who step out of their league in a multi-million dollar scam which leads to murder. THE SWINDLE gives no moral lessons about the unethical conduct of the protagonists and also includes implied fornication and some obscenities.

Pagan worldview of trying to make money by deceiving other people; 16 obscenities; one graphic scene of man dead in bathtub with ice pic in his eye & threats of violence; implied fornication; no nudity; alcohol use; woman drugs man's drink; and, stealing, lying & embezzlement.

Directed by Claude Chabrol, who is often called the French Hitchcock, THE SWINDLE is an entertaining comedy of suspense about a con man and his younger female partner, who step out of their league in a multi-million dollar scam which leads to murder. This subject matter is the biggest moral drawback in seeing this movie.

Acclaimed French actors Isabelle Huppert and Michel Serrault star as Elizabeth and Robert, a pair of con artists who have a pattern of working professional conventions and conferences. The story opens with Elizabeth seducing a businessman at a fancy gambling casino while doctoring his drink. When he passes out in the hotel room later, she and Robert take some of his money and some of his credit cards. Being too greedy is not good business, Robert believes, and business is thriving for this team of thieves. Robert in fact has a fatherly relationship with Elizabeth, and the two share a luxurious apartment.

Elizabeth, however, decides to take things up a level. She has a relationship with a wealthy man who is planning to embezzle money from his company and transfer it to a Swiss bank. When Robert finds out, he is quite upset because he knows this kind of job is out of their league. Or, is Elizabeth really trying to con her friend? And, is her rich lover being honest with her?

This charming but morally problematic movie will hold the attention of most viewers and is reminiscent of David Mamet’s HOUSE OF GAMES, an American movie about con artists. The chemistry between Huppert and Serrault is enchanting as they banter back and forth, giving THE SWINDLE a whimsical quality. At times, their stunts are a bit comical as they clumsily attempt to succeed in their new venture. There are enough twists and turns to keep the audience on its toes and thinking until the end.

Despite some implied sexual immorality and obscenity, the story is tastefully done, except for a gory murder scene in a bathtub. THE SWINDLE contains implied fornication between Elizabeth and the wealthy embezzler, but no nudity.

Of course, as in many, if not most, movies about thieves and con artists, THE SWINDLE gives no moral lessons about the unethical conduct of the protagonists. The movie gives no indication that being a con artist on any level is wrong. Instead, the point that Chabrol stresses is that one must learn his or her limits in the con artist game and that it can be dangerous to go beyond them.